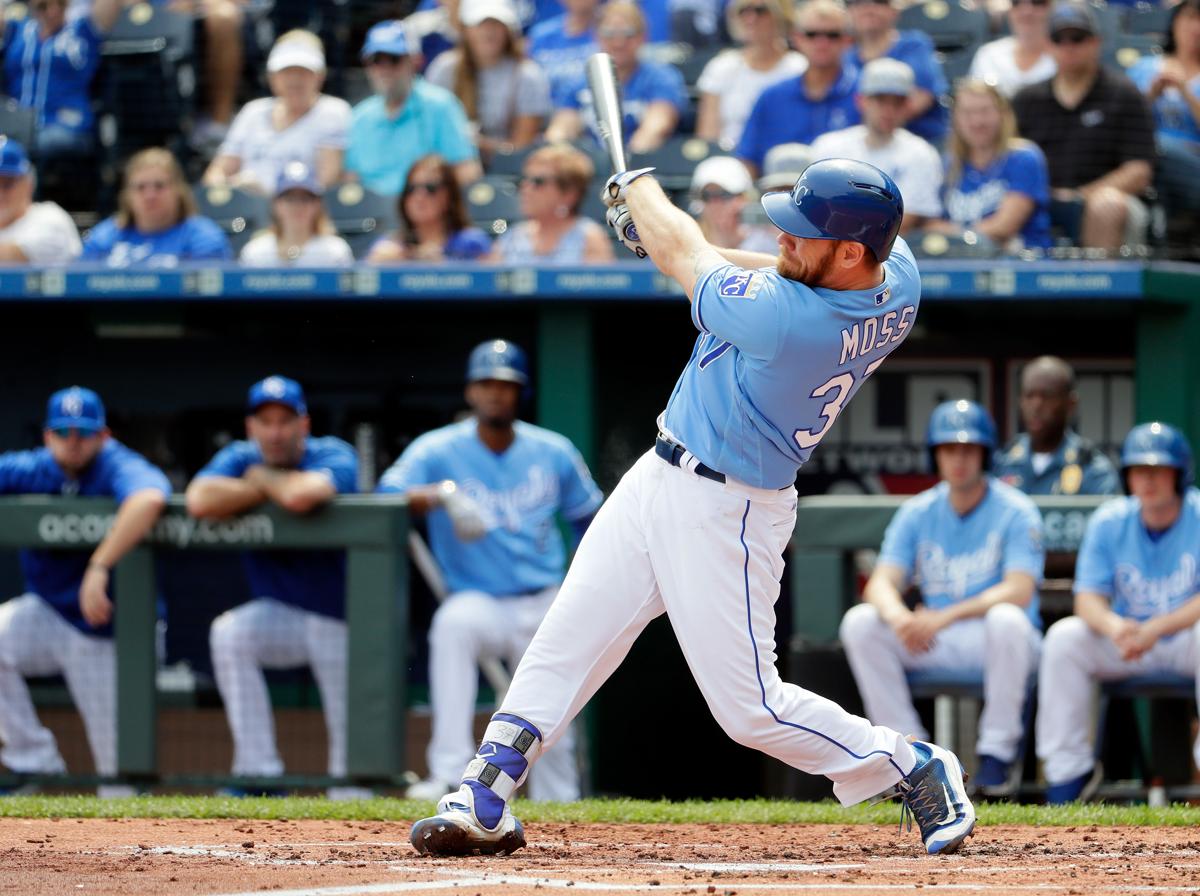 With Spring Training almost two weeks away, the Kansas City Royals swung another deal on Monday night, trading OF/DH Brandon Moss and reliever Ryan Buchter to the Oakland A’s for pitchers Jesse Hahn and Heath Fillmyer. Cash was also involved, as $3.25 million was sent from the Royals to the A’s. This frees up about $5 million on the Kansas City payroll, which already has some (like myself) speculating on why the Royals would want to do that:

So while the Hosmer rumors can now run wild (brother), let’s take a look at what the Royals gave up and are receiving.

Moss had a very underwhelming 2017, his only season in Kansas City. Moss posted a line of .207/. 279/.428 with 22 home runs, 50 RBI’s and an OPS+ of 84. Moss struggled out of the gate and it wasn’t until later in the summer that he started producing like the Royals expected. Moss will be entering his age 34 season in 2018 and while he would have seen consistent playing time somewhere for Kansas City (whether it was at first base or DH), he probably would have also been taking playing time away from some younger talent like Jorge Soler, Hunter Dozier or Jorge Bonifacio. While the move feels like a salary dump, it also allows the Royals to see what they have with Dozier or Soler without a veteran like Moss blocking them. While Moss didn’t have many memorable moments in a Royals uniform, he was always very honest about his performance on the field and never made excuses for the lack of production. My favorite Moss moment will be from Star Wars day at The K this past year. My wife, son and myself got to listen to a couple of fans give their “analysis” of Moss’ issues at the plate, which included the serious line of “he needs glasses; he can’t see the ball.” We listened for what felt like fifty innings to these two “special” fans rag on Moss non-stop. Then…he stepped up and hit a three-run home run. At that point, our “friends” left their seats and got out of Dodge. If anything, I became a Brandon Moss fan that day. But it wasn’t just Moss packing his bags for Oakland…

Ryan Buchter was the bigger catch for the A’s, as they can plug-in another lefty into their bullpen. While Buchter incurred a few issues during his short stint in Kansas City, he was a very reliable part of the Padres pen and has produced some great numbers these last couple of seasons:

Over the past two seasons combined, Buchter’s 16.7% infield fly ball rate (IFFB) ranks 10th in the majors among qualified relievers. He also ranks 14th during that span with a 26% soft contact rate against. Buchter is even tougher against lefties, limiting them to a .160/.255/.306 batting line during his MLB career.

The Royals started the winter with a couple of strong lefties in their pen, but with this trade and the trade of Scott Alexander, that depth has taken a big hit. The team still has Eric Stout, Brian Flynn, Tim Hill and Eric Skoglund as lefty options currently on the 40-man roster, and a prospect like Richard Lovelady could slither his way into the conversation this spring. While losing Buchter could be looked at as a loss, the Royals did get a couple of positive gains in this trade.

Jesse Hahn is entering his age 28 season for the Royals and looks to be an option as either a starter or a reliever. More than anything, Hahn just needs to stay healthy as he has dealt with various ailments over the last couple seasons. He pitched in only 14 big league games last year, producing a 5.30 ERA, 3.62 FIP and an ERA+ of 81. Early in his career he showed a lot of promise but the injuries have derailed his career since 2015. The Royals have been focusing on ground ball pitchers this winter, as they are looking to counter the rise of home runs in the league the last two years, and Hahn fits that profile. He’s produced a 49.7% groundball rate throughout his career and a slightly below hard hit rate of 28.3%. If he can stay healthy, Hahn could fit at the back of the Royals rotation in 2018 and either way will probably stick on the roster, since he is out of options.

Heath Fillmyer is the intriguing catch of this trade for the Royals, as he slides into the 28th best prospect in the Kansas City system according to MLB.com. Let’s start with the scouting report on Fillmyer:

Fillmyer has a quick arm and typically throws his fastball in the 92-96 mph range with good sinking action that nets him ground-ball outs and results in few home runs. He has a pair of above-average secondary offerings in a curveball, which he throws with tight spin and late bite, and a changeup, a pitch he made big strides with last season. Improved feel for repeating his delivery has led to him throwing more strikes, though he regressed with both his control and command in his first full Double-A campaign.

With his athleticism, big arm and feel for three average-or-better pitches, Fillmyer has the ingredients to become a No. 4 or 5 starter in the big leagues.

Once again, the Royals have put an emphasis on ground ball pitchers and Fillmyer is another that fits the mold. He dealt with some control issues in 2017 (his walk rate bumped up to 8.0%) but he will be entering his age 24 season this year and looks to be a good candidate for a bounce-back year. I wouldn’t be shocked to see him start the year in AAA Omaha when camp breaks.

This trade accomplished a couple of check marks off the Royals “to do” list. Acquiring Fillmyer helps them continue their goal of re-stocking the farm system, while adding Hahn gives the team another option in the rotation. Obviously dealing Moss was a way to pare down payroll, although it feels like a preemptive measure to help accommodate incoming payroll from a certain first baseman. While I wasn’t a big fan of the Alexander/Soria trade earlier this winter, this trade felt more like a solid gain (and possibly even a win) for Dayton Moore. I am fully on board with the team targeting ground ball pitchers and actually I felt that should have been done a couple of years ago. I also wouldn’t be shocked to see another trade in the near future, as veterans Jason Hammel and Kelvin Herrera could help the team shed more payroll and force the Royals overall to get a bit younger. We could also see a free agent signing…I mean, this is what these moves are leading to, right? Time will tell, but I wouldn’t be shocked if the team signs Eric Hosmer sometime in the next couple weeks. For now, this move was simply a way to dump some payroll while building up some pitching depth. At the end of the day, that is a positive.