In what has been a slow offseason that has seen the coldest of ‘Hot Stove’s’ we’ve ever seen, we needed a bit of a pick me up. Luckily, on Thursday we got one:

Cool feature of speed-up-the-game negotiations between MLB and players: The return of bullpen carts! Union has asked MLB to consider them, and MLB is considering it, where possible, as early as 2018 season.

That’s right: in 2018, we could see the return of the bullpen cart in baseball! The unfortunate thing is that baseball is not considering this because the carts are one of the coolest aspects of the baseball experience. No, no, no. They are wanting to bring it back to help the pace of play initiative going on within the game. But would it help? Luckily, the greatness that is Grant Brisbee looked into how much it could improve the pace of a baseball game:

That’s about two minutes. It’s not nothing. Slap together 20 changes just like it, and you have some real progress. Not to mention that the real tire-fire games probably have more mid-inning pitching changes, which means the dullest blowouts could be trimmed by five minutes, perhaps.

So there would be an improvement, even if just a slight one. But as I should have expected, Grant wasn’t done with ideas:

We’ll have lots of time to revisit the idea during the strike this year or next year.

Maybe they could have a drone carry the player to the mound.

What about a sled with wheels that’s pulled by 16 trained Alaskan Malamutes, all of whom are very good dogs?

I wouldn’t mind those dogs who let a monkey ride on their back pull some of these carts. Maybe that is too mean…maybe they could pull a Segway? a street luge? The Cardinals could go get a couple of Clydesdale’s to pull the cart…or what about pygmy horses? I hope Grant realizes he opened up a can of worms here. No matter the case, I am all for the return of the bullpen cart. I’m already looking forward to when the first cart dies near the mound and 30 minutes are spent trying to figure out how to get it off the field. That should improve that pesky pace of play! 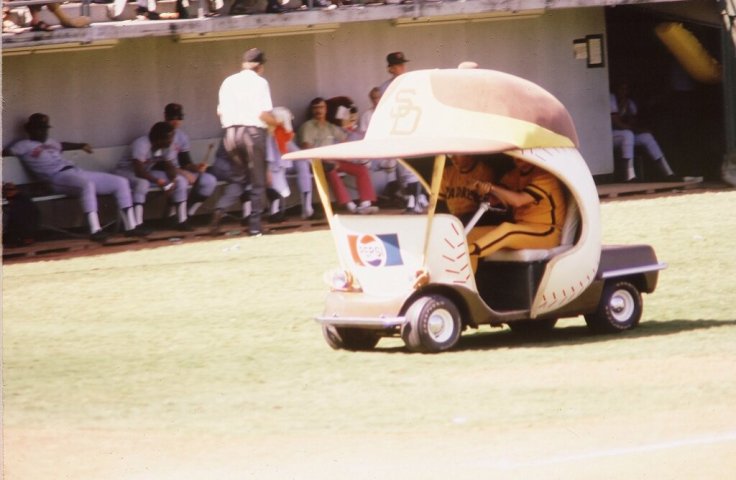 5 thoughts on “Call to the Bullpen”