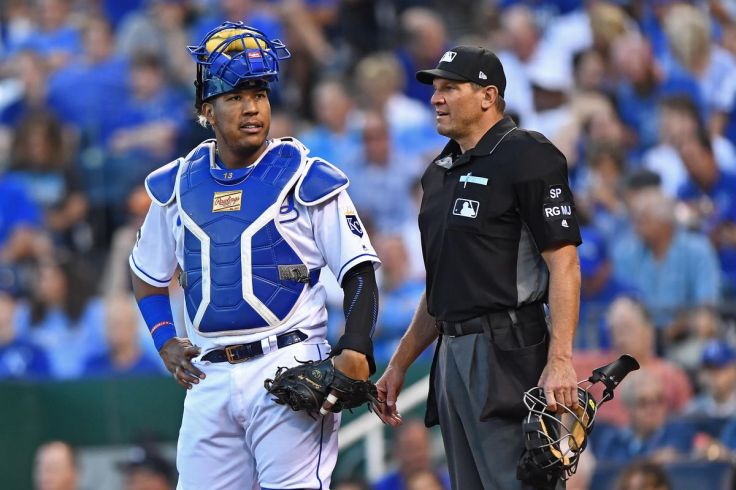 June was about as ugly a month as the Royals have seen in a long, long time. In fact, the offense was downright terrible. A few days ago, Max Rieper looked at just how pitiful the bats were last month:

They are last in all of baseball in slugging, second-to-last in on-base percentage, and last in home runs. They have drawn fewer walks than everyone but the White Sox, and are dead last in OPS with men on base.

The offense has been poor all season, but in June, the team took it to a new low. The Royals, as a team, hit .193/.253/.303 in the month of June. Three pitchers with at least 50 plate appearances last year hit better than that.

The numbers aren’t good and hope doesn’t appear to be looming on the horizon. But if there is one player that could help the Royals revive the bats, it would appear to be the lineup linchpin, Salvador Perez.

Salvy (like almost everyone else wearing royal blue and carrying a bat to the plate) had a bad June at the dish. In fact, it was bad enough that I almost wondered if his picture would show up on a milk carton, asking if you’ve seen his offense.

When I actually sat down to think about any specific at bat from Perez this month I drew a blank. In fact, I don’t even remember the last time we saw a Salvy-bomb. Turns out it was June 10th against Oakland, which feels like eons ago (thanks, Baseball Reference!). I faintly remember that, but numbers don’t lie and I’m not one to argue with a site that supplies me baseball stats.

The numbers don’t get much better when you look at the entire spectrum of 2018. Perez has hit .212/.253/.388 coming into play on Monday and saw his slugging percentage dip below .400 last week. His numbers almost across the board would be the worst of his career if the season ended today and the only season in his big league career that compares was 2014, where he hit .260/.289/.403 with an OPS+ of 91.

Some of this really isn’t too far off course. He has only had one season out of the last four where he produced above league average OPS+ and that was last year. His walks and strike outs are on par with what he has done the last couple of seasons. Even his AB/HR percentage and extra base percentage is comparable to almost every year beside 2017. So while the numbers tell the story of a player having a bad season, it also appears to be saying that he isn’t too far off from what we should be expecting.

It’s even fair to say in some regards he is doing a number of things right. Salvy’s line drive and fly ball rate line up with what he has done in the past and his hard hit rate is the highest of his career. In fact, according to Baseball Savant, Perez is barreling the ball at the highest rate of his career with an increased exit velocity:

So why are the results just not there for Salvy?

The first thing I noticed was a lack of luck. Perez has a feeble .223 batting average on balls in play, a number that shows that while he might be hitting the ball hard they are also turning into outs way more often than not. BABIP is predicated on luck most of the time and a few balls hit into the gap or down the line can make a difference between a solid number here or a weak number there.

It’s interesting to note here that Perez is swinging at less pitches within the strike zone while making more contact on the ones he is swinging at. One has to wonder if he swings at a few more pitches that actually are strikes and stays a bit more patient on the ones that are outside the strike zone (especially those outside and low pitches he loves to hack at), if some of these numbers would start to turn around.

I’ll go a step further and say that if he combined that with his hard hit rate and maybe (just maybe) a dash of better luck on the balls he hits into play, Salvy could go from being the ‘disappearing hitter’ he was in June to helping ignite what little offense the Royals can muster on a consistent basis.

The problem in all this lies in what we know about Perez, which is that patience is not one of his strong points. He has never been one for consistently ignoring pitches that entice him that aren’t strikes. Salvy is the definition of ‘see it and swing it’ and at this point in his career it is uncertain whether or not that can be changed.

The one thing for certain is that the Royals need him to get on a hot streak and soon. The framework is there, as evidenced by the hard hit rate and exit velocity. Now he just needs to be a bit more selective and hope that his luck takes a turn for the better. If not, it could be a long summer for Salvy and the Royals.

3 thoughts on “The Struggles of Salvador Perez”