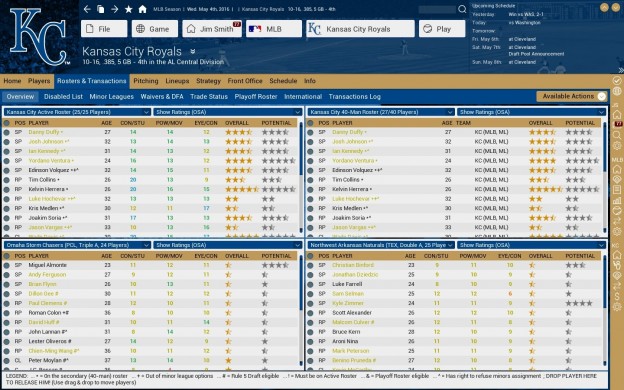 Hi, my name is Sean and I am addicted to ‘Out of the Park Baseball’. What is that, you might be asking? Here is the tagline they use on their website:

Out of the Park Baseball is the best baseball management game ever created. Can you guide your favorite baseball team to glory? Win the World Series and build a dynasty?

In other words, OOTP Baseball is the “World’s most realistic sports simulation game”. There are a number of different options of how you can you play this game: you can be the manager, the General Manager, you can play a real league, a fictional league, or an international league…and that is just the tip of the iceberg. If you have ever wanted to know how you would do managing and/or running a major league team, this is the game for you. The thing is, once you get into it, it’s hard to stop. Last year I started a Kansas City Royals franchise, beginning with the 2016 season. That wasn’t a banner season for my team, as they struggled with injuries and a bit of regression, finishing the year 76-86. So going into 2017, I had the majority of the same roster with a number of minor tweaks. Much like the real life Royals, I knew after the season I was going to have a hard time re-signing a large chunk of the core group, but was hopeful they could get off to a good start and put myself in a good position after the season. Unfortunately, that did not happen.

Instead, I got off to a horrible start. My team went 4-14 in April and while the offense was struggling (once again, sound familiar?) the pitching is what was really hurting me. My starters ERA was over 5.00, relievers were close to 5.00. I knew I would be wheeling and dealing, but wasn’t for sure when I would start the fire sale. I had made a few minor trades in May: I dealt Jason Vargas to the A’s and Alcides Escobar to Arizona, picking up Ryan Madson and Mitch Haniger. Nothing ground shaking but slight adjustments. But on May 24th, with my team 12-26 and 12.5 games out of first place in the American League Central, the fire sale begun. Within a matter of days, I had dealt Eric Hosmer, Lorenzo Cain, Kendrys Morales, Kris Medlen, Jason Frasor and Jarrod Dyson.  In return, I went out and made my team younger (and coincidentally, cheaper). For those players I was able to acquire Cody Bellinger, Aaron Sanchez, Randall Grichuk, Blake Snell and Lucas Giolito. In one fell swoop I had improved my rotation while also re-stocking my lineup with enough young talent to keep a low payroll for at least a couple of years. I also recalled a number of young prospects to fill out the team, as Kyle Zimmer, Bubba Starling and Ryan O’Hearn all became regulars on my team. I figured if I was going young, might as well go all the way. I accepted that my team would be bad for at least the remainder of the 2017 season, but I would reap the benefits in the future. My goal was to let these players play and let them get the experience they needed. So how is that working out? 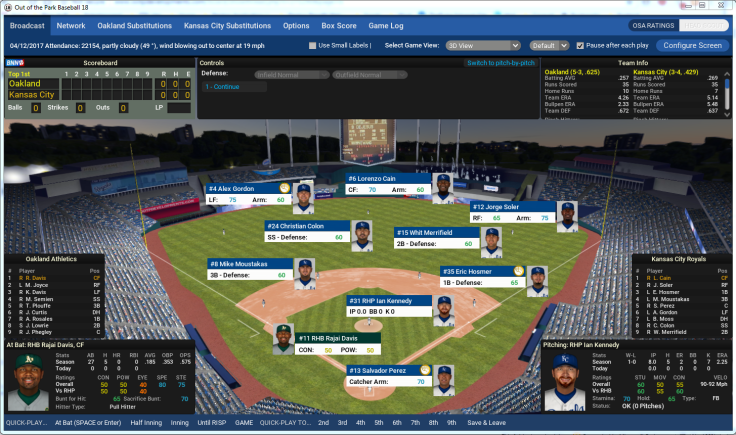 My team, as expected, is still bad. My record on June 5th (when the final deal went through) sat at 15-33; since then I am 12-16. It’s still under .500, but there has been a slight uptick. The youngsters are struggling at times, but at other times they are excelling. The starting pitchers will have a good outing followed by a bad one, while the hitters will go through a stretch where you see improvement while struggling just a few games later. I understand it is a process and don’t expect a huge improvement instantly. Speaking of, my pitching numbers have slightly picked up since all the trades were made and between that and the defense, there have been less blowouts and more close games, which have been split when it comes to success rate. Instant gratification won’t be found here, but I feel better about my team’s future and feel I did the proper moves to help my team in the future. That is where the connection to the real life Royals comes in.

This whole article has been building to this one big question: how does this game I play reflect on what is going on in real life this season for the Kansas City Royals? Very simply, the Royals are playing themselves out of contention this year and pushing themselves in the direction of a seller rather than a buyer at the trade deadline. Do I think Kansas City can go out, deal their valuable parts the way I did and get about the same return? Probably not. Mine is a game on a computer that has different values than a real GM and also is missing out on the human element. I was able to acquire top-notch prospects like Bellinger and Giolito; the Royals could only hope to pick up prospects of that ilk. But what they can do is get what they can and decide if what is being offered for the likes of Hosmer, Cain, etc. is better or less than the draft pick they may (or may not) get the following year. It is a tough line to straddle and I don’t envy the position that Dayton Moore is in. I struggled with my game on whether I wanted to throw up the white flag or move on. Eventually, I gave in and decided to start the rebuild now. In my estimation, that was a better route for my team; what is the better direction for the Royals in real life?

Here is the honest truth: this time next year, the Royals will look completely different from where they currently stand. Royals fans need to brace for the fact that there is a good chance the team isn’t able to keep Cain, or Hosmer, or Moustakas or Escobar…and that’s not a bad thing. While rebuilding is scary, it is also a reality in today’s game, unless you are a team with endless money. In my eyes, if this Royals team is still slumbering around by late June, then they are probably better dealing off what they can and start moving in whatever the next direction is for this team. Avoiding the inevitable only makes for more suffering and bigger heartbreak. It might appear on the surface that it is easier to tear down a team on a computer simulated game; in reality, it is not as hard to do in real life, with focus, determination and a clear, precise direction. The first question Moore needs to ask himself (and he probably already has) should be ‘where do we want to be ‘x’ years down the road?’, which should be followed by ‘how do we get to that point?’. Start there and begin to move forward. We are getting closer and closer to just pulling off the band-aid and dealing with the pain.