Back in 2015, lady luck was on the Kansas City Royals side. The bounces went the Royals way and in some ways led them all the way to a world championship. So far in 2017, it appears lady luck is “ghosting” Kansas City in a very passive-aggressive manner. The offensive scuffled in April, the relief core, while improving, isn’t a lock anymore and injuries have been a bit more normal. In that vein, the Royals were dealt their biggest blow so far in this short season, as Danny Duffy will miss the next 6-8 weeks with a Grade 1 Oblique Strain suffered in Sunday’s loss to Cleveland:

After getting past the depressing part of this injury (no team wants to lose their top starter for an extended period of time), it is easy to ask the most important question at the moment: where do we go from here?

First, let’s digest just what the Royals are missing with Duffy out. Duffy has posted a 3.54 ERA over 68 innings (2nd best in Kansas City’s rotation), an FIP of 3.43 and a fWAR of 1.4 (which is already halfway to his 2016 total). Duffy has seen his K rate go down while his walk rate has increased, but that is also factoring in that he was a reliever for the first 5-6 weeks of last year. Also, he had seen his strike outs increase over the last couple of starts. He has also induced less hard contact this year (down to 28.3% from 36.6%) while his WPA is already at 1, almost halfway to last year’s 2.34. To go even further, if you average out his game scores (taking out his three worst starts, including Sunday’s), he has an average game score of 65 over 8 starts. To put it another way, Duffy is the ace of this staff and was showing his 2016 wasn’t a fluke. It’s pretty obvious that moving forward, it will be difficult to replace his production.

Speaking of, who will get the honor of taking Duffy’s spot in the rotation? There are at least a few options available to the Royals, starting with Jake Junis. Junis is a control pitcher who cleaned up his delivery and improved his arm speed last year and made him self a more deceptive pitcher. Nothing pops out about Junis, as he has an average fastball and curve with a slightly below change and slider, but with the improved control it made all of those pitches a bit sharper. Junis made his first major league start on May 21st (after two relief appearances) and went 4 2/3 innings, giving up 5 hits and 2 runs while striking out 4 and walking 3. The most impressive part of this start against Minnesota was his ability to locate and to move the ball around the plate. To me, Junis should be the Royals first option, but there are a few more for Kansas City to consider if Jake isn’t a good fit. Eric Skoglund will make his major league debut on Tuesday and has an opportunity right now to step up and make an impression. Skoglund is the 4th best prospect in the Royals farm system according to Baseball America and the 6’7″ lefty is similar to Junis: above-average fastball, average curveball, below average slider and change-up but has impeccable control and location. Earlier in the spring I felt like Skoglund could be a nice addition to to the bullpen at some point this year, especially as a lefty specialist. Now he has an opportunity to lock-down a spot in the rotation. 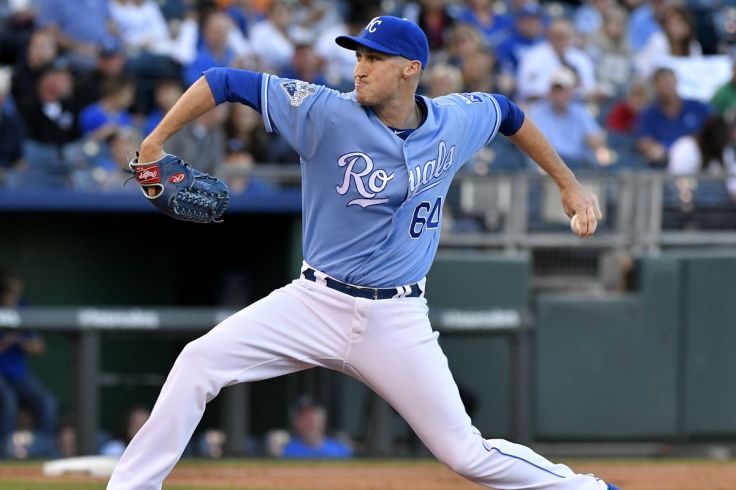 Unfortunately, when it comes to the bullpen, there really aren’t any relievers that could slide into the starting role and be productive. Chris Young has been given a chance to start this year and failed badly: two starts, only 6 2/3 innings thrown while giving up 9 runs (3 home runs). Travis Wood is a former starter who was thought of as an option to start if an injury happened to someone in the rotation, but with his performance this year I highly doubt the Royals would give him a chance to start at this point. An interesting, out of the box idea would be to slot Matt Strahm as a starter. Strahm was a starter coming up through the Royals minor league system and the team envisions him as a future starter. The one issue with that would be that Kansas City would have to stretch out his arm, which would probably involve a trip to Omaha to spend a few weeks before slotting him in as a starter. Although…if you remember last year, Duffy was moved from the pen to the rotation and the length of his appearances were determined by his pitch count. Conceivably, the Royals could do the same thing with Strahm. I highly doubt this happens, but it is an interesting thought.

There is one final question being bandied about when it comes to the Duffy injury: Is this the final nail in the Royals contending coffin? You won’t hear me shouting ‘this is the end’, but it’s not looking good, folks. Losing Duffy is a big blow and just having his presence on the mound and in the dugout is a confidence builder to this team. Not having him around hurts and there is no actual ‘replacement’ for him. At this point, it is all about how the Royals perform with Duffy gone. If the team can get some production out of guys who haven’t done much at this point in the season (Read: Gordon, Alex or Escobar, Alcides), that will help. If a guy like Skoglund can step in and perform admirably, then that will help. If none of this happens, we will be discussing trade options in a month’s time. It all comes down to performance and the direction this team takes moving forward is performance-based.

Losing an elite pitcher the caliber of Duffy is something no team wants to ever deal with, but here we are. All the Royals can do is hope the rest of the rotation (and offense) step up and pull some of the weight Duffy has been carrying. This was supposed to be the last year for this group of players who brought gold back to Kansas City. The band was tuning up for one more tour and Danny Duffy was supposed to be a big part of that. As a fan, I hate that a player who I have grown to adore won’t be able to go out on the mound every fifth day and make hitters look silly. The earliest Duffy will return is after the All-Star break; let’s hope we are talking about how the injury to Duffy woke up the Royals as they made a run to the top of the American League Central. Hopefully…hopefully when he returns he can recognize the players he calls teammates. Kansas City, it’s time to step up. It’s time for someone to get ‘Gnar’.

2 thoughts on “Duffman Down”