Late this winter, Kansas City Royals General Manager Dayton Moore was on a mission to go out and find starting pitching to fill the void left by the passing of Yordano Ventura. The team had already acquired Nate Karns but they would need more pitching if they were to contend in the American League Central in 2017. Luckily, ownership allowed their wallets to open a smidgen more and the team went out and signed Jason Hammel and Travis Wood to give the rotation more depth than they have had in years. With the first month out of the way (and a frustrating month it was), let’s see how the newbies are performing for Kansas City.

Let’s start with Hammel, or as I call him ‘Hochevar 2.0’. So far in 5 starts, he has an ERA of 6.65 over 21 innings, which is averaging out to a bit over 4 innings pitched per outing. Comparing his numbers to his 2016 in Chicago, his strikeouts are on par with last year while everything else looks drastically different. Down so far this year is his HR/9 and ground ball rate, as is his FIP. Unfortunately, the batting average on balls in play this year has skyrocketed to .384 and his line drive rate has moved up a bit as well. The good news is that while this is going on, the hard hit rate against him is almost identical to last year (32.4%) while the soft hit rate has jumped up 3% to 21. 6%. This combined with the BABIP tells me that he is dealing with a bit of bad luck and should see some of those numbers even out as the season progresses. I’m not too worried about the higher fly ball rate and lower ground ball rate, since the Royals have a big ballpark at ‘The K’ and their outfield is normally above average defensively. One concern I do have with Hammel so far is his walk rate, which has jumped to 12%, compared to 7.7% in 2016. Hopefully this is just an outlier, since he has never had a walk rate higher than 10.4 % (2007) in his career. A lot of his struggles early on can be traced to the high rate of walks and Sunday was a good example, as he walked 3 in the 3 short innings he threw. If he can lessen the amount of bases on balls and receive a bit of good luck on balls in play, his numbers should be more than acceptable for what the Royals need from him this year.

Travis Wood on the other hand has been a walking nightmare. There has been nothing statistically that really looks promising for Wood so far in 2017, as he has seen everything rise that shouldn’t: walk rate, hard hit rate, ERA, FIP and BABIP. In 9 games he has only thrown 5 1/3 innings and has allowed more hits (9) and walks (8) than innings thrown. The curious part for me when it comes to Wood is his splits. In 2016, Wood was crazy successful against lefties (.128/.208/.239) compared to righties (.265/.344/.521). This would seem to imply that if manager Ned Yost is using Wood out of the pen, he should primarily face left-handed batters. Instead, he has faced righties 20 times to lefties 13, with righties hitting .400/.550/.733, walking 5 and allowing 6 hits. But Wood hasn’t been much better against lefties so far this year: .300/.462/.400 with 3 hits and 3 walks. Wood has been mentioned before as a possibility later in the season if a starting pitcher goes down, but I’m not for sure he would be a great option at this point. I would still recommend he mainly face those that are left-handed, but Yost also has to figure out a proper way to use him, as he has only pitched in 3 games over the last two weeks. The Royals are committed to Wood through 2018, so hopefully he can turn things around and show some of the magic he had in 2016. 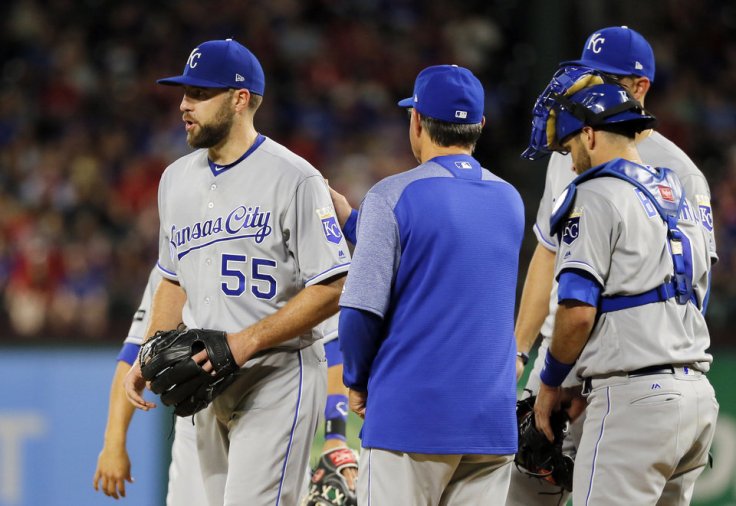 Nate Karns has been a bit of a mixed bag for Kansas City so far. Over 23 innings, he has improved on his walk rate while inducing more soft contact. Ground ball rate is way up while his fly ball rate is down, which would be good if his home run to fly ball ratio wasn’t 30%. The big thing with Karns has been a decline in his strikeouts and it can more than likely be a cause of his pitch usage. Karns is throwing his fastball just as much as last year (both at 52.7%) but his changeup usage has doubled, bumping up to 20.5%, while he has only been using his curveball 26.9% of the time (compared to 36.4% in 2016). Why is this important? Because Karns has a lethal knuckle-curve that is a game-changer and much of his success the last few years has hindered on it. So it shouldn’t be a surprise to see his struggles considering how little he is using the pitch that everyone gushes about. If Karns start using his knuckle-curve more, I can almost promise his numbers will start improving exponentially.

So with one month in the book, the 3 big pitching acquisitions haven’t blown anyone away, but 2/3 of them could see some increased success with a slight tweak or two. I would expect Karns and Hammel will get their numbers by the end of the year, while Wood has a long road to prove his worth. The positive is that one month does not make a season and all three have the next 5 months to show Kansas City what they’ve got. By no means should anyone count them out yet, especially since the Royals need them and will give them every opportunity to show their signings were worth it.