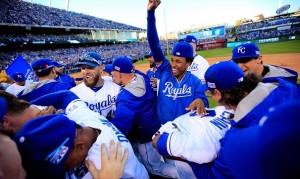 It’s that time of year, where the leaves turn colors, the hoodies are dragged out of the closet and, if you are lucky, your favorite baseball team can start thinking about the playoffs. This also means that as a fan you can start piecing together how you think your team’s playoff roster will look. As a Kansas City Royals fan, we never knew this was a ‘thing’, since up until last year we never had to worry about the Royals playing October baseball. But with Kansas City’s magic number currently sitting at ‘3’, it is pretty safe to say they will be playing past October 4th and hopefully deeper into the postseason. With that said, I was asked over the weekend what I thought the Royals playoff roster would look like. So here is my guess, although to be honest it looked a bit different than on Friday. 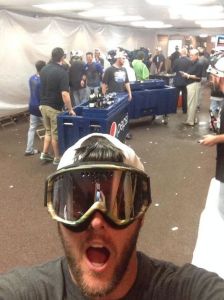 Obviously, this was fairly easy, since you have the four starting infielders and a backup. Originally I felt like Omar Infante would get picked over Colon, despite the fact that Colon is more versatile whereas Infante is solely a second baseman. Then Omar came up with an oblique injury on Friday, which could sideline him for close to a month if not longer. As most also know, Zobrist can also play the outfield so he could almost be counted as an infielder and an outfielder if necessary.

There was some debate just a week ago that Rios could be on the outside looking in for a roster spot due to his poor performance most of this year. Then he went out last week, continuing his hot hitting since his return from the chickenpox(which is not a minor league team in the Frontier League) and pretty much sewed up a spot for the playoffs. In my mind this pushed Paulo Orlando off the team, as I think the Royals will want Jonny Gomes’ bat for pinch hitting late in the game or against a tough lefthander. I had an argument with someone over Gomes being on the team, as I am of the belief that he was acquired for the sole purpose of being used in the playoffs while this other person who will not be named believes he won’t because the Royals aren’t using him much. I guess we will see, but in the playoffs I can’t see the reasoning behind six outfielders, or having Orlando on the team for solely defensive purposes. But, there might be a spot for him otherwise, which I will get to later.

This seems pretty self-explanatory, especially once Danny Duffy was sent to the bullpen. I still laugh when thinking about some of the Royals fans believing that Cueto might not be on this roster if he continued to under-perform. The wild card in this group is Yordano Ventura; if he pitches like he has over the last 4-6 weeks then he will be a solid number two. If he reverts back to his form from earlier this year there could be an issue. I also think Medlen could be a major player, which seems a bit inconceivable considering where he was at when the season started(starting the climb back from Tommy John Surgery). This isn’t the most solid group but if they can go 5-6 innings every game in the playoffs, hopefully the bullpen can do the rest.

Speaking of, the bullpen is still a strong suit for this Kansas City team but not quite the monster it was last year. Greg Holland has fallen from grace and it was announced earlier today that Wade Davis is the closer going forward while Holland’s role on the team is to be determined. It also came to light that Holland has been dealing with an elbow issue since the All-Star break and isn’t reliable enough to close games for Kansas City. I’m not shocked to learn Holland was hurt, as I have suspected it most of this year, but this puts a giant question mark into the playoff roster. Can Holland be relied on to perform in any close game, even if that means coming in as early as the 6th inning? Or is he past the point of being trusted in such a situation and be completely left off the roster? I really don’t have an answer to this, but I also know manager Ned Yost is a loyal person and might keep Holland around for that reason only. The other options would be to leave him off while adding Paulo Orlando to the team, trusting that a 7-man bullpen is good enough in the ALDS, or you add young pitcher Miguel Almonte to the pen. Almonte has been a mixed bag so far in September and probably isn’t ready for the big stage, but he does have electric stuff and if used in the proper situation could be a viable option. IF Holland is left off the roster, Orlando very well could be the one given the nod. 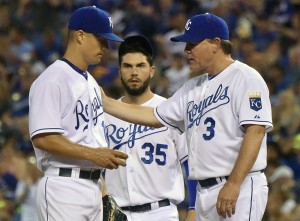 The other roster question for the bullpen is whether to go with Chris Young or Jeremy Guthrie as the long reliever. I know there some Royals fan snickering right now for even mentioning Guthrie, but hear me out. Over the weekend I felt like it could be Guthrie, since he was given the starting nod once Duffy was shuffled to the pen and because Chris Young hasn’t been used much over the last couple months. In fact, in August Young didn’t throw more than an inning in any outing, and only appeared in five games during the entire month. Young does have a 2 and a 3 inning outing so far in September, but I would imagine his arm isn’t stretched out like it normally would be. Plus, I couldn’t imagine Young, an extreme fly ball pitcher, to see any action in Toronto, New York, or even Arlington or Houston’s ballparks. Those ballparks are pretty much all hitter’s parks, or in other words a nightmare for a guy who gives up lots of fly balls. So the only action Young would see would probably be at Kauffman Stadium and that cuts down how often you could use him. But then Guthrie looked atrocious on Tuesday night against Seattle and pretty much assured that he would be left off of any and all playoff rosters. Great guy, but Guthrie has had an awful season that isn’t getting better. So Young gets the nod over Guthrie, but hopefully there won’t be much of a need for him come October. 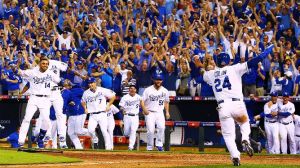 So there you go, my guess as to what the Royals first round playoff roster will look like. Like I said, there could be a few slight changes to this and with a week and a half left in the season there is the possibility someone else could get hurt or there could be a need for a bit more depth in an area I hadn’t thought of. At the end of the day it is great to even be able to have this conversation, no matter how much bickering goes on about which player stays or goes. With September being a rough month, I think I speak for lots of Royals fans by saying “let’s just start the playoffs already”. Trust me, it will be here soon enough, as we get to engulf ourselves in another ‘Blue October’.