Go back to October of last year. The Royals are one out away from wrapping up the ALCS and making their first trip to the World Series since 1985. The Royals have their closer on the hill to finish Baltimore, a job that Greg Holland has done countless times over the previous three seasons. I can’t get the image out of my head, as Mike Moustakas throws the ball over to first baseman Eric Hosmer and the celebration has begun for Kansas City, including Holland and catcher Salvador Perez embracing in-between the mound and home plate. It was simple back then; Holland comes in and closes the door on another Royals win. Despite the fact that it has been less than a year since that happened, it seems miles away from where Holland is at right now. In fact, the question is being asked: Can the Royals afford to keep Holland as their closer as the playoffs loom?

It all started during Spring Training. Scouts talked about how the Royals bullpen arms looked a bit haggard after playing deep into October and more specifically that Greg Holland looked tired. There was some concern back then, but it appeared to be nothing to concern ourselves about once the season started. Early on Holland seemed fine, although his velocity was down a hair. Instead of consistently hitting 96 mph, Holland was only cranking it up to 93 mph with the occasional 94-96 sprinkled in. Then on April 18th, he was placed on the disabled list for a ‘right pectoral strain’. Holland would sit out until May 6, which saw his activation and return to the team.

Despite the fact that Holland was back and swore he was healthy, something didn’t feel right. The numbers showed it as well. Throughout May, Holland was only striking out 7 per 9 while averaging over 8 walks per 9 innings. He was still stranding runners at a proficient rate(over 80% of the time) but it did appear that location was an issue, as was a dip in velocity. In May, this wasn’t a major issue. Holland had missed most of the first month of the season so it was understood it might take a bit to get his legs underneath him. That’s fine, as the Royals were winning and Wade Davis and the rest of the bullpen could pull some of the extra weight.

June, July and August saw his strikeouts go back up to a normal rate and walks would go down to about 4 per 9 innings. Holland has always been a bit of a tightrope walker, so in some ways these months it was par for the course. The only difference was the velocity. What was once a consistent 96 mph for Holland had now become a 93 and sometimes closer to 91. His other pitches seemed to be on par velocity-wise, although his curveball has seen a dip as well. What has always been great about Holland was the fastball was a way to set up the slider, which is normally his “go to” pitch. Problem is that with his fastball velocity now diminishing, it makes the disparity between the two pitches a little bit less. It also appeared during these months that Holland wasn’t comfortable on the mound, as his wind-up and arm slot didn’t seem consistent. My worries from earlier in the year started coming back in August, as it had been awhile since Holland had looked right and I still wasn’t convinced he wasn’t hurt.

Let’s go back to August 13th. The Royals are playing the Angels and are holding the lead as Holland comes in to lock down the game. Twenty nine pitches later and the lead is gone, as Holland had given up 4 runs on 3 hits and 2 walks. It was the first game Holland had pitched in four days and the next day Royals manager Ned Yost talked about how Holland was a pitcher who needed more regular work and the team would try to use him more regularly. A couple of interesting points came out of this. First, here is a comment from pitching coach Dave Eiland about the concerns with Holland:

“Everything hasn’t really fallen into place the way he’s wanted to,” Eiland said. “But he’s fine. I have absolutely zero concerns about him. I mean, there’s things I address with him all the time, just like the other 12 guys I have, that we’ve got to stay on top of. There were some things I saw last night, but I’m not going to publicly say what they are.”

But it wasn’t just the issues that we will not speak of. No, there was also this from Andy McCullough of the Kansas City Star about what rival scouts had seen in Holland during this period:

A survey of rival evaluators revealed a diagnosis that is both simple but troubling. With his fastball velocity reduced, Holland can no longer overpower batters at the plate. He has also struggled to throw strikes with his breaking ball, a reality that is common knowledge among his opponents. So he has become more prone to walks, while hitters can square up his fastball.

It makes sense, as his fastball makes his off-speed pitches more important. But when he isn’t able to get them over for strikes, then Holland has to either fall back on the fastball or keep trying his breaking ball. It is a lose-lose situation. 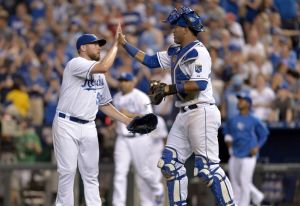 The consistent work, which is what the Royals had claimed was the biggest issue with Holland this year, was not held up like we were told. Holland would pitch about every 2-3 days during August, but near the end of the month Holland had what Yost referred to as a “cranky arm” and had four days between appearances, August 22 to August 27. On the 27th, Holland came into the game in the 9th inning, with the Royals up 5-1. Holland gave up 2 runs in his inning of work and it was what many have said; velocity was down on the fastball and he couldn’t locate the breaking ball. Luckily he was able to get out of the jam and preserve the win for the Royals. The ‘consistent work’ theory does have legs to it as Holland would come in the next night against Tampa Bay and throw up a bunch of goose eggs. In fact, if you look throughout August, if Holland pitched back to back days, or within a day of his last outing he seemed sharper and his pitches had more break. He even had a few outings during this month where the fastball was back up around 95-96 mph. It didn’t stay, but it was there for awhile. When there were longer stretches between outings, Holland not only had lower velocity on the fastball, but his breaking ball couldn’t find the strike zone.

So far in September, Holland has been a ghost. His first game this month wasn’t until September 8th, nine days between appearances. He didn’t give up a hit or a walk, but the velocity was back down again. He would look a little bit better the next night against the Twins, as he would toss another inning in a loss. The Royals have decided within the last month to only bring Holland in whenever the game is close or he has  a save situation, which seems like a recipe for disaster. If consistent work helps him be sharper and gives his pitches more bite, you get him in every few days. Doing this saves you from an outing like Tuesday night in Cleveland. Holland came in to preserve a 2-0 lead against the Indians, Holland’s first appearance in five days. Early on it was obvious he did not have his stellar stuff. In fact, Holland didn’t even have that 91-93 mph fastball he has been using most of this year:

It was as bad as you would think. Luckily, Holland got out of the jam:

And Greg Holland uncorks a 93-mph fastball to end the game. He's doing just enough to keep his job. Dangerous precipice on which to teeter.

Late last week, Mike Petriello of MLB.com looked at Holland’s velocity AND spin rate. Take a look for yourself:

Greg Holland's velocity trend since May 1 is kind of terrifying.. pic.twitter.com/AlEED8PodU

…and Holland's spin rate has gone with it, too. pic.twitter.com/XprvuI0Lrn

Okay, you might be asking “what does spin rate cover and how does that affect a pitcher’s pitches”? Good question! Here’s Petriello from a piece on Holland:

We know that high spin for a fastball correlates with swinging strikes, so that spin rate decline is just as alarming as the velo drop. As you’d expect, the decline we’re seeing has led to fewer missed bats. Through Aug. 14, which is the last peak on those graphs, Holland’s strikeout percentage was 27.3. Since then, it’s down to 20.0 percent.

It also has been noticed that Holland isn’t using that fastball as much as before, instead trying to rely on his slider:

The problem is, his slider has now seen a velocity drop as well, down to 83.18 mph in September(it was in the 85 mph range for most of this year). So even if the 87 mph fastball isn’t the norm going forward, it does appear that Holland is dealing with more than just a “cranky arm”. My theory that he has been hurt most of this year just took a giant leap forward this week.

So where do the Royals go from here? It’s obvious that Holland isn’t as reliable as in years past, but I’m not 100% sure you take him out of the closer’s role. I know that sounds crazy, so hear me out. Wade Davis is the Royals best reliever. I think we can all agree on that. If you are like me, you believe that being “the closer” is just a name for the guy who wraps up the game. I am of the belief that you want your best reliever to pitch in the highest leverage situation, whether that be in the 7th, 8th or 9th inning. With that said, in those situations I want Davis on the mound, not Holland. If that means the 9th inning, so be it. Unfortunately, most managers don’t think that way and we can count Yost among that group. But the coaching staff is aware of Holland’s troubles and it seems they are at least monitoring the situation going forward:

That seems like the team is willing to play with fire, at least until postseason. Come October we could have a different story:

“We’re not going to jeopardize anything once the playoffs starts,” Yost said. “We’re going to make sure (Holland is) 100-percent ready to nail it down. And when you talk to him, he’s like ‘I got this.’”

No pitcher will tell you different(well, maybe Matt Harvey) but it does appear as if the Royals are trying to be loyal to Holland while also acknowledging a move might have to be made. Relievers on average have a short shelf life and closers seem to only stay in that role for a couple years at a time, on average. I am still of the belief that Greg Holland is hurt and while the Royals have tried coaxing him and his arm all throughout this season to get him to the playoffs, at this rate Holland might just be another arm down in the pen come October. Some of us Royals fans have referred to Holland over the years as “Dirty South” due to the filthiness of his pitches and the way they drop out of the strike zone. As of right now, there is nothing filthy or dirty about Holland’s pitching repertoire and that doesn’t seem to be changing. If that is case, I’m not for sure I want to see Holland pitching in October and I hate the thought of that.