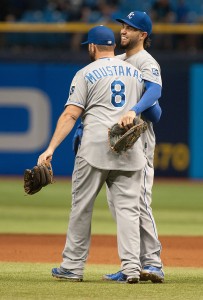 In the old days, you would play all the teams in your designated league the same amount of times. It didn’t matter whether you were a Central division team or an East team, you play each other the same amount of times as the teams within your own division. That was changed a few years ago and teams now play the teams within your division the majority of the time. That means a team like the Kansas City Royals only play the teams in the “other” division twice per year(one at home, one on the road). So this series with the Tampa Bay Rays wrapped up the two teams time together this year, as the Royals won the previous series at Kauffman Stadium. That series saw the Royals sweep Tampa Bay; this one saw the Royals take two of three. This put the Royals at 80 wins with 32 games remaining and leads to a number of varying topics coming out of this series at ‘The Trop’. 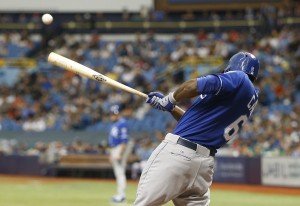 This section felt like it could be a toss-up, with both Kendrys Morales and Mike Moustakas getting heavy consideration. But the more consistent hitter in this series was Lorenzo Cain, who went 3 for 9 with 2 runs, 2 RBI’s, 4 walks and 2 stolen bases. Cain did what he has done for most of this year, which is basically a little bit of everything. I decided to take a deeper look into just how good Cain has been and I have had a hard time finding something that Cain has done worse this year than last. Walk percentage? Up. Strikeout percentage? Down. Slugging and On Base percentage are both up as is his wRC+ and WAR. He is hitting the ball harder and hitting the ball more consistently to all fields than ever before in his career. Literally the only thing that is down from last year is Cain’s BAbip, which is at .357 from last year’s .380. But the argument there can even be made that this is due almost entirely to his increased home run numbers. There has been a lot of discussion about what the Royals will do once Alex Gordon is activated and just how the lineup will shake out. I’m pretty sure that no matter the changes in the batting order, Cain will remain in the third spot, his home for this entire 2015 campaign. It’s even conceivable at this point that Cain will end up in the top five of the voting for the American League MVP race, as he should:

It has been a marquee season for a player who at one time we just worried he wouldn’t be able to stay healthy, let along put up numbers that would put him into consideration for the highest honor in the league. 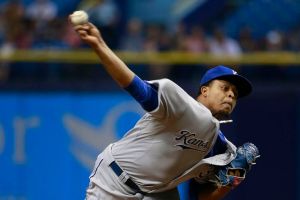 When the season wraps up, I am going to go back and check just how many times Volquez got this honor, since it seems to happen quite frequently. Volquez spun another good game on Friday night, going 6.2 innings, giving up 6 hits and 2 runs(1 earned) while walking 2 and striking out 5. It was another quality start for ‘Easy Eddie’ and gave him a game score of 59. At this point Volquez is probably in line to be the #2 or #3 starter in the rotation in the playoffs and has earned that right this year. I’ve asked the question before ‘which Dayton Moore signing has been more important this offseason, Kendrys Morales or Volquez?’ and as great of an impact as Morales has had on the Royals lineup(and it has been a big impact), I tend to lean toward Volquez. Earlier in the season(before the Johnny Cueto trade), Volquez was the only consistent starter in the rotation as Yordano Ventura, Danny Duffy and Jeremy Guthrie all struggled. Volquez has been the stopper for this rotation, a guy who holds the other team in check and allows his team to win, thwarting off any threats or long losing streaks. Without Volquez being a steady force in the rotation, I’m not sure the Royals sit here right before September with the biggest division lead in the league. Without Volquez, this very well could be a much tighter race that what lingers in front of them.

Sure, the Royals won this series. But most of what has been discussed has been a pivotal play in Sunday’s game that Kansas City lost. The Royals are down in the Top of the 8th inning, 3-2, with runners on 1st and 3rd and 1 out. Morales hits a little chopper down the first base line and then…

On first instinct I felt that was a TOOTBLAN(Thrown Out On The Basepaths Like A Nincompoop) on Morales’ part and one of the worst plays I have seen this year. But the more I watch the play I tend to think even though it is bad, there were a number of issues that should be pointed out. First off, the ball appeared to be foul once James Loney grabbed it. In fact I am assuming that is why Morales didn’t run. There was also no definite call from the home plate umpire, who had the best view of that ball. The first base ump called the ball fair, which I believe is what the home plate ump went off of. I should probably point out here that the play is non-reviewable, which is a bigger conundrum for Kansas City. Saying all that, some blame falls on Morales. He had to have seen the first base umpire call the ball fair, which meant he should have run. Even if he didn’t see it, you should assume it is fair unless otherwise called. I get he thought it was foul and in the postgame manager Ned Yost said “we don’t run out foul balls”. That is fine, except in a scenario like that you run and ask questions later. That major flaw is on Morales as he should have ran no matter what. It looks really bad when a rally is snuffed out while you are just standing at home plate, an easy out for the catcher to make. This might not be a TOOTBLAN at the end of the day, but it is still bad fundamental baseball, which is a shock since the Royals don’t make many fundamental errors. This probably cost the Royals at least a chance of tying up the game and maybe even costing them a victory. Hopefully it is remembered and next time the batter runs to first, foul or not.

It was an exciting three games at Tropicana Field and much more went on than just what is above this line. For more on the Royals and Rays series, read on:

It also appears as if Zobrist will be taking over for Omar Infante once Alex Gordon is activated from the disabled list:

One can only hope that Kansas City has made a great impression on Zobrist and makes his decision this offseason a little bit easier. It would help though if Zobrist doesn’t make any enemies:

Ben Zobrist hasn't bought Rusty Kuntz that leafblower. Rusty picked out the one he wanted, but he's worried it's unmanageable for his wife.

Kendrys Morales: 46 2-out RBI this season, most in MLB

There is also his ability to hit a home run in the catwalk at ‘The Trop’:

You always hear how each stadium has their own set of quirky rules. Wrigley Field has the ivy, Houston has Tal’s Hill(for now), and Tropicana has those catwalks. Luckily the call went Kansas City’s way and Morales came away with a homer. Folks, that stadium is ugly. Let’s hope they get a new one before MLB decides to ship them up to Montreal.

Ryan Madson is dealing with a wicked case of dead arm. He hasn't pitched since Aug. 22, and his right arm is still sore to the touch.

This was to be expected. Madson hadn’t pitched in the big leagues since 2011 and has thrown 51 innings so far this year. Hopefully a little rest will help keep him healthy and available for the playoffs. Now if only the Royals could find a cure for Jeremy Guthrie’s “Longball-itis”.

I often feel like Major League Baseball isn’t always the best at promoting their players and why they are so great. Guthrie might be relegated to long reliever status and might not appear in very many games going forward, but he still managed to have fun and put a smile on that kid’s face. THIS is the stuff you promote about your game. THIS is just one of many examples about what is so great about this game and it’s players.

Moose has also shown that he can be a tough out when he needs to be:

A lot of praise this season will go to Lorenzo Cain and Eric Hosmer, but Mike Moustakas has put together a season he should be proud of. Lets hope he finishes strong and shows that early season surge was not a fluke.

It is "reasonable" to expect Alex Gordon will be recalled next week, Ned Yost says. I bet you see him in KC on Tuesday.

Gordon looks like he didn’t miss a beat while playing in AAA Omaha:

The big question now is where will Gordon bat in the lineup upon his return? The 6th spot where he was hitting earlier in the year is now inhabited by Mike Moustakas, who has been hitting lights out as of late. Honestly, the best idea is to bat him leadoff, sending Alcides Escobar down in the lineup, especially considering his hitting throughout August:

Batting Gordon and Zobrist at the top of the lineup makes the most sense, since those are your two best OBP hitters. If the Royals really want to maximize their offense, placing Gordon near the top of the lineup would be the wisest move. I guess we will find out Tuesday what Ned Yost has in mind when it comes to lineup construction going forward. 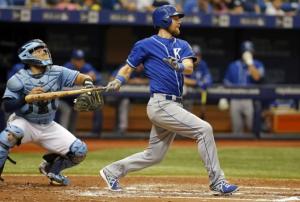 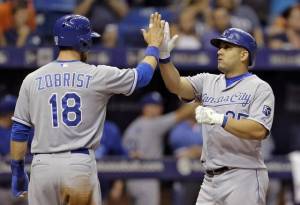 We now venture into the final month of the regular season and the Royals still have a few items to check off their ‘Want List’:

The beginning of that journey begins on Tuesday, as the Tigers stroll into town for three games at ‘The K’, followed by three against the White Sox. Tuesday night’s game could be fun, as Johnny Cueto faces off against Justin Verlander, who will be making his first start since he almost no-hit the Angels. Tuesday should also be fun, as it looks to be the return of Alex Gordon. The Royals are in the driver’s seat as the playoffs loom and it is the pole position we have all yearned to be in this spot for the last 30 years. Buckle up, kiddos; we are getting ready to go on a fantastic ride.