It feels like weeks since I have done a review of a Kansas City Royals series and in some ways it has. Life sure has a way of getting in the way of fun, although there is little joy in Mudville right now. That’s right, the Kansas City Royals are on a downward projectory with only a few weeks left in this regular season and the villagers are freaking out. Well, some of them are. I am not. In fact, I say lets get this losing cycle out of the way. The Royals struggled a bit this past weekend in Baltimore, a series that saw the Orioles take two of three from Kansas City. There was some good, some bad and even the downright ugly. Let’s meander over and see what all this series meant for the Royals of Kansas City.

On the surface, it wasn’t a blow away series for ‘The Man We Call Moose’. But it’s hard not to give this achievement for one lone game when it is one of the best in franchise history. On Saturday, Moustakas went 3 for 5, hitting 2 home runs and driving in 9, which is a new Royals record:

So what is even better about this? How about the fact that this monster achievement could have entirely been the source of a ‘mechanical adjustment’:

Mike Moustakas made a slight mechanical adjustment just before he batted in the sixth. In his next three AB, he drove in nine runs.

Mike Moustakas; first player since 1920 (when RBIs were first officially tracked) to drive in 8 runs after the 5th inning in a game #elias

Here is the 2nd home run, the one that pushed him to 9 RBI’s in the game:

Overall, Moustakas went 4 for 14 in this series, with a total of 11 RBI’s. Over the last month we have gone from Moustakas going back to his pull-happy days of 2014 before reverting back to the Moose we saw earlier this season, that opposite field hitter we call ‘Oppo-Moose’. It has been a crazy season for Moustakas, one that was more of a struggle than any of us knew. Word got out this weekend about his mother passing away last month, as she had been battling cancer over the last couple of years. It has been something Moustakas has been dealing with for awhile now and I’m sure it weighed heavy over the last month. Hopefully Moose can finish the year strong and possibly even reach a plateau, like that 20 home run mark, since he is only two away. 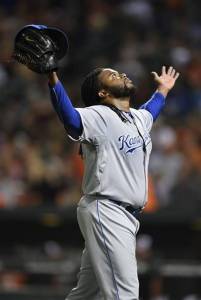 (Most Talked About)Pitching Performance of the Series: Johnny Cueto

The most talked about topic with the Royals nowadays is the performance of Johnny Cueto and why he is struggling so much. It’s pretty obvious that Cueto has hit a bump in the road, which wasn’t helped by his start on Sunday night. Cueto went 6.1 innings, giving up 11 hits and 8 runs(7 earned) while walking 1 and striking out 3. It gets worse when you go back to August 21st, which is five starts ago and when this stretch of confusion sat in for Cueto. In those five starts, Cueto has thrown 26.1 innings, giving up 48 hits and 30 runs(28 earned) while walking 5 and striking out 20. That leaves Cueto with an ERA of 9.57 and opposing hitters have a BAbip of .417. It’s even worse when looking at hitters slash line against him: .390/.411/.675. So what is going on? Oh, there are theories and so far no one theory is the sole answer. The Royals felt like he was tipping his pitches for awhile, or that he wasn’t getting as much movement on his pitches as he normally does:

That was debunked Sunday, as his pitches had good life and there were no noticeable tipping going on. Injured? He says no and has been saying no for weeks. Lost command of his fastball and hung some off-speed pitches? Early on, yes, but not really recently. He has been leaving more pitches up in the strike zone than normal, as normally he would keep the ball down more. There is also this; Rob Neyer recently wrote a piece on Cueto and I found this very telling:

One odd thing about Cueto’s pitching in recent weeks: the range of speeds on his fastball seems to have gotten significantly smaller. Prior to his last seven starts, his fastballs in a game typically ranged from 87 to 96 miles an hour. In his last seven starts, though? Cueto hasn’t thrown a single fastball slower than 91. His two-seam fastball and his change-up are his second and third pitches, and those also have shown less variance lately. Which might suggest that he’s a little too amped up, and is simply overthrowing.

So there is that as well. Funny thing, his strikeout to walk ratio with the Royals is better than when he was with Cincinnati, in fact better than at any other time in his career over a full season. More than anything it appears he has hit a slump where he is leaving the ball up and losing confidence. That has made some of us ask some very poignant questions:

Honest question: At what point does Yordano Ventura start Game 1 of the ALDS, not Cueto? #Royals #ForeverRoyal

My thought? I don't think we are there yet. Not 100%. But if he continues to struggle, he isn't starting Game 1 of the ALDS. #Royals

Some Royals fans have suggested he be left off the playoff roster. That isn’t happening. He still has about 4 starts left this season and after that will determine his fate. At worse he comes out of the pen, or becomes the fourth starter. It would be insane to keep Cueto off the playoff roster considering his status in the league over the last five years. I know I have my concerns, but I’m also not majorly worried…yet. It does appear that a wise sage doesn’t agree with my estimate:

Denny Matthews says he wouldnt give the ball to Johnny Cueto in the playoffs as of now. "You go with whoever is giving you the best outings"

It will be interesting to follow. What we do know is that even if this keeps up, the Cueto trade isn’t the worse in Royals history:

For anyone who says the trade for Cueto is worst in #Royals history, I say this: Ed Hearn for David Cone. Nuff said. #ForeverRoyal 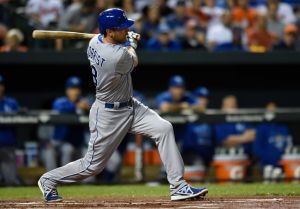 It sure seemed as if Moustakas and Cueto were the only talking points in this series, but they weren’t. A visit to ‘Charm City’ brought some news and notes for these Royals:

The new top of the Royals' lineup will be really difficult for opposing teams to deal with–Gordon, Zobrist both good OBP, + work the count.

I’ve been highly critical of Yost over the years, but since last October it’s almost like he has become a wizard and figured out that logical managing is easier than he thought. I love this move and have zero complaints about it. Good job by Neddy. There. I said it.

Wade Davis says he should be good to go tomorrow. Just tightness in his biceps area. "Big muscle stuff. I should be fine." #Royals

As if that wasn’t enough, Greg Holland’s velocity has fallen and it can’t get up:

Greg Holland's velocity trend since May 1 is kind of terrifying.. pic.twitter.com/AlEED8PodU

…and Holland's spin rate has gone with it, too. pic.twitter.com/XprvuI0Lrn

But there’s more! Looking at the bullpen’s numbers over the last month and they are posting a -0.1 WAR and a 4.71 FIP, both ugly numbers. Strikeout and walk rates aren’t too bad but the ERA is around 3.79 in that span, very human for this stellar pen. It gets worse. Over the last two weeks, they are the worst bullpen in the American League, posting a -0.5 WAR, a 5.91 FIP and an ERA of 6.00. Their strikeout rate in this period is the middle of the pack, but the walk rate is the second highest in the league and their HR/9 is only ahead of the Red Sox. This is alarming since this group has been one of the hallmarks of this team the last few years and what was once a guarantee now seems like a question mark. Hopefully the bullpen ship can be righted before October, otherwise more rocky waters could be on the way. 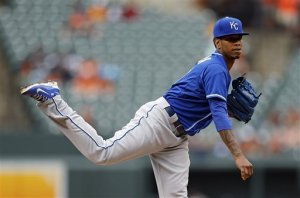 I still find it weird that the #Royals are the top team in the league in September and @BretSabes hasn't tossed a single pitch for them.

Johnny Cueto has as many Ls in 8 starts for KC as he had over 24 starts in 2011 http://t.co/T5WIgkujRS pic.twitter.com/jujQIErFta

16 teams in baseball have hit more batters than the Royals.

45: the number of batters hit by KC pitchers this year. 46: number hit by Baltimore pitchers

This is what happens when you set a franchise record. #ForeverRoyal pic.twitter.com/FdGghPr86Q

Unless something changes right quick, Johnny Cueto is losing himself tens of millions of dollars. He still looks like a mess right now.

That's Johnny Cueto? Why does he keep pitching like Runelvys Hernandez? https://t.co/z6PlxUFWvP

Johnny Cueto has given up four homers in a game for the second time in his career. #Royals

Johnny Cueto insists he is fine physically. And he says he will "answer the bell" in October. #Royals

Ned on if Cueto's struggles will alter his October rotation: “Not right now. But it may if this continues.” #Royals

Only twenty games remain in this 2015 regular season for the Royals as their ‘Magic Number’ sits at 11. I think we can all agree this isn’t how we pictured things wrapping up in September, but Kansas City now has some work to do as time does start to run out. The Royals travel to Cleveland for four games this week, a great chance for this team to get back on track and knock off a few wins so some of the panicky Royals fans can calm down and enjoy the next month. Look at it this way; they can either slump now or slump once the playoffs begin. I will take now. It seemed elementary just a month ago but now it might take a little bit of work. If the Royals are going to clinch soon, they are going to have to do it within the division. Honestly, that’s how this should go down. Step 1, get back to basics. Simple as that.

2 thoughts on “Free As a Bird: Orioles Continue Royals Slide”