There were a lot of things that went wrong last year for the Kansas City Royals, but if you listen to the media you would think that all this team needed was a few top notch starters and things would be good to go. There is not a sane Royals fan out there who couldn’t see that the team needed pitching. BADLY. But something else was a big concern last year, but doesn’t get the press that the pitching has. In fact, it was a concern despite it being considered one of the team’s strengths going into 2012. Just as big of a problem for the Royals last year was the team’s hitting, or at least the lack of runs being scored. Nothing has changed with the lineup going into 2013, but yet we are to believe all is fixed. Shouldn’t we be worried about this as well?

Now, I take back my earlier comment. There is one change for the Royals when it comes to the offense. Kansas City’s hitting coach last year, Kevin Seitzer, was jettisoned at the end of the season and ended up being the fall guy for the club’s lofty goals not being reached. We can debate for days whether or not Seitzer deserved to be fired, but the one thing that can’t be debated is that the offense, while being quite able to get on base, was not so successful on getting them to cross home plate. The stats prove that this team, when they want, can rake. The Royals finished 2012 4th in the American League in Batting Average, and 3rd in hits. They also show that this team wasn’t the best at taking a walk last year, as they were  9th in OBP, and 8th in OPS and total bases. What about runs? Glad you asked. The Royals were 12th in both runs scored and RBI’s in the American League. WOW!! That is a rather large discrepancy between the amount of hits this ballclub had in 2012 and the actual amount of those runners that scored. So exit Seitzer, enter the two-headed dragon of Jack Maloof and Andre David. The two of them will be working with the Royals hitters this year, and are hoping to improve on these shoddy numbers. But more on them in just a bit. 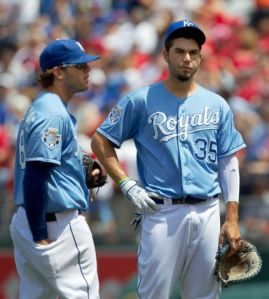 So how do the Royals expect to see improvement on the offense when they will be sporting the same lineup as last year? The big part of the bump is expected to come from bounce back seasons from youngsters Eric Hosmer and Mike Moustakas. It’s been written about a lot, so we don’t need to go into it much here. Both Hos and Moose had less than stellar 2012’s, and you it seems inconceivable that they would continue that downward slide again in 2013. But can we guarantee that these two will be back to normal expectations? There is a good chance of this happening, as both are perceived as natural hitters. So far, Hosmer has looked good this spring(yes, I know. It is only Spring Training. Remember he tore up the Cactus League last year as well.) , and the prevalent thought is that a lot of Moustakas’ problems last year were injury related, as he played most of the second half of the season with a knee issue. If both take a step forward this year, this could easily bump up the team’s offense and help relieve some of worrying there is about the team’s hitting.

Another big change the Royals need this year is some improvement from Right Fielder Jeff Francoeur. Francoeur was bad in 2012. Nope, that’s not the word I am looking for. He sucked. Big time. Francoeur might very well have been the worst player in baseball last year, as he hit a paltry .235, with a .287 OBP and (you might want to sit down on this one) a WAR of -2.7! That from a guy who hit in the 5th slot for much of the season. Francoeur thinks he has figured out part of what led to his hellaciously sucky 2012, and so far this spring he has been hitting at a solid clip. Once again, it is only Spring Training. But for the Royals to be better this year, they need a better year from Frenchy. If we get the same Francoeur we got last year, that Wil Myers trade will look worse and worse by the day. Royals management has faith in ‘The Man they call Frenchy’; I wish I could say the same. Although, at this point a .250 season would be an improvement.

So what else are the Royals counting on to be different offensively in 2012? Well, to be healthy is also on the list. Last year this team lost two regular starters for a chunk of the season, as catcher Salvador Perez didn’t even play in a game until July 2nd, while center fielder Lorenzo Cain got injured in the second series of the season against Oakland, and ended up only playing in 61 games in 2012. The Royals need both healthy if they hope this season will be better for the team offensively.

I don’t know what the team is thinking at Second Base. Last year, it seemed to be a revolving door of Getz-Betancourt-Giavotella-Falu-Abreu, and none really staked their claim. Johnny Giavotella has to show the team that he can hit in the majors, or the job belongs to Chris Getz. Getz hit a homerun this spring(OMG!), so I don’t know if the team thinks he has some pop in his bat now or what. With Getz, I just don’t think the team can expect much from him offensively. Giavotella is a mystery, as he reached the majors due to his bat, yet has not shown that same offensive prowess in the big leagues. Hopefully the Royals can get some offense from the position this year. If not, it will make you wonder why they didn’t go out and try to get someone this past offseason.

So the Royals are counting on a lot of things that didn’t work in 2012 to go right in 2013. But if that wasn’t enough, manager Ned Yost has stressed since Seitzer’s firing that he wants his team to swing for the fences more this year. Now, this team should probably hit more homeruns. The Royals tied for last in this category in the American League with Minnesota in 2012. If anyone has a decent memory, Minnesota plays in a rather large ballpark, even bigger than Kauffman Stadium. The Twins were also way worse than the Royals last year, so it seems a bit odd that a team who was 3rd in hits would have that low of a homerun total. So yes, there is room for improvement. But this team doesn’t strike me as one with homerun hitters. Sure, Billy Butler lead the team with 29 bombs last year, but Billy still strikes me as more of a gap hitter. Same for Alex Gordon and Hosmer. Moustakas to me seems like the only one well suited to be a power hitter. Not that the other guys won’t hit their share, they’re just hitters more suited to be guys who are good hitters rather than try to swing for the fences. This also brings up another point. Why bring in two hitting coaches who were never power hitters back in their day, (and in fact were pretty close to the same kind of hitter Kevin Seitzer was), yet ask them to have the hitters focus on the long ball? It would seem to be a bit of a conflict of interest, as Yost has even said he would rather they strike out then fly out during a plate appearance. Would any hitting coach ever stress to his players that he would rather they strike out then hit the ball? I don’t think so. This just seems like a disaster waiting to happen. Nothing says ‘Rally Killer’ like telling your players to swing for the fences in a crucial situation. 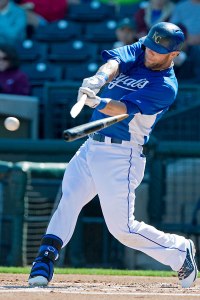 So here we are, just three weeks away from Opening Day, and the Royals so far this spring have tore it up offensively. I can see where people will get excited, thinking this is a sign of what we’ll see once the season starts. But it is not guaranteed, and last year can attest to that. This team could be one of the best offensive clubs in baseball, but at this point I feel even more conflicted on whether we will see that team or the one we saw last year. Having better pitching will help, but it won’t mean as much if the hitters can’t score some runs. There is an old adage that says ‘the definition of insanity is doing the same thing over and over again but expecting different results’. Let’s hope it’s not ‘playing the same lineup from last year and expecting different results’.

One thought on “It’s Not All About the Pitching, Dummies!”