It’s hard sometimes to visit the past. As much as we want to look at the past through rose-colored glasses, most times the truth is that there was just as much bad as good. Go ahead, look back at an old relationship and really dissect what worked and what didn’t. There is a reason you parted ways. This holds true in baseball as well; if a player leaves a team, there is normally a reason. For the most part, Joakim Soria was a positive when it came to his first go-around with the Kansas City Royals. Multiple time All-Star, reliable closer, and even racked some American League Cy Young  and MVP votes back in 2010. Sure, there was the rough patch he had in 2010 when  he was using a cutter way too often(and saw him get hit hard because he hadn’t mastered the pitch), but those five years of glory endeared him to the Royals fanbase. Unfortunately, Soria was part of the losing years in Kansas City, the years that aren’t always looked back on fondly. It wasn’t his fault, but it’s hard not to associate him with that era of losing.

So when the Royals signed Soria to a 3 year deal this past offseason, it was mostly met with cheers and adulation. Soria had put up some good numbers last year during his stint in Pittsburgh and was only entering his age 32 season. But there were reasons to be concerned; I for one wasn’t fond of the length of the deal nor the amount of dollars spent. I wasn’t Anti-Soria, but my feeling was that solid relief pitching could not only be found on the cheap, but younger relief pitching wouldn’t be that hard to find. Instead, the Royals latched themselves to Soria for three years with the hope that he still had some of that old glory left in his arm. In some ways Soria hadn’t changed much; his average velocity is still on par with years past and he still uses his four seam fastball to set up a nasty change-up that is a real worm killer. Soria was known to throw the change-up to generate more swings and misses, as it is slightly firmer than the usual change and has more natural sink to it. The feeling was that Soria could help set-up for closer Wade Davis while also using his past closing experience to help in case of emergency.

The first month of the 2016 season wasn’t a warm welcome back to the fold for Soria. Call it nerves, call it bad pitch location or just bad luck, but in his first outing back he would only throw 2/3 of an inning, allowing 3 hits, 3 runs and 2 walks. In fact, just chalk up April as a bad month; 12 games, 11 innings pitched while giving up 8 runs and posting an ERA of 5.73. Many a Royals fan was already wanting him to be pushed back to less intensive work, a few even wanting him to only pitch during blow outs or in mop up duty. But the truth was that Soria just wasn’t pitching as bad as it appeared; his line-drive rate was down and his hard hit rate also leaned downward. This told me that hitters were just not hitting the ball very hard off of him. This was even more evident when looking at his BAbip, which stood at .355. Luckily, things would turn around starting in May.

May would lead to more prosperity for Soria; 12 games, 13 innings thrown only allowing 2 runs and posting an ERA of 1.35 while his BAbip lowered to .222. In fact, since May Soria has been one of the most reliable Royals relievers. Over his last 22 appearances, Soria has given up only 5 runs over 24 innings, putting up an ERA of 1.88 while almost striking out a batter per inning(striking out 21 over those 24 innings). So what has changed?

For one, it appears his velocity has gone up. There is a slight decrease in the speed of his change-up, but to me that is actually a good thing, as it puts more distance between his fastball and his off-speed stuff. This is a good sign.

It also looks as if left-handed hitters have hard a harder time hitting him, as the release speed has changed by a decent amount from the beginning of the season.Right-handed hitters speed has gone up, but not by very much. This is also shown in the percentage of pitches:

So what is Soria doing differently from April? He has drastically increased the use of his off-speed pitches: 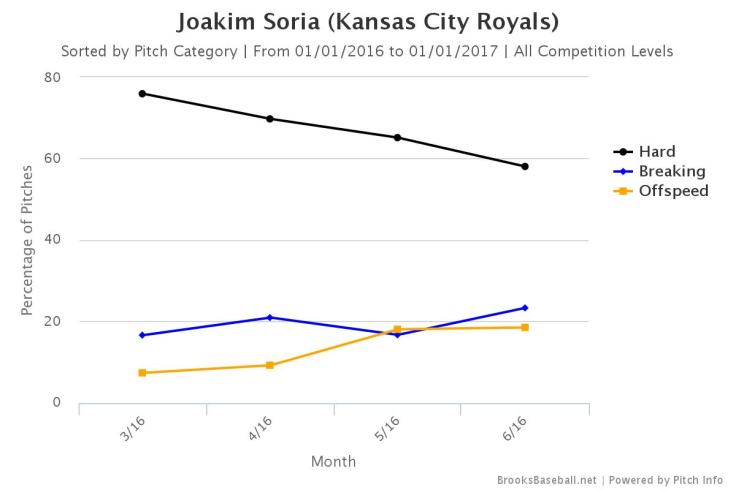 If you notice, the percentage of hard stuff has been drastically reduced by Soria, while both his breaking balls and off-speed pitches have seen an increase since April. This change in philosophy can also be seen in the pitches that batters are swinging at:

It goes to show how a slight change in philosophy can change everything. Batters are hitting better against Soria’s hard stuff, but they aren’t seeing those pitches nearly as much as early in the season. As has always been the case for him, he is using his fastball to set up his off-speed stuff, and because of that the results are looking more and more like they did back in his heyday.

I’m not sure who to give credit to for the change in Soria’s pitch usage(my gut thinking is it was probably pitching coach Dave Eiland) but whomever it was should get a raise. Normally players at Soria’s age start to see a regression; less foot or bat speed, or a decrease in velocity for pitchers. Thankfully for Soria, he seems to have skirted the enivitable…for now.  There is no way to tell if we will be able to say the same by the end of his contract, but for now he is a main cog in the Kansas City bullpen. Players come and go for your favorite baseball team and a select few hold a special spot in your memory. Normally, if a player returns it is at the tail end of his career and he is but a shell of his former self. Thankfully, we are still seeing top shelf Joakim Soria. Sometimes you can go home again.

One thought on “Welcome To The Jungle”