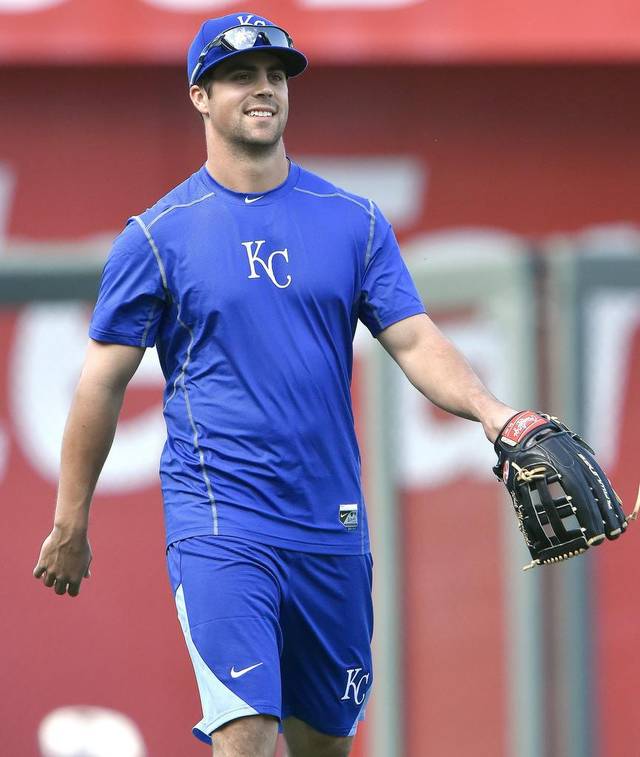 Baseball might just be the best sport when it comes to stories that grab us and give us the belief that if you try hard enough anything can happen. You’ve heard the stories before; the player who toils in the minors for years on end before finally getting their shot at the ‘Big Show'(not the wrestler; that is a whole other article) while producing at such a high level that was never thought possible. Many Kansas City Royals fans remember Mike Aviles, who stormed on the scene in 2008 and ended up finishing 4th that year in the American League Rookie of the Year vote. Aviles has never quite reached those same heights since then, but he has turned it into a successful baseball career as a backup utility player. Eight years later, it looks like Whit Merrifield is looking to improve on what Aviles did all those years ago.

This is not only a great feel good story, but I could almost say I foreshadowed part of this with my article about Whit during Spring Training. The funny part is during the spring, Whit was mainly just thought of as a backup, someone who could fill in anywhere on the field and would be used as more of an insurance piece than an actual part of the lineup. There was a belief by some that Whit had earned a spot on the roster when the team broke camp, but unfortunately he was sent back to Omaha to start the year in AAA. Luckily, there is always a need for a guy who can play 3/4 of the position’s on the field and Merrifield got the call to the majors on May 18th. The initial thought was that Whit would be a backup infielder mostly, as he took the roster spot of infielder Christian Colon. But the stars must have been aligned for Merrifield, as four days later Alex Gordon and Mike Moustakas collided in foul territory during a game against the White Sox, eventually leading to both being placed on the disabled list. Between the Royals injuries piling up and Omar Infante’s disappearing act(62 OPS+ so far this year, which is actually an improvement over 2015) led to more playing time for Whit. Boy, has he taken advantage of it! 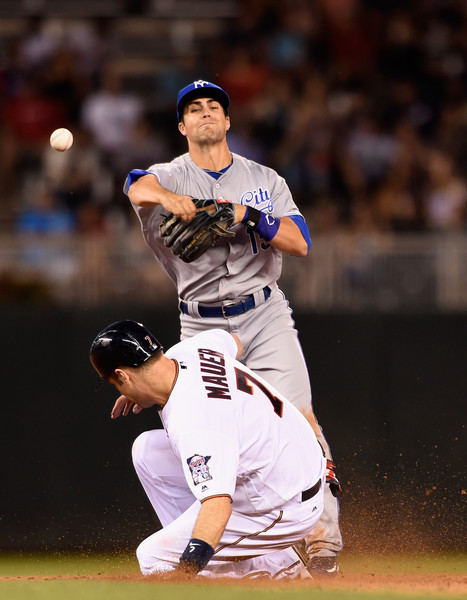 So far in 22 games, Merrifield has played second base, third base and left field, with manager Ned Yost saying recently that he would see the majority of his time at second base, unofficially supplanting Infante from the starting job. The solid defense at second isn’t a big shocker(the most errors in one season at 2B in the minors has been 5, if you are into that sort of thing. He also has 3 defensive runs saved already for Kansas City) but the bat has been a bit of a surprise. So far this year he is hitting .330/.344/.484with a wRC+(weighted runs created, basically accumulating all offensive production and is park adjusted) of 123 and 0.8 fWAR. I think we all tend to think that some of this is sustainable and some of it will regulate itself. But which stats should we believe in when it comes to Merrifield, and which should we hold off on?

Let’s start with the average and on base percentage. I think both of those should still hold up fairly well, although I can’t imagine Whit would hit in the .330 range all year long. If you look at his line during his seven seasons in the minors, he hit .274/.334/.399. The batting average and on base are very respectable numbers and I would tend to lean toward those being about what Kansas City should expect from him. The slugging percentage is down from what he is producing right now, but Whit has never been known for his power numbers. Merrifield has only hit 40 career minor league homers, which is slightly less than 6 a season if you average it out. But while he probably won’t give you many long balls, he might just rack up a nice amount of doubles. Whit has hit 161 career doubles during his time in the minors, averaging about 23 a year. But only going back to 2014, he put together a 41 double season, which is very impressive. Kauffman Stadium could elevate his amount of doubles hit, if he is able to take advantage of the gaps in the huge outfield at ‘The K’.

Merrifield also currently has a .412 batting average on balls in play. This just seems highly implausible to sustain, as there would have to be a certain amount of luck involved. This could also change if he starts making more contact, although an 84% contact rate isn’t too bad. The 19 strikeouts worries me a bit, since that almost equals one per game, but the more time he spends in the majors the more likely he is to lower that, especially if Dale Sveum gets ahold of him. You can also chalk up 3 stolen bases so far, which I like. I can see many a hit and run used when Whit is on base and he actually does have decent speed(just for note, he did pile on 32 stolen bases last year during his time in Omaha). Whit has looked like a good fit at the top of the Royals lineup, giving them a guy who can get on base and also supply some speed to go with it. 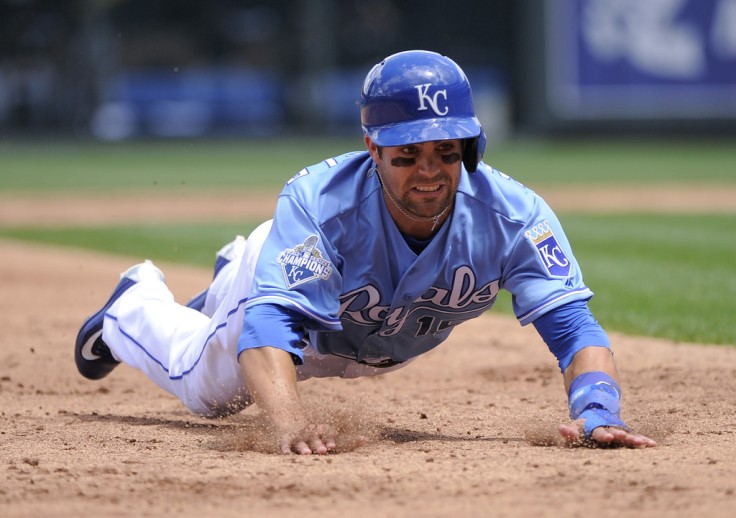 One more item I want to look at with Whit; exit velocity. Merrifield started out hot for the Royals upon his promotion and they also seemed to catch him at a good time, as he was smoking the ball early on: 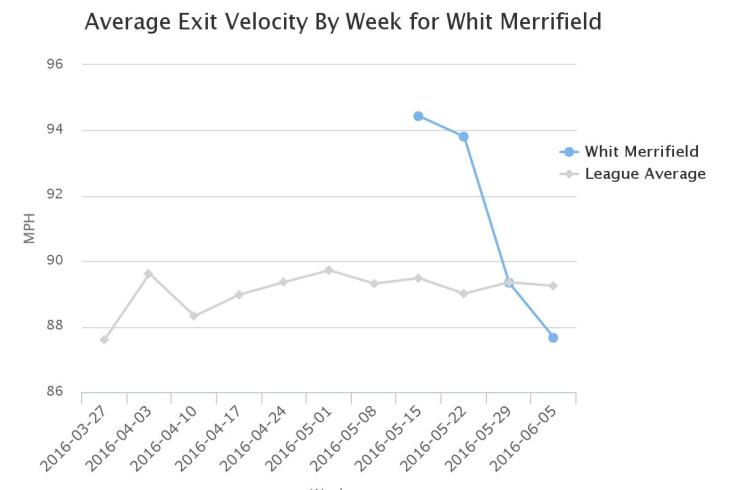 It’s obvious to see the drop, falling from above the 94 MPH line to below league average this past week. I tend to think he would average himself out, where on average his exit velocity would be sitting in 90-92 MPH range. Merrifield has a very nice, compact swing with very little movement which I think helps him make solid contact on a regular basis. This will be something to follow over the next few weeks, as he continues to see regular playing time and gets more comfortable at the big league level.

The comparisons have been flying when it comes to Merrifield and most of them feel fairly accurate. I’ve seen the Willie Bloomquist comp, which I tend to think might be the closest comparison you can make with Whit. Ryan Lefebvre mentioned over the weekend that at the plate he looked a lot like former Rangers infielder Michael Young, and I totally see that when he is batting. I’ve often referred to him as a “Poor Man’s Ben Zobrist”, mainly for his ability to play all over the diamond but apparently I wasn’t too far off; when he was scouted back in college, scouts wrote Zobrist’s name in the report as a similar player. No matter the comparison, what you can say for a fact is that Merrifield has looked like a million bucks so far in Kansas City and it’s hard not to root for the guy who made his big league debut at 27 years old. Logic tells us that there will be a regression on Whit’s part but it’s hard not to think ‘what if?’ when it comes to him keeping up this pace. Even if Whit ends up being the next Mike Aviles or has a career like Willie Bloomquist, is that such a bad thing? Both have ended up with long careers and have contributed as steady backups. But that is possibly the worst case scenario. The best case scenario is that Merrifield becomes a super utility starter that floats around for the team wherever is needed. Either scenario is a respectable one for a guy who has fought hard to get to this point. It has taken Merrifield seven years to get to the majors and by the way he is playing he doesn’t want to go back anytime soon. He might not be the ‘Royals Offensive Savior’ that he is playing like now but he is a guy who should be able to hold down a major league roster spot. Now doesn’t seem like the right time to bet against Whit Merrifield. All he will do is prove everyone wrong.