I love the Winter Meetings. I have since I was a kid. There is nothing quite like the insanity of four days of trades, signings and now rumors of where a number of baseball players could be inhabiting for the upcoming season. All has been quiet on the Kansas City Royals front(well, except for a few minor moves) but it was inevitable it wouldn’t stay that way forever. So when news broke Monday morning that a few moves were very close, I figured it was time to take a peak at the two new-old signings. 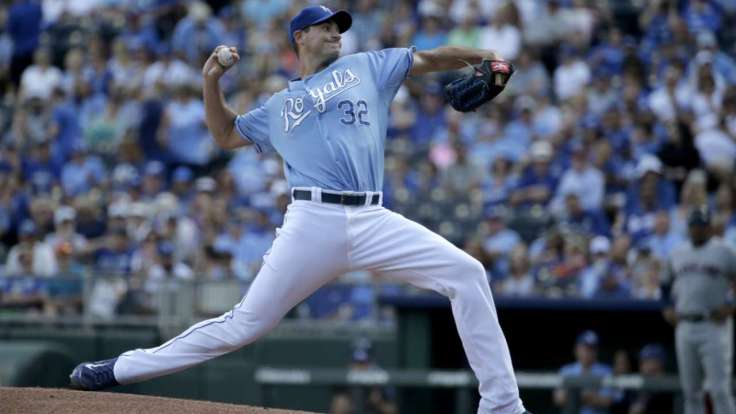 The first was the re-signing of right handed starter Chris Young. Young was a great signing this past year for Royals GM Dayton Moore, as he would take a flyer on the 6′ 10″ righty during Spring Training. Most of us felt like Young would be a solid pick-up, if for no reason other than the fact that he is a notorious flyball pitcher, which works well in Kauffman Stadium. Young was even better than advertised, starting 18 games while throwing out of the pen for 16 more, with a 3.06 ERA over 123 innings, an ERA+ of 135 and an FIP of 4.52. His GB/FB rate was on pace with what he has done over his career and was solid in whatever role manager Ned Yost had for him.That flexibility turned out to be a Godsend for Kansas City, as Young excelled in every role he was given, but none bigger than Game 1 of the World Series. The Royals needed someone to come out of the pen, and despite the fact that Young was the expected starter for Game 4, was called upon to eat some innings that night. All he did was pitch 3 no-hit innings, walking 1 and striking out 4. He was just what the Royals needed and ended up getting the victory after Eric Hosmer’s sacrifice fly in the bottom of the 14th.

The Royals inked Young to a new 2 year, $11.5 million deal(with a 3rd year as a mutual option; yes, Dayton loves his mutual options!) with the deal paying Young $4.25 million in 2016 and 5.75 million in 2017. Young can also earn bonuses based on games on the roster, which sounds like a sweet deal for someone as consistent as Young. Considering what all Young did for Kansas City this year, it’s not hard to see why the Royals wanted to bring him back:

“Chris Young is special,” Moore said from his suite in the Gaylord Opryland Resort and Convention Center. “He’s an unbelievable competitor. You can make the case that he’s the MVP of our pitching staff. And we’re very proud that he’s returning to Kansas City.”

I really like this signing, as Young can fill multiple roles for this team and is a great competitor. Part of what makes Young so great is the fact that he doesn’t have to worry about  a loss of  velocity, as he already doesn’t throw very hard and works more on location and deception than anything else. It appears Young will start the year in the rotation, so it will be interesting to see if the Royals go after another starter, as a name like Scott Kazmir has been mentioned so far as a possible acquisition.

The other signing for Kansas City was the return of former All-Star closer Joakim Soria. Now, this deal hasn’t been 100% finalized yet(Soria still has to take his physical) but the word is that Soria would come in on a 3 year, $25 million dollar contract(with a fourth year mutual option). There apparently is some language in the deal they are working on where Soria would have incentives for starting; I wouldn’t look too deep into that, as it seems like a moot point. In other words, he won’t be starting unless the rest of the rotation falls victim to chicken pox(oh, wait…). One positive for Kansas City is the fact that most of the Royals management is familiar with Soria and know what he is capable of performing for the team out of the bullpen. In fact, manager Ned Yost sounds as if he is anxiously awaiting Soria’s return to Kansas City:

“Just loved his professionalism,” manager Ned Yost said. “Loved his makeup and his composure. Loved his ability to field his position, control the running game, execute pitches. A lot like Chris Young. He’s just a professional performer when he steps on the mound and still very, very productive. Would love to have him.”

Last year Soria split time between Detroit and Pittsburgh and performed admirably in whatever role was chosen for him. It appears at this point that he will be a setup guy for Wade Davis, so I can easily see him pitching the 8th while sliding Kelvin Herrera back to the 7th inning. Soria’s numbers looked good last year, accumulating an 2.53 ERA over 67.2 innings, with an ERA+ of 156 and an FIP of 3.71. Soria also had 24 saves(if you like that sort of thing) in 2015, the most he has had in a season since his days in Kansas City. The most impressive number from Soria this past season was an increased velocity out of his fastball. In 2015 he had an average fastball speed of 92.1 mph, his highest average speed throughout his entire career. It would appear on the surface as if his arm is fine and possibly in the best shape it has been in years.

But I have my concerns. Soria has had two Tommy John surgeries so there will always be a concern that another arm injury could finish him off. Also, it will be hard to insure Soria because of those surgeries, which doesn’t seem like a big deal but if you look at a situation like Jason Vargas, where the Royals will get most of his 2016 contract covered if he sits out the entire year,  you could see the importance of being able to insure a pitcher’s arm. There has long been talk about how the Royals waited too long to try and deal Soria, and then lost him for his final Kansas City season to that 2nd Tommy John surgery. But his health isn’t the only problem I have with the Soria signing.

The other aspect of this signing I have issue with is the size of the contract, both dollars and years. For one, averaging over $8 million a year(and knowing Dayton the deal will be smaller for the first year and gradually increase) just seems like too much for any reliever to me, unless you are Mariano Rivera or Dan Quisenberry. I know it is what the market is dictating right now, but I don’t agree with it. Finding hard throwing arms to fill your bullpen is fairly easy at this point and also fairly cheap. So to spend that money on a setup guy just seems almost comical. Throw in that the deal is 3 years and it goes from bad to worse. No offense to Joakim; I love the guy and I’m already looking forward to hearing ‘Welcome to the Jungle’ blare when he comes into a game at Kauffman Stadium. But for a guy with his injury history and where he is at in his career, 3 years just feels like too much. Once again, I feel the Royals could have gotten a solid reliever cheaper and probably even younger and they could have done the same job Soria will do for Kansas City. I’m glad Soria is returning to where he started, but sometimes that same magic doesn’t return just because you do.

But the best returning news came Monday afternoon thanks to an interview with skipper Ned Yost:

Ned says Rusty Kuntz will be back as 1B coach #Royals

Seriously, best. news. ever. Sure, part of it is the glorious hair that Kuntz rocks. I’m sure even part of it is his name that people still butcher. But the main part is that Kuntz is a big part of that Royals coaching staff. He is the one who works with shifting the outfielders and moving them around based on which hitter is at the plate. He also works with the team on baserunning and was a big part of a big play in the ALCS against Toronto, as he picked up on something David Price had been doing and took advantage of it. Kuntz is a vital part of the Royals success and I’m glad they convinced him to return for at least one more year. Watch out ladies, the ‘Kuntz is Loose’! 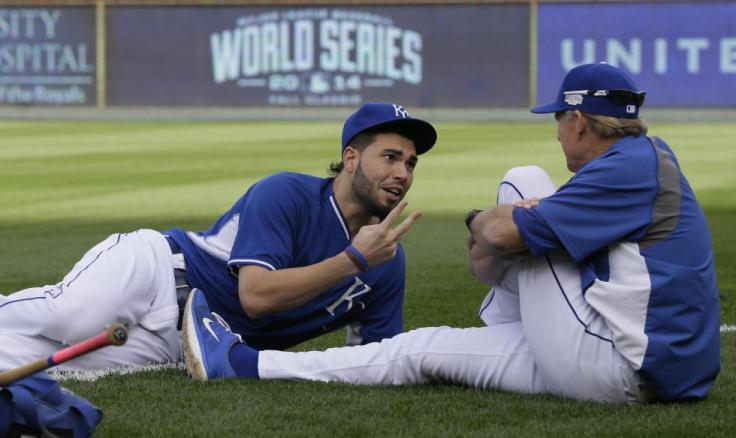 …and so goes day one of the Winter Meetings! There are still a few days left, so plenty of time for Dayton Moore to continue his holiday shopping for the Royals. It will be interesting to see if a couple of the main outfielders on the market start to sign if the other dominoes(ie. Alex Gordon) fall after that happens. All that can be said at this point is the dull period of the offseason is probably over; time to turn the ‘Hot Stove’ up to 11!