I’ve said for years that one of my goals has always been to see all of the major league baseball stadiums before I die. Originally I figured I would do most of the traveling when I was older and had the time. But a few years back I decided that there was no reason I couldn’t visit a different stadium every summer and start working on the list. I’ve also had a baseball bucket list for years, places that are baseball related that I would love to visit. So when we started planning our vacation for this summer, Minnesota was the obvious choice. I have a friend that lives in St. Paul that I have known since elementary school and we had long discussed me coming up to visit and take in a game. Once we locked in Minnesota as the sight, we then started seeing where else we could stop and visit along the way there and back. That is how my baseball vacation began. 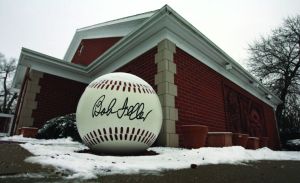 Our first stop was on the drive up, as we stopped in Van Meter, Iowa for the Bob Feller Museum. For those that don’t know, Feller was a Hall of Fame pitcher who grew up in Van Meter and is considered one of the greatest pitchers of all time. With a fastball that was in triple digits even in high school, Feller made his major league debut at the age of 17 and would go on to pitch 18 seasons in the big leagues for the Cleveland Indians, with him losing four years to serve his country in World War II. The museum is not huge but impressive nonetheless. There are artifacts from his playing career and also a few from his military career. The museum spans his career, from a few highlights in high school to his major league career, there is a bit of everything in the museum and lots to learn about Feller. What is really impressive is the amount of former big leaguers that have visited the museum. There is a wall of photos of all the different baseball visitors and it’s great to know that many would come out to this little town in Iowa just to check out baseball history. For the die hard baseball fan, this should be a must visit. If you are a  casual baseball fan, it’s not a bad idea to visit it and learn a few things about the one of the greatest pitchers in baseball history.

We made our way to St. Paul and went sight-seeing on Saturday. That night we headed to Target Field to take in the Twins-Rays game. The little boy in me was really excited to say the least. I fondly remember the 1987 and 1991 Minnesota teams that went to the World Series and Kirby Puckett was one of my favorites growing up. The park is beautiful and seeing the skyline of downtown Minneapolis behind the stadium is a great visual. The game wasn’t too memorable, as Tampa Bay’s David Price was showcasing his talents for contending teams and shut down the Twins in his 8 innings of work. The Twins tried making a comeback in the 9th but it was not meant to be and the Rays came out with the victory. Target Field is a visually nice park but talking around and you get the feeling that as much as the Metrodome was a bit of a dump, it had more character and atmosphere than this new ballpark has.  Either way just getting to visit the park and do that with friends made for a great experience and I’m sure another visit will happen in the future.

We headed back on Sunday and decided to take the long way back, stopping in Dyersville, Iowa to visit the ‘Field of Dreams’ movie site. Like most baseball fans, I have long loved the movie and the idea of a baseball field built out of a corn field just makes it better. We had checked before we left on our trip and saw that Sunday they would have ‘ghosts’ come out of the corn and play some baseball, so it seemed obvious to make sure we showed up for that. It didn’t disappoint, as they let a bunch of the kids visiting to hit and run the bases. The players joked around during most of this, which gave me a Harlem Globetrotters vibe.

It was a fun experience and it is as beautiful as you can imagine. You can basically walk around wherever you want(except around the house) and just take everything in. It is great to take your family to and once the ghosts were done playing you could go on the field and play catch. I will be returning to visit at some point, as I will have to take my son so we can play catch on the field. It is Iowa for sure, but it also felt close enough to heaven. 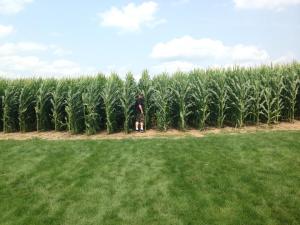 Overall, it was a fun trip with a lot of baseball involved.  I was able to cross off a few items off the bucket list, visit with friends and get to see a lot of beautiful scenery. It was a long trip and quite a bit of time was spent in a car, but it totally worth it. The fact I was able to cross items of my bucket list and spend time with friends while doing it made it one of my favorite trips. I can only hope next year is as much fun. Watch out, Colorado!

2 thoughts on “Baseball Vacations are the Best Vacations”