There probably isn’t a more polarizing player on the Royals roster right now than Designated Hitter Billy Butler. The once beloved Butler has seemingly fallen from grace in the eyes of the fans and even in management’s eyes. Within the last few days word has leaked out that the Seattle Mariners have discussed the availability of Butler, a player they have coveted for awhile now. Butler is enduring the worst year of his career and it appears that at the age of 28 he might have started regressing already. So with all of this out there, the question needs to be asked: should the Royals trade Billy Butler? 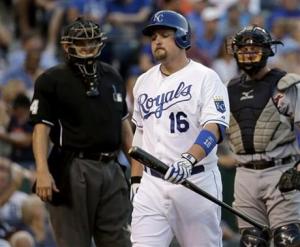 That question is an interesting one, one that isn’t a straight yes or no answer. Let’s first look at the facts: Butler has provided very little offensive punch this season, as he is on pace for the lowest homerun, RBI, and OPS numbers of his career. Since Butler has been one of the most consistent hitters in baseball for quite awhile the prevalent thought(mine included) has been that at some point he would turn around this season and put up numbers more representative of his career. With only 68 games remaining, the likelihood of that happening lessens everyday. His trade value has never been lower and with him carrying a team option(a hefty one at that; 12.5 million) for 2015, it’s pretty plain to see he won’t be in Royal blue next season. The smart choice would be to get something(anything) for him, but it’s not as easy as that. The Royals don’t have a ready replacement for him(Raul Ibanez?? Suuuuuure) and they are pushing for their first playoff appearance in Kansas City since 1985, so the Royals need all the fire power they can get. Since you probably wouldn’t get a better hitter for Butler, trading for his replacement would have to almost certainly be done separately. There is also this little dilemma; if you trade Billy to the Mariners, you are trading him to the team that is in front of them for the second Wild Card spot. So in effect, the Royals might very well be helping out the team they will be fighting for said playoff spot.

So if Kansas City decides to pull the trigger on this trade with Seattle, they are probably either going to ask for a bullpen arm in return, either from the majors or minors. The Royals are probably also going to have to pay a portion of Butler’s remaining salary this year(8 million). The Royals have been searching for additional bullpen help, so this would help solve that. I wish I could say here that Billy would net more than that, but his value just isn’t that high. Mariners DH’s have hit a weak .236/.289/.356 this season, which means for them Butler would be an upgrade. I can’t foresee any other team being interested unless they wanted to use him as a part-time player or a bench guy(especially if a National League team was interested). Seattle is probably the best option for Kansas City to make a deal with at this point. 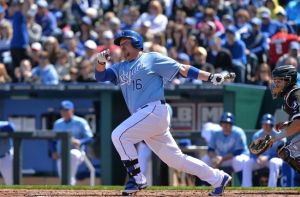 If this happens, the Royals will then need to go out and pick up someone to be his replacement. There have been rumors that the Royals are interested in Jonny Gomes of Boston, who is a solid OF/DH type, but is better when facing southpaws(.306/.403/.429) than righties. Gomes would be a solid batter but one who’s flaws are more apparent when receiving more playing time. Cody Ross in Arizona could also be an interesting addition and he has helped teams make a push for a playoff spot in the past(San Francisco immediately coming to mind). Hell, the Royals might even add a couple bats and split them between RF and DH. There is also the option of the Royals using the DH as a rotating spot, letting their other starters play there occasionally to give them a rest on defense while keeping their bat in the lineup(see Perez, Salvador). The only problem with that is that their bench is weak to say the least and the lineup would see a decline playing Christian Colon, Brett Hayes or Danny Valencia more than they are now. Raul Ibanez? Like I said before this really isn’t an option. The man is 42 and was released by the Angels for a reason earlier this season. In the ten games since his return to Kansas City he is hitting a meek .135 with just 5 hits in 37 at bats. So if the Royals are looking to improve their offense by trading Butler, a couple other moves will probably have to happen as well.

So what should the Royals do? In my opinion, the Royals have a legitimate chance of getting into the playoffs this year, but only if there is an upgrade in the offense. I’ve long been a supporter of Butler, if for no other reason than the fact that he had a consistent track record of producing for the Royals. Unfortunately, he just isn’t producing this year and the Royals aren’t in a position of just letting him fight through it all year. So would I trade Butler? Yes, but ONLY IF IT IMPROVES THE OFFENSE. I put that in bold, because the team shouldn’t just trade him to trade him. No, they need to be confident that if they deal him what they have to replace his bat will be of greater value than what Billy would have brought them for the rest of the year. Otherwise you are weakening an already bi-polar offense that has two players(Eric Hosmer and Mike Moustakas) who the team doesn’t know if they can trust to be solid offensive contributors. It’s sad to say, but it might be the best for both the Royals and  Billy to part ways. In two years Butler has gone from being willing to run through a brick wall for the team and its fans to “favoriting” a post about the trade rumors between Seattle and Kansas City on Twitter:

This is real life, by the way. pic.twitter.com/6aw6MHNMm3

At this point, the Royals need an answer offensively. It appears more and more everyday Billy Butler isn’t that answer. Soon enough we will know if “Country Breakfast” is helping the Royals or the Mariners make a playoff push.