Hey, have you heard the trade deadline is this week? If you have, you know that the Kansas City Royals have been connected to many a rumor, as they fly around like texts from Billy Butler this time of year. This is just a smattering of names rumored to have Dayton Moore’s interest right now: Alex Rios, Marlon Byrd, Antonia Bastardo, Chris Denorfia, Andrew Miller, Jonny Gomes, Dayan Viciedo, Ben Zobrist, and even a hint of Ryan Howard(although I don’t think there is must interest on KC’s part as much as Philadelphia wanting to dump him on someone). It’s apparent the Royals are going to have to pick up another bat if they are serious about contending for a playoff spot. If they aren’t serious(and seriously, what team will really admit that?) then they need to be sellers. But the reports that are leaking out make one wonder if much of anything is going to happen.

Let’s begin with the trade that went down today. Earlier, the Royals traded Danny Valencia to the Toronto Blue Jays in exchange for two players who have been playing in AAA, Erik Kratz and Liam Hendriks. By no means is this a “blow the doors off the barn” type of trade, but it does upgrade a few minor things for Kansas City. Kratz will take over the backup catcher spot for Brett Hayes(who was Designated for Assignment to make room for him) and will add a bit more offense to that spot. The move also allows the Royals to carry a backup infielder again, as Christian Colon will be recalled from Omaha. Yep, the Royals have been playing without a true backup infielder for a few weeks now. To make matters worse, it’s not the first time that has happened this year. Roster management isn’t exactly Dayton’s strength. The move also shows that the team has faith that Mike Moustakas has gotten past his struggles of earlier this year(and last year). I’m not 100% convinced Moustakas will ever be anything more than a guy who hits .250, slams around 20 homeruns and plays good defense. But that is another topic for another time. If anything, this move tightens up the bench, which is a must for any team who wants to go deep into the playoffs. Or is this a precursor to a bigger move? 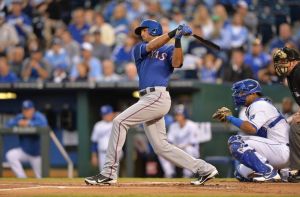 Unless this is all just a major smokescreen, it looks like there might not be a bigger move. Alex Rios of Texas was discussed for quite awhile; it now looks like his salary is an issue and would hold Kansas City back from acquiring him. Marlon Byrd? He looks like a no-go as well, as he has a no-trade clause and won’t waive it unless the team acquiring him picks up his 2016 option. The Royals are pretty set on acquiring a right handed bat(which I feel is a bit short-sighted; if there is a quality bat out there, you go after it, no matter what side of the plate it is) and the options are limited. The scary part is up in the article talking about the Royals bowing out of the Rios talks. It’s been mentioned a few times that salary is a key factor in a move not being made, as in “the Royals don’t want to take on more salary so they will hold off on a deal until August.” This blows my mind. We’ve heard for years by management that “2014 is the season” and “we are all in”. If that was true, you pick up the extra month of salary and give your team the best option of winning. It seems odd that money is now the issue, since Royals owner David Glass has stated he is “obsessed with winning”. If you are obsessed with it, you go all out to make it happen. You are not obsessed with it if you have a limit. This also opens up the other issue; even if the purse strings were opened, is this team a “real” contender? 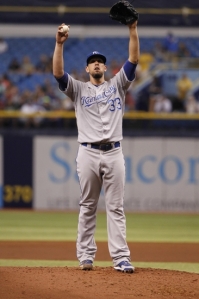 As of this writing, the Royals are 5 games behind the Tigers in the American League Central standings and only 2 games out of the second wild card spot. Technically, they are contenders. But…that second wild card is a bit of an illusion. Sure, it is a reachable goal. But is it worth it to trade off part of your future(a prospect) for a few months of mild improvement(a right handed bat)? I am about as torn on this as I humanly could be. On one hand, the Royals haven’t been to the playoffs in 29 years. We are all dying to get there and there might not be a better chance for a few years. On the other hand, this team just doesn’t scream playoff contender  to me, and hasn’t most of the year. This is a wildly inconsistent offensive team and I doubt even acquiring any of the names mentioned earlier will stabilize this bunch. So with that said, is it worth it for this team to go out, pick up players, get the second wild card spot, play one playoff game on the road, lose, then turn around and lose James Shields and Billy Butler at the end of the season? That is the million dollar question. 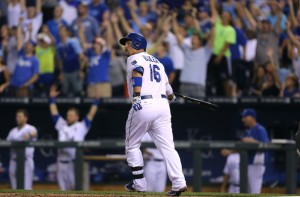 I’m not trying to be a downer, but the realist in me knows we wouldn’t be having this conversation if that second wild card didn’t exist. If the old playoff system was intact, the Royals would be sellers, pick up a nice haul for Shields and start preparing for 2015. Unofficially, that second wild card is a version of beer goggles to some teams that would normally be sellers. That is why there isn’t much out there talent-wise and why a team like Tampa Bay, who once was in the cellar in the American League East, now believes they can get to the playoffs(they are currently only 4 games out of the wild card) and probably won’t be trading David Price or anyone else for that matter. But…that second wild card DOES exist and teams who normally wouldn’t be in play ARE in play. This includes the Royals and is why as much as part of me would like to see what they could get for Big Game James, I know they have to go for it.

But are they? It doesn’t feel like they are. My dad would say they are “half-assing” it. What team, especially one with the offensive holes this Royals team have, thinks that the likes of Raul Ibanez, Erik Kratz, and Jason Frasor shows that they are “all in”? I’m not saying go out and kill the farm system to make this team better, but this team needs more than a 42 year old outfielder, a backup catcher, and a middle reliever to get them to “the promised land”. I have to believe this team will take a step back in 2015, so if they are going for it they can’t just wait until August to make a move, when players have to slip through waivers just to make something happen. No, the time to go for the kill is now(actually the real perfect time would have been when they were still in first place) and instead it feels like no matter what move is made, it will feel like a letdown.

After 8+ years of the current Royals regime, it feels wrong that a simple thing like a few $100,000 will be the difference between an upgrade and the status quo. Sure, it’s not my money, but winning means more butts in the seats at “The K” and more filled seats mean more dollars. It’s a simple equation that ownership refuses to learn and in the long run it will cost them. For some, the Royals hovering around .500 is good enough for them and will satisfy their needs. But for some of us, we want more. We want what we had in the 70’s and 80’s. We want consistent winning, consistent contending and management that “gets it”. Instead, we get a GM who values the wrong things and an owner who thinks you should run a baseball team like it is Wal Mart. Folks, we deserve better. We deserve to see October baseball. I’m not sold we will see it this year. What I do know is right now is not the time to straddle the fence on what to do with this team. It’s quite simple; as Yoda would say ” Buy or Sell, there is no standing pat.”