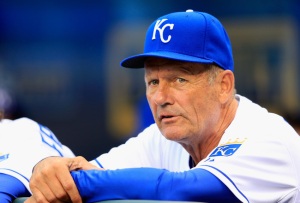 George Brett is a baseball legend. He’s a God in Kansas City. He is not only the greatest baseball player in Kansas City Royals history, he is the last true great player they developed. So over the years George has been able to get away with more than most people would. You’ve heard the stories. George is rude to a few fans on the golf course. He acts like a jerk when you go up to him with an autograph while he is eating. He isn’t fond of some of the media. He doesn’t like a stalker ask him for an autograph while at KCI:

Now, there is a whole story behind this. You can read all about it here. The short and skinny of it is that the guy has practically stalked him for awhile, gotten autographs from Brett(that the guy has then turned around and sold) and ” Brett is tired of the man’s relentless demands and behavior”, as he told a Royals spokesman. It makes sense to me. I can easily see where famous celebrities get tired of everyone hounding them 24/7, constantly wanting something from them. But this isn’t the first time something like this has happened:

Brett hasn’t ever really been able to keep his cool, even on the diamond:

I’m sure if you are a Royals fan reading this, you’ve heard stories. I have. Stories that basically don’t paint George in a good light. Stories that make him seem surly. Stories that make him look like a Grade A ass. I’m sure you’ve all heard one from someone you know, or maybe you even have one of your own. It’s not a big secret that Brett isn’t always the most fan-friendly person in the world.

But here is the thing: can you imagine BEING George Brett? He is the King of KC. Everyone still loves him, which means everyone wants a piece of him, even in public. Even when he is out with friends or with family. At some point, even the most polite person would get sick of it. The act would wear thin. Sure, at times George could handle those things better. But I don’t think we as fans should expect him to be perfect just because he is the reminder of good baseball in Kansas City. He might be our hero, but he is still human.

Sure, George Brett is my favorite player of all time. He is a big part of why I love baseball. I don’t always agree with actions like this when I hear about them, but I get it. I wish more people understood that being George Brett for one day would wear you down. This guys does it EVERYDAY! Maybe a little bit of slack should be cut for him. The guy isn’t perfect, and we shouldn’t expect him to be. I’m not saying that as a fan; I’m saying that as a fellow human being who sometimes myself feels overwhelmed…and trust me folks, I’m no George Brett! Remember that the next time you hear one of those stories. Just let George be George. If that isn’t enough, watch this video where my baseball idol talks about crapping his pants in Las Vegas. If this doesn’t scream he isn’t perfect, I don’t know what will!