Not huge news, but news nonetheless. Word leaked out today that Royals pitcher Luis Mendoza was being released today so he could sign a contract to go pitch in Japan in 2014. This is not a huge loss for the Royals, as Mendoza had become a long reliever and most in Royals management pegged him as nothing more than that (ie. Neddy Yost). Either way, Mendoza had been with the team for a few years now, and he will be remembered for a few things. For one, this was a guy who had an awful Royals debut back in 2010. Mendoza appeared in 4 games that and came away with a 22.50 ERA-in other words, 4 innings pitched, 10 runs given up. 10 runs!! Mendoza would then go to AAA Omaha, where he knew changes needed to be made. He told then Omaha pitching coach Doug Henry to help him, and he didn’t care how. Henry changed his motion, got Mendoza to throw the ball more over the top and moved his starting point on the pitching rubber. What transpired was a dramatically different pitcher, one who by the time 2011 had ended, had positioned himself into at least consideration for the Royals rotation in 2012. Mendoza then went to Spring Training that year, pitched lights out and won himself a job. Mendoza had a rough first half to that season, but was one of the most consistent starters the Royals had in the second half of 2012 and basically forced the team to keep considering him for a spot in this past year’s rotation. Mendoza started the year as a starter in Kansas City, but by July 7th he had been switched to the pen. Mendoza would spend the rest of the year there, though he was used very sparingly over the last six weeks of the season. ‘Dozer’ was a great story, that of a guy who went from being an afterthought to someone who worked his way onto the team. As much as I will miss his pitching, more than anything I will miss his hair. Oh, that beautiful, wavy, immaculate hair: 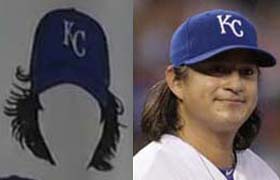 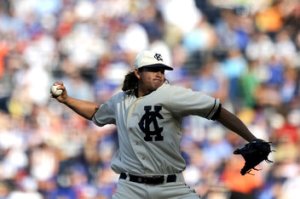 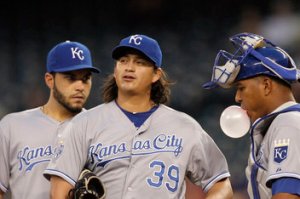 Those locks are going to be hard to replace. Best of luck, Dozer. We wish you nothing but the best.