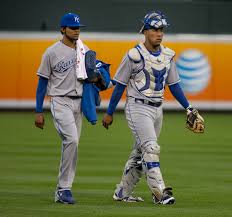 With a current crop of free agents now free and able to work out new contracts for the 2014 season, now is as good a time as any to take a look at one of the Kansas City Royals needs for next season. We’ve already taken a look at right field so now it’s time to take a look at the other major need, starting pitching. Now, the Royals don’t need as much help in this category as they have in years past, but with Ervin Santana looking to be gone, they will need to replace him AND maybe even pick up a second arm(you know, because injuries do happen). So with that said, let’s look at some of the team’s options at starting pitcher. 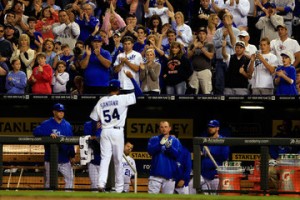 I know, I know. I already said he is gone. I firmly believe Kansas City isn’t going to be able to match the years and dollars that Santana is probably due, so he is as good as gone. But…there is that outside chance he could stay. Kansas City followed normal protocol this week and gave him a qualifying offer, which is made just as much for the draft pick the Royals would receive if/when he leaves as much as anything. Santana seems to actually enjoy being in Kansas City and is an upbeat part of the locker room. He even roots for the Chiefs on Twitter! So there is an outside chance he stays. But should he? I hate to say this because I’ve been just as supportive of Santana as anyone else this past season, but part of me wonders if it was a one year thing. Go ahead and look at the career stats. Santana has a history of following a good year with a bad year, or at least doesn’t seem like the most consistent pitcher on the planet. This guy will probably get anywhere from 3-5 years and fairly close to $20 million a season. For those numbers, I just can’t accept that it would be smart for the Royals to re-sign him. I love that he loves this team and wants to be a part of it. But you also have to be smart for the financial sake of the team. So more than likely, Santana will be elsewhere in 2014. 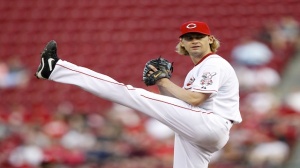 Arroyo seems like just the kind of pitcher Dayton Moore would want to sign, and I’m not completely saying that with snark or sarcasm. On one hand, Arroyo has been about consistent as possible over the years. The man has started over thirty games every year since 2005, and we could probably add 2004, as he started ONLY 29. He obviously is durable and  doesn’t seem to be made of porcelain like some pitchers do. BUT…he also gives up a lot of home runs, and gives up about as many hits per season as innings pitched. In other words, he is close to being a poor man’s Jeremy Guthrie. I like Guthrie, and don’t hate him like some folks, but I also know that part of his success could be attributed to smoke and mirrors. Arroyo is looking for a multi-year deal this off-season, which would seem to scare Kansas City off. But like I said, he seems like the kind of pitcher Dayton likes, so we can’t count him out as a possibility. 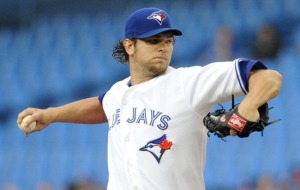 There is a big part of me that hates the idea of Johnson signing with Kansas City. For one, he would be one of those pitchers made of porcelain I mentioned just a moment ago. He just seems to have a hard time staying healthy. But there would be upsides to giving him a go. Johnson only wants a one year deal, as he is hoping for a bounce back season and then cash in on it. If the Royals could get him at a decent price, that would be great. We all know that Johnson has electric stuff and even just last season I was aboard the bus that would gladly bring him to Kansas City. But another injury riddled season has made me more skeptical about whether or not he can hold up. MLBTradeRumors.com predicted last week that he would sign with the Royals, which seems like the team’s modus operandi. Take a chance on a pitcher and get him at a good price. I’m fine with this if a)he doesn’t get paid too much and b)he isn’t counted on to be a major part of the team. Just like the Royals did with Danny Duffy and Felipe Paulino this year, if Johnson ends up in Kansas City they should just be happy with whatever they get from him. 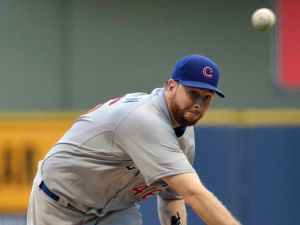 This feels a bit like deja vu. I mean, last year I felt like the Royals should go after this guy. Feldman was a reliever for Texas for the longest time before they shifted him to the rotation, where he found a bit of success. The Cubs signed him to a nice deal last off-season, then flipped him to Baltimore for a couple of young arms. A smart move by Chicago, who knew they weren’t going anywhere in the standings. Feldman is a free agent again, and he would seem a perfect fit for the back part of the Royals rotation. Feldman isn’t flashy, but he gives you innings, keeps the ball in the park and keeps the ball down. There is even a good chance he has even more success in a ballpark like Kauffman, the opposite of the parks he has called home in his career(Arlington, Wrigley and Camden). Feldman probably isn’t a top of the rotation guy, but he is a great fit in the back end and could probably be had at a decent price. 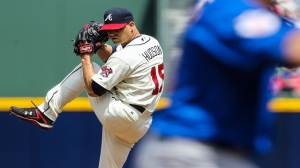 This would be a long shot for the Royals, but I would love to see Hudson in Kansas City blue. Hudson is coming off of a gruesome injury, so he probably isn’t going to get a long term deal, or even one that is pricey. Most expect him to end up back in Atlanta, and that is probably where the safe money is. But Hudson is a former Brave(see that? I just got Dayton Moore’s attention!) and a former top of the rotation starter. He’s not completely what he used to be, but he would still be a great addition for a team that is on the brink of playoff contention. The Royals should at least kick the tires on Hudson and see what it would take to sign him. Seems like a better option than someone like Dan Haren(who’s back issues scare me). 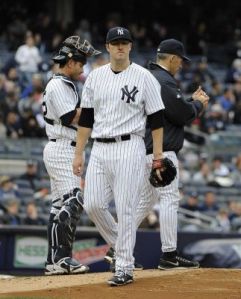 Hughes had an awful 2013 season. Like, REALLY AWFUL! To give you an idea, Hughes had over 30 starts, yet threw only 145 innings this past year! His biggest detriment was the long ball, which accounted for his stats to be so bloated. The positive that teams have taken away from Hughes though is that his ERA away from Yankee Stadium was a decent 3.88. It would seem that throwing in the Bronx, a park with a very short right field, does more damage than good for Hughes. There’s a good chance that Hughes will not be returning to New York and will want to sign a one year deal somewhere. Hughes at ‘The K’ could be interesting. He is at least someone to look into. 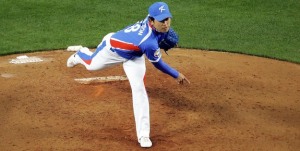 I mentioned earlier that mlbtraderumors.com predicted the Royals would sign Josh Johnson, and they also predicted Kansas City would sign Yoon. Yoon has been in the Korea Baseball Organization and is looking to make the jump to MLB. This seems like a weird choice, since Yoon had a rough 2013, as his velocity was down after competing in the World Baseball Classic. Yoon looks to be a back of the rotation arm, but with the decreased velocity might end up in a bullpen somewhere. As we are all aware, the Royals have bullpen arms. They don’t need another. Especially one who’s agent is Scott Boras, which means you will probably overpay for them. Just say no, Dayton. Step away. 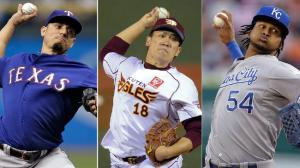 That’s just a look at some options the Royals will have this winter on the free agent pitching market. For all we know, Moore will make a trade and acquire a pitcher that way(for say, Billy Butler?) but if not there are some decent arms on the market. I could mention a few more that interest me(Burnett? Only wants to go back to Pittsburgh. Johan Santana? questions on if he can come back from injury) but these are some good choices. Either way, the Royals need a starter or two for next year if they want to compete. The team was lucky in 2013, as no major injury hit their way, so the chances of that happening two years in a row is slim. For all we know, a guy like Duffy, Paulino or Yordano Ventura will take up a slot and fill a void. Even if that happens, standing pat isn’t an option. Last year Dayton brought in two big starters. Competing means you have to go all in, and the window isn’t open for long. Let’s just hope the Royals are at least smart about this, rather than treat it like Monopoly money.