The second half of the 2013 season will get underway on Friday, so I thought it seemed appropriate to take a look back and see what I’d like to see happen in the back half of this season for the Kansas City Royals. This is sort of a companion piece to an article I wrote before the season about what the Royals needed to do to have a successful season. Well, so far we have a good idea of what kind of team they are at this moment; but what kind of team could they be? Let’s rub up on the lamp and find out if our wishes gets granted for our Kansas City Royals!

Early on this season, it seemed like a bad sequel to a movie that was bad in the first place. Like Staying Alive to Saturday Night Fever. Or Weekend at Bernie’s II: Electric Bugaloo. Anyway, Hosmer early on seemed to have completely lost any power he had and became a opposite field singles hitter. Moustakas looked like the pop-up king. It was ugly, folks. In fact, it felt like there was no way these were the same two guys who were thought of as the crown jewels of the minor league system just a few years ago. Then the two-headed Kraken known as Maloof and David were sent off to sea and in their place stood Brett and Grifol. Hosmer not only found his swing, but took over the team lead in homers in what seemed like just a few weeks. Moustakas has still struggled a bit, but he has pulled his average over .200 and his swing looks a ton better. But like early in the season, how these two go, so go the Royals. Hosmer has to keep up his pace in the second half, and Moustakas needs to add a bit more thump. If that happens, we are looking at not only a bit better second half, but a positive moving into 2014. 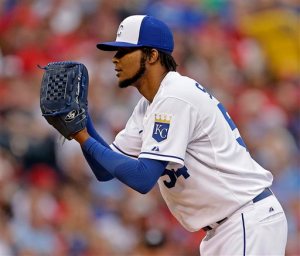 Look, we all know Ervin Santana has pitched above and beyond what we all thought he would do this year. In fact, he has been a solid #2 starter below James Shields, as those two have anchored this Royals rotation. But here is the honest truth: Santana is a free agent at the end of the year, and the Royals can’t afford him. Not only can the Royals probably not afford him, but he is going to want a 2-3 year deal. Now, would you feel comfortable signing Santana to a big money, multi-year deal? I wouldn’t. I would be afraid the old Ervin would show back up…and then the Royals would be on the hook for him for  a number of years. So, with the Royals not a contender(and let’s be honest, they really aren’t ready to contend just yet), it only makes sense to trade Santana to a contender. In fact, I think it is safe to say someone will overpay for his services. If that’s the case, the Royals need to pounce and take advantage of it. The Royals are fortunate to have a few extra arms that could be put in the rotation(Mendoza, possibly Duffy) and not majorly feel the blow of losing Ervin. The Royals have a need in right field and second base, so that is what the focus should be on. Word was going around awhile back that the Royals had scouts checking out the Padres, so maybe get someone from them. Maybe Logan Forsythe, since the Padres have no real place for him? Anyway, a deal needs to be made, and a good one at that. Trading Santana should be a no-brainer and would help set the Royals up for 2014, when they have a better chance of contending. 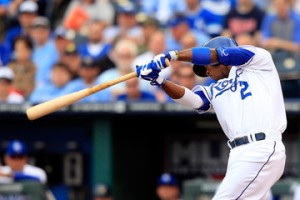 This is hard for me. I really love Alcides Escobar. Love watching him play on defense. I even still think he will find the stroke he had in 2012. No way that stays away forever. But…I don’t know if we are going to see it this year. To be honest, if it doesn’t, then he shouldn’t be batting second in the order. I mean, just look at his stats this season. Yikes. I know the old school believes you need a guy batting second who is fast and can move runners over(ie. bunting), but the truth is you want someone who has a good on-base percentage. Hell, even just an average OBP would be an upgrade over Escobar. I know Neddy likes to have Esky in this slot, but it is the definition of a true rally killer, unlike home runs. Hey, you never know; maybe Alcides will start picking up the pace and give Neddaniel a reason to bat him second. But until that happens, he should be batting at the bottom of the order. It also makes it to where Neddly can’t use his crutch of bunting as much. Blech, I hate bunting. So for now, someone batting second is the best thing for this ball club.

Wish #4-Listen to offers on James Shields and Greg Holland

So if we are playing with the thought that Kansas City is out of playoff contention, then that also means they are in selling and not buying mode. Now, I will preface this with the contention that I am not saying the Royals should go out of their way to trade Holland and Shields. I like both guys and would love for them to stay in Royal blue. No, what I am saying is the Royals should listen to any offers on these two. If you have followed baseball for any amount of time, you are probably aware that the trade deadline at the end of July can get pretty crazy. In fact, teams that think they only need one more piece are notorious for going nuts and making a trade that profits them in the moment but hurts them over the long haul. THAT is the team the Royals should listen to. If a team(any team) is willing to offer a ridiculous package for Shields or Holland the Royals should not only listen, but be hella-serious. For Shields, if a package like what the Royals sent the Rays for him falls in their lap, I would jump. Likewise, if Holland can get you better pieces for next year, it should be done. Shields is only around for one more year, and closers anymore are a dime a dozen to find, so there are reasons to entertain offers. Look, if no one bites, then there is no need to trade them. But if some crazy GM offers Dayton Moore something that will improve the team next year, he should take it. I would like to see these two part of the Royals future, but there shouldn’t be an untouchable label on either one of them.

I’ll admit, the Royals fooled me. Oh yeah, in the back of my head I had my doubts, but I thought it would be different this time. I wanted it to be different this time. But the truth is that the Royals just aren’t that into Johnny Giavotella. Sure, they talk a good game. Dayton Moore proclaimed him the starting second baseman when he was recalled from AAA last month. For the first week it appeared that maybe they really meant it this time. Then Neddy started to give him extra days off. Then he gave him back to back days off. Whoa, slow the train down there! That was a giant sign that the Royals don’t understand that just because you say you are doing something doesn’t mean that you are really doing it. You also have to back it up. Now, word gets out that the Royals picked Pedro Ciriaco off waivers from the Padres this week and the team has to make a corresponding move by Friday. I hate to be the pessimist, but it sure looks like Johnny will be headed back to Omaha. If that happens, so goes another “not really a chance, but we are going to count that as we gave him another chance” chance at winning the second base job. I openly admit Gio hasn’t just out and out taken the job. That part does lie on him. But outside of late 2011, when have the Royals really given him a true, real chance at the job? Maybe Spring Training? Whatever it is, you just get the vibe that the Royals are trying him more from the lack of not having a real second baseman than actually hoping to develop and nurture him in that spot. I don’t know if it’s Dayton that doesn’t like him, or Neddly. Hell, it sure appears that Neddly doesn’t like him at all, and we all know that cartoonist Lee Judge loathes him for taking away his boy-toy Getzie. So since the Royals don’t want to give Giavotella a real shot at the job, they should just do the guy and the fanbase a favor and let him go. Trade him to someone who will at least give him a shot. But don’t keep making him use the shuttle bus back and forth between Kansas City and Omaha and not even let him prove his worth over a lengthy amount of time. Because that would be called giving someone a real chance…which I’m not sure the Royals understand. 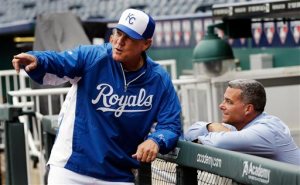 Trust me, I hate to sound like a broken record…but…well, I’ll still be calling for this until it happens. In fact it wasn’t that long ago I was writing how the best thing for this team was if they lost so these two jokers would get the ol’ heave-ho. Ask yourself this simple question: can you envision a Kansas City playoff game with these two in charge? I can’t. 100% can’t with Yosty. Probably about 85% with Dayton. This franchise deserves better. Kansas City deserves better. Hell, we fans definitely deserve better. So let’s make this happen guys…tank the second half and we can say sayonara to the “two man losing band”. Otherwise…well, you know. We’ve been through this for 18 years.