Jeff Francoeur is a polarizing figure for many Kansas City Royals fans. On one hand, you have a guy who is fawned over for his great character and his leadership in the clubhouse. On the other hand, you have a guy who is hitting .212 after a season where he might very well have been the worst starting player in baseball. All  of baseball. Whichever side you sit on, there is very little doubt that his time with the Royals might be coming to an end very soon…or will it?

What is pushing the issue at the moment is Jarrod Dyson’s rehab assignment. Dyson hurt his ankle earlier in the season in a game against the Angels, but has been in the minors the last few weeks rehabbing said ankle. From all accounts, it seems as if the ankle is holding up and he is currently halfway through a 20-game assignment in Omaha. Dyson could be back any day now, and when he does, the Royals have a decision. 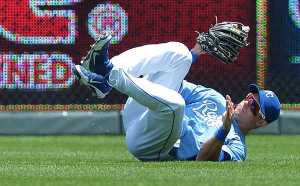 The decision seems easy to most of us. It comes down to either getting rid of Francoeur, or sending David Lough back to AAA. Just going off of stats, Lough easily should be staying with Frenchy being jettisoned. But remember what I mentioned earlier? The Royals LOVE Francoeur’s leadership and the intangibles he brings to the clubhouse. He also is a right handed hitter, which neither Dyson nor Lough are. Royals manager Neddaniel Yost loves his lefty-righty match ups, so there is a chance Frenchy will get a reprieve from exile and be kept around. Is this the right move for Kansas City? Probably not. Lough has shown he deserves to stay in the majors and has been solid both offensively and defensively for the Royals. 2011 really seems like the anomaly of Frenchy’s career, as his numbers over the years skew downward besides that one odd good year. Sooner, rather than later, we will know if the Royals really want to win, or are just serving lip service. 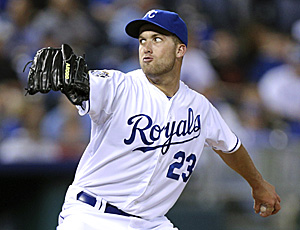 But that isn’t the only decision the Royals are going to have to make soon. Both Danny Duffy and Felipe Paulino are on rehab assignment down in the minors as they attempt to come back from the dreaded Tommy John surgery. Duffy is a bit farther along, as he has been throwing in Omaha while Paulino is still down in AA. Let’s start with Duffy first. Despite his last start, Duffy has thrown good but he does have options left and the Royals could decide when his rehab assignment is done to keep him in AAA and get more work in. That isn’t the worst thing in the world, as the Royals have a fairly solid rotation and it’s never a bad thing to take your time coming back from this surgery. The Royals could also use him in the bullpen, which is an interesting idea. Duffy throws in the mid-90’s and the idea of him coming in for an inning and just airing it out is very intriguing. The good money though is on him getting some more time in Omaha before being called up later in the season.

Paulino on the other hand is out of options and sending him down would mean they could lose him through waivers. Since Kansas City probably has no inclination on doing that, it is a safe bet that once he is done with his rehab, he will be on the main roster. But where do you put him? The obvious answer to most of us is moving Wade Davis to the bullpen and have Paulino fill his spot. But the Royals have invested a lot into Davis and he has shown enough in his starts that the Royals might not feel like giving up on the project of having him in the rotation. They also might send Luis Mendoza to the pen and have Paulino take his spot. Just thinking about that frustrates me, as Mendoza has earned his spot, but might be the odd man out. Yost has been adamant the last few years that he believes that Mendoza is a better fit as a long reliever but has been put in situations where Luis has to start. Soon enough we will find out how the pieces all fall in place and what direction the team wants to go with the back end of the rotation.

The Royals so far this year haven’t had to make a lot of roster decisions, but soon enough they are going to have to make some choices. Those choices are going to tell us two things about this team. One, it will tell us what they are truly valuing on this team and what direction this team truly wants to go. Second, it will tell us whether or not they truly want to win or they are telling us that but not truly taking the steps to do this. The right moves seem pretty obvious to most of us, but the Royals don’t always take logic into their decision making. Soon enough we will know, and hopefully it is for the betterment of the team.