Last night I watched my Kansas City Royals go out there and…well, they looked like crap for 3/4 of the game. No patience. Made Carlos Carrasco look like Cy Young himself and did everything in their power to not win that game. Funny thing is, the Indians didn’t seem keen on winning either, and alas lost the game to Kansas City. The Royals are back at .500, but things are far from perfect for this ball club. Probably the two biggest questions asked last month was ‘Why are Chris Getz and Jeff Francoeur still employed by this team’? Okay, that is one really long question. But you could ask the same question individually for these two, right? Never mind, these two don’t deserve two separate mentions. It’s a question that has been asked for awhile now, and the answer is pretty simple: Dayton Moore loves his ‘Golden Boys’.

Let’s start with ‘The man they call Frenchy’. Before the 2010 season was even over with, it appeared Moore was going to make a play for the former Brave. To be honest, it wasn’t going to be hard to convince Francoeur to come to Kansas City. Frenchy had spent most of the previous seasons on the bench for the New York Mets and Texas Rangers, so it wasn’t like teams were climbing over each other to be able to sign him. I remember knowing this was going to happen and just hating it. Francoeur was awful at this point, a guy who had a giant reputation as a great clubhouse guy but also a giant reputation for being a bad hitter. In my mind, there was no way this was going to end well. In 2011, Francoeur made me look bad, as he had a really good season and showed all the ‘experts’ that he still had some gas in the tank. Even Dayton was fooled, as he signed him to an extension that summer for two more years. So what had originally looked like a genius move started to look like a colossal problem waiting to happen….and boy did it happen! Francoeur had an awful 2012, a season where no part of his game was solid. Even his defense took a hit, as he went from being a solid defense guy with a great arm to one with no range or mobility…and a great arm. As good as a 2011 season Frenchy had, it was just as equally bad in 2012. It appeared as if THIS was the real Frenchy, not the guy who came to play in 2011. 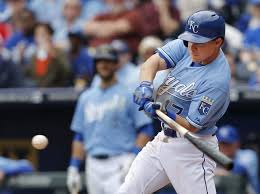 On the other hand, you have Chris Getz. Getzie, as his manager and Rex Hudler love to call him, was acquired by Dayton Moore in the winter of 2009 as part of the Mark Teahen trade to Chicago. No big deal at the time, as he was just a middle infielder who had played the previous few years for the White Sox. Early on it was evident that Dayton and manager Neddy Yost loved this guy. Every time he was brought up, they gushed about how he was “mistake-free” and did all the little things that don’t get credit. Injuries plagued Getzie and if that wasn’t enough, he just didn’t supply much on offense. The running joke was that it would take a miracle to even get him to hit a ball to the warning track, let alone over the fence. Bottom line, it appeared that AT BEST Getz was a backup, with that being even questionable since he could only play second base. Despite all of this, Getzie continued to get playing time, even over former prospect Johnny Giavotella. It was more than apparent that Royals management loved a guy who did a lot of things average and very little above that.

Now just looking at what I have supplied so far, it would appear that if the Royals were serious about contending in 2013, Dayton Moore would have at least looked into possible replacements for these two in the offseason, right? I thought so too, even if it was just as a safety net. Instead, once Wil Myers was traded to Tampa, it appeared the Royals were pretty much done for the off-season and Getz and Francoeur were the early favorites for their respective positions. Dayton had even said that he felt Frenchy could bounce back this year and Getzie would battle it out with Giavotella for second. As expected, both started the year as starters in the Royals lineup.

Not only have these two not performed better than last year, both have regressed even more. I feel dirty writing out the stats so instead I will link Getz’s and Francoeur’s. Both are putrid numbers, numbers that shouldn’t be accepted by any major league team. Both guys have pretty much been relegated to the bench, but even that seems like it is too much. So why do these two still have jobs? Because Dayton loves certain players, players with intangibles. Frenchy and Getzie fit that bill. They aren’t even the first of their kind, not even close. 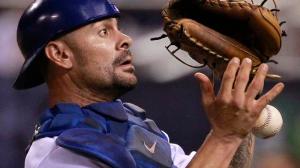 Jason Kendall was signed a few years ago by Dayton Moore, almost as a stopgap till some of their younger catchers(Read: Sal Perez and Manny Pina) matured enough to take over behind the dish. Now, Kendall wasn’t the worst player the Royals could have signed. He still knew how to handle a young pitching staff and worked well behind the plate. Sure, he couldn’t really throw anyone out, but for a guy in his late 30’s, he was fine for then. The thing is, he probably should have been a catcher who caught around 120 games a year, tops. Instead, he was in the lineup–every day. To make matters worse, he also was a regular near the top of the order, since he had a reputation of being a solid bat. Well, he had a solid bat in his prime. By 2010, he was a .250 hitter with his speed gone and was a singles hitter at best. In other words, the only way he should be near the top of the order is when he bats 9th and views the lead off hitter in the on deck circle. If it wasn’t for a career ending injury late in that season, who knows how much more Kendall we would have seen. The Royals love this guy so much that they have kept him in the organization. Hell, I’ve even said jokingly(or at least I think it’s a joke) that we could see Kendall as the Royals manager some day. Was Kendall good in his prime? Of course, he was an all-star. But by the time Dayton grabbed him from the land of misfit toys, he was a has-been. But they loved him–for his intangibles. A hard-nosed, gritty, playing the game the right way kind of guy. Which is fine–if he produces.

Willie Bloomquist was another Moore favorite. Willie was a career backup before he came to the Royals, a guy who played a lot of positions, but none good enough to play every day. He was the definition of a utility player, or a super-sub. Now, I had no problem with the Royals signing Bloomquist. Actually, I liked the signing. But that was because I thought we were getting a solid backup infielder. Instead we got a guy who played every day, at a myriad of different positions. A guy who had only had one season of more than 250 at bats, got over 400 in 2009, his first with the Royals. Once again, great guy, good glove and a solid bat. But he played waaaaaay  too much and (gasp) didn’t produce.

So we are back to the current day Kansas City Royals, a team that management thinks SHOULD be contending, but seems very poorly constructed. For every good acquisition Moore has(Shield, Santana) there seems to be an equal amount that fit the idea he has of what a winner really is(Getz, Francoeur). So for every step forward, there is a step (or two) back. What Dayton should be looking for isn’t a guy who can bunt really good, or one who loves being Captain Nut-Tap. It’s simple–he should be looking for good players. Players who can get on base, players who know how to pitch in pressure situations. Players who don’t hurt their team on defense, or can only be average at best. What Dayton Moore needs to realize is what he values(small ball, good character, hard-nosed, old school baseball players) doesn’t matter when you bring in players who aren’t good.   If they are serious about winning, bring players in who are good and know how to win. Then we can talk and I can be serious about this team. Until then, stay golden, Ponyboy.