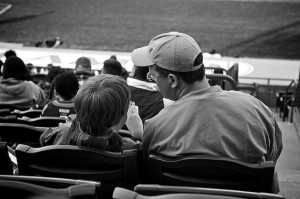 Father’s Day is coming up in a week, and it got me thinking about all the good memories I have at the ballpark, with my father and my son. Over the years I have gone to countless Royals games with the both of them. A lot of my memories that are burned into my mind from the K are ones I shared with one or the other. To think it all started in 1986… 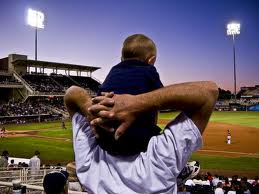 1986 was a great year to be a Kansas City Royals fan. The Royals had just won the World Series the previous year and sported a team full of All-Stars and fan favorites. Kansas City was the pinnacle of major league baseball. I had become a big baseball fan just two years earlier, and was completely enthralled with the ’85 team. My parents knew this and made plans to go visit what was then known as Royals Stadium on our summer vacation. I don’t remember much from the game; I mean, come on, it WAS 27 years ago! What I do remember was going with my parents, my sister , my grandma(who was a big baseball fan and the one who I always talked baseball with) and my cousin. I remember loving it and being in awe of the whole experience. If I wasn’t already hooked, that day sealed the deal.

From there we would go to a ball game every few years. I don’t remember a lot of specifics, but I remember one late night after visiting Kauffman Stadium. It had to be the late 80’s, and we were driving back from the game. For whatever reason what sticks in my head is my dad blaring Guns-n-Roses “Sweet Child O’ Mine” on that ride back. At the time it made no sense to me why he would do that, since it’s not like he enjoyed that type of music. It took a few years, but it finally dawned on me that my dad was trying to stay awake on the drive back, and blaring the music is what helped him keep his eyes open. That story always makes me chuckle when I think back on it. 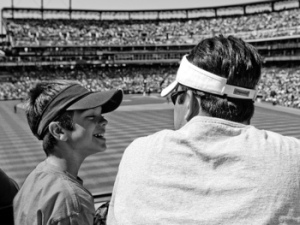 There was ‘Fight Night’ at the K, which was a fun night. The Royals were playing the (then) California Angels and late in the game people started leaving. But the fun was just beginning, as the first of two brawls broke out. The first one was a normal scrub, with both teams rushing out including the bullpens. There was a lot of standing around and not a lot of action. The same couldn’t be said of fight #2. Angels infielder Phil Nevin is hit in the back and once again, we are off to the races. Only this time it picks up, as Royals backup infielder Felix Martinez sucker punches a member of the Angels and this caused an even bigger melee. The Angels started going after Martinez, with pitcher Jack McDowell getting a hold of him and getting a few good licks in. During this entire time I am singing the chorus to Elton John’s “Saturday Night’s Alright for Fighting”, only changing Saturday to Tuesday. The look on my dad’s face while shaking his head was priceless. It was without a doubt the craziest night I’ve ever witnessed at a game and one I won’t forget anytime soon. 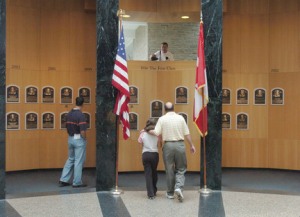 Maybe my most cherished baseball moment with my dad was getting to go to Cooperstown with him. In the summer of 1999, George Brett was being inducted into the baseball Hall of Fame and I was fortunate enough to be able to go with my dad. Brett has always been my favorite player and what better reason to head to baseball’s Mecca then to see your favorite player be honored for his accomplishments? From parking our rental car on the highway because of the high volume of traffic, to walking in a sea of people around this small village, Cooperstown on induction day is a once in a lifetime experience. To share this great moment with my dad meant the world to me. Sure, it started pouring down rain when we ran back to the car, but not even a few raindrops could sour my day. I felt really fortunate that day to have a father who encouraged my love of baseball and even participated in it. 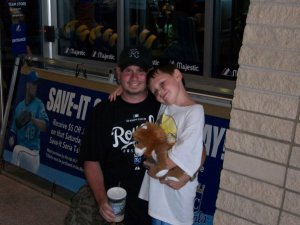 Once I became a father, one of my first thoughts was getting to take my son to a game. I have always loved being at the ballpark and could only hope he would enjoy it even half as much as I do. I took him to his first game when he was 2. He didn’t really know what was going on, and we spent a lot of time walking around the stadium but it was fun nonetheless.  In fact, for years Levi would never watch a baseball game with me on TV, but would love to go to the ballpark. We spent a lot of time walking around and not nearly enough paying attention to the game, but he still enjoyed it. But something funny happened these last few years–my son started really liking baseball. Not just liking it, but loving it like his father. 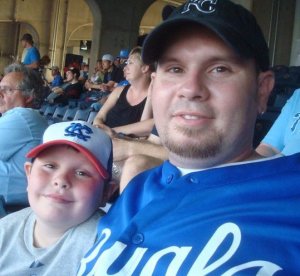 Not only has my son learned to really love baseball, he is a crack-up at the games. He has learned the fine art of heckling at the ball field. Now, before anyone accuses me of teaching him that, I’m pretty quiet at ballgames. I like to sit there and take in everything while enjoying the game. Probably my favorite Levi trash-talking moment was a game a few years ago. The Royals had brought in reliever Jose Mijares into the game and he had only been with the team a few weeks. Mijares throws the first pitch, which was a ball. All of a sudden Levi yells out “YOU SUCK MIJARES!!” loud enough for half the stadium to hear him. Let’s just say that phrase has stuck around and makes me laugh every time it’s uttered. 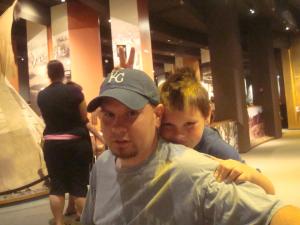 Last year for Father’s Day I got to spend the day in St. Louis, as a late birthday gift from my girlfriend. It was really great to spend that day with my son and get to enjoy a new ballpark with him. In fact, it might be safe to say he was even more excited than I was. Not only did we get to see the Royals battle state rivals the Cardinals, Levi also got to see his favorite player, Billy Butler, tie up the game in the 9th inning by hitting a home run. We didn’t stay around for the entire game(we stayed for 12 innings of a 15 inning game) but it was still a blast. Getting to share that moment with him will not only stay with me for years, but with him as well. 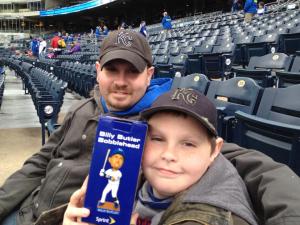 I’m a pretty lucky guy. I have all these baseball memories that I have shared with either my father or my son. Moments that when I am old and crazy(or older and crazier), I will still be able to hold onto. I never pushed my son into liking baseball, but he ended up loving it anyway and gives us something we can always do together that we both enjoy. My father has always supported my love of this sport(and it was his mother,my grandmother, that I shared it with)and is still able to fit a game into his busy schedule from time to time. Whether it is a hot day in the upper deck, or a cold night where I forget my jacket, we have all these stories around this great game. So thank you, Dad. You’ve given me something that can never be taken away. I already can’t wait until the next time I get to go to a game with you. Getting to be at the ballpark with my son and my father is probably the greatest thing in the world to me and makes me happy. So happy Father’s Day to all the father’s who love this game. We are truly the lucky ones.

2 thoughts on “A Father and Son Thing”