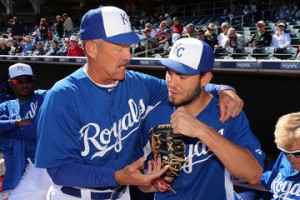 Well, my ‘no writing about the Royals’ lasted a whole two days. If you read my last article(in which I vented my spleen) you know a big part of my discontent with the Royals was them not making any changes while the team was sucking like a 40 year old hooker. Well, they’ve made a change but hopefully it’s not the last. It was announced earlier today that Royals hitting coaches Jack Maloof and Andre David were being reassigned to the minor leagues and George Brett and Pedro Grifol as the new interim hitting coaches. To say there are a number of interesting tidbits from this move might be an understatement. Let’s start with the one that most Royals fans are excited about: #5 is will be back in the dugout. 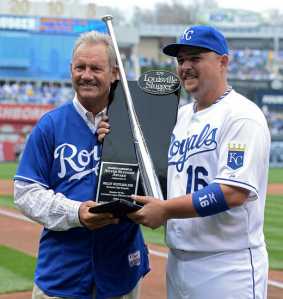 There is no bigger name in Kansas City Royals baseball history than George Brett. There is Brett, then a long ways till you get to runner up Frank White, who is probably the second most popular Royal ever. Brett is one of the few players who stayed with one team his entire career and even stayed with that team after his retirement. George is Kansas City Royals baseball. It’s interesting to see him leave the front office and take a position on the field though. Brett has helped out in Spring Training for the Royals for years, but it always seemed like he enjoyed not having to adhere to the daily rigors of being a major league coach. Being Vice President gave Brett the chance to remain in the organization while not having to deal with the day-to-day pains. George could go the park, talk to some fans, be Mr. Royal and then be done. He could golf all day and then just sit back and enjoy the game that night. He literally had the best of both worlds. So it’s more than curious to see Brett now go out on the road with Kansas City and be with the team every day. One would have to think this isn’t a long term thing, which is probably why the ‘interim’ label was thrown on there. My first thought was ‘he is going to do this until he misses being out on the golf course’. I very well could be right on that, but for now he is going to try and help the Royals fix their hitting woes. Maybe start having Jeff Francoeur hit off a tee. Sorry, couldn’t resist. One thing he can understand is struggling at the major league level early in his career.

Brett won the Royals third base job in 1974, but struggled early and often. The team sent him to the minors for awhile(much like the team has done in recent years with Alex Gordon and Billy Butler) but when he was brought back George started to work with Royals hitting coach Charley Lau. Lau reconstructed Brett’s swing and turned him from a struggling prospect to one of the best hitters in the game. I have to believe some of that wisdom that Lau pounded into his brain has kept all these years later and can be passed down to the guys like Eric Hosmer and Mike Moustakas. If anything, Brett knows how to hit in Kauffman Stadium. After the gibberish Jack Maloof sputtered out yesterday, I can just imagine what those hitting coaches were telling the Royals hitters. George won’t sugar coat anything and will tell a hitter if he is doing something fundamentally wrong. I can already imagine the conversation he might have with Francoeur. I honestly believe the best thing about having Brett as the hitting coach is that he will preach hitting the gaps, which is what the Royals hitters should be doing. Three-fourths of the Royals hitters are more gap hitters than power hitters, so asking them to hit more home runs is ridiculous. But asking them to hit for extra bases or hit with authority is not. One can only hope that having a legend in the dugout can reach some of these guys and turn things around. But this isn’t the sole reason Brett is coming in.

I have no way of actually confirming this, but my gut tells me the Royals put Brett in there as a PR move. If so, it makes sense. Kansas City fans love George. After all this time, he is still our favorite. Probably always will be. I can’t ever see a way where we turn on Brett. So putting him in this slot assures we never complain about it. It also takes the heat off of Neddy Yost and Dayton Moore, as Royals fan have been asking for their heads for weeks now. The Royals fanbase has been utterly pissed the last three weeks and have wanted a change to happen with this team instead of continuing to let the season spiral down the drain. Putting Brett in there shifts the focus and appeases the fans–for now. Most of us are smart enough to see this for what it is, but are still happy to see George. But he won’t be handling this job alone.

I’ll be honest, I don’t know a whole lot about Pedro Grifol. I can tell you he was in the Seattle Mariners organization for 13 years and worked both as a manager and within the Seattle farm system in a number of roles. It does seem like the hitting coaches job will eventually go to Grifol, and from the little I have read it seems like a good call. In fact, you can read some of Grifol’s thinking here.  It sounds like Grifol has a good idea of what he wants from his hitters and what he would want to work on. Working with younger players has been his forte, so working in Kansas City will be perfect. There is a good chance at first he will be the one to preach whatever philosophy Brett wants to incorporate. All in all, I expect Grifol to work closely with George before eventually gaining the reigns of the position.

Maybe one of the more puzzling moves in all of this is the re-assigning of Maloof and David. Both seemed like competent guys. Hell, Tony Gwynn had given Maloof his seal of approval. But it was obvious whatever they were teaching wasn’t working. I’m even surprised he was hired in the first place, as Maloof was NEVER  a power hitter throughout his playing career. In fact, he was more of a singles hitter who walked a lot–just like Kevin Seitzer. To top it off, that interview Maloof did was maybe one of the most confusing things I’ve ever read. If that was actually what Maloof believes, that the Royals shouldn’t even try to hit homeruns at the K, then he deserves to be fired. Just mind boggingly stupid comments. If it was Maloof going out there and trying to deflect the heat off of Yost, then mission accomplished. If it was Maloof wanting to jump off of a sinking ship, then he is a genius. No matter what, I’m not for sure I still want this guy in the Royals organization. Let’s hope he doesn’t preach his beliefs to the Royals minor leaguers, if those are in fact his beliefs. Sure seems like a firing here would have been a lot less messy. 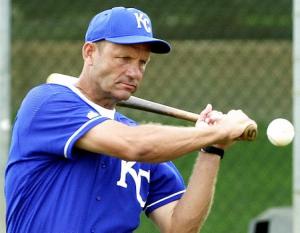 So will this move help the Royals? At this point, any change is good. I mean seriously: can it get any worse than it has been the last three weeks? The main thing is for the Royals hitters to listen and work on Brett and Grifol’s teachings. There is no guarantee this move will work, and in a lot of ways this is just a tiny band aid over a giant gash in the chest of this franchise. The real move that should be made is firing Moore and Yost and revamping the whole system. But for now, there is at least an effort being made. For us old time fans, seeing George once again in Royal Blue with the #5 across his back will be a great sight. Trust me, a loud ovation will be had at the first game back at the K next week. But there is a larger problem here that no legend can fix. More needs to be coming. Firing everyone and starting over seems to be the best idea for the future of this franchise. This is just step one.