It’s hard not to like new Kansas City Royals outfielder Brett Phillips. Whether it’s interacting with family and friends in his return to his hometown or his infectious laugh, it’s pretty easy to cheer for this guy. Or maybe you are like me and just enjoy his humor:

But there are more than enough reasons to be a fan of Mr. Phillips. For one, his defense is above average as we have already seen in his short Royals career:

So at this point, envisioning Phillips staying in Kansas City for the foreseeable future seems like a lock, right? With that said, there is one part of his game that needs some minor tweaking and that is his ability at the plate.

Now this isn’t a shock to anyone who had read the scouting reports on Phillips before or after he was acquired. For awhile now his hitting has been the one thing holding him back. Here is one such report from last summer:

My guess is that his batting average and OBP will be inconsistent, at least at first, but that his power and defense will make him a viable option even when he’s having contact troubles. He’s only 23 and still has a lot of development time. He has a shot at being a multi-category regular and at worst should be a valuable platoon player.

It’s lucky for both Phillips and the Royals that they have the time over the next few years to give him the room to grow. His raw tool set is going to make it a priority to allow him the time and see how far along he comes over the next two years.

The good news is that there are already some positives in his short tenure in Kansas City, albeit in a small sample size. For one, his line drive rate is sitting at 29% over the last month, which is a pretty healthy increase over his minor league career. While it would be nice to see him get the ball in the air slightly more with his power potential, line drives are always a sign of good contact and with his speed it can actually become an extra advantage for him.

He also has put up an impressive .355 BABIP during this span, which is telling us two different stories. One aspect of his BABIP is that when he does hit the ball, there is a good chance it is turning into a hit. The other aspect screams that he is striking out way too much, which means he isn’t getting the ball in play as much as one would like.

Phillips has struck out 25 times in 63 plate appearances as of Tuesday, which gives him at a 39.7% strike out rate. The last couple of seasons have seen his strike outs increase in the minor leagues, which feels like a direct correlation to the increase in his power numbers.

Most of us are aware that if a player is trying to hit for more power there should be an expectation that his strike outs will also see a bump. The goal for Phillips is to work on making more contact while not sacrificing too much power in the process. As we have seen over the years (with Mike Moustakas being the most recent) it could take a while for the power to completely develop and a lot of times is just a step in the maturation process. 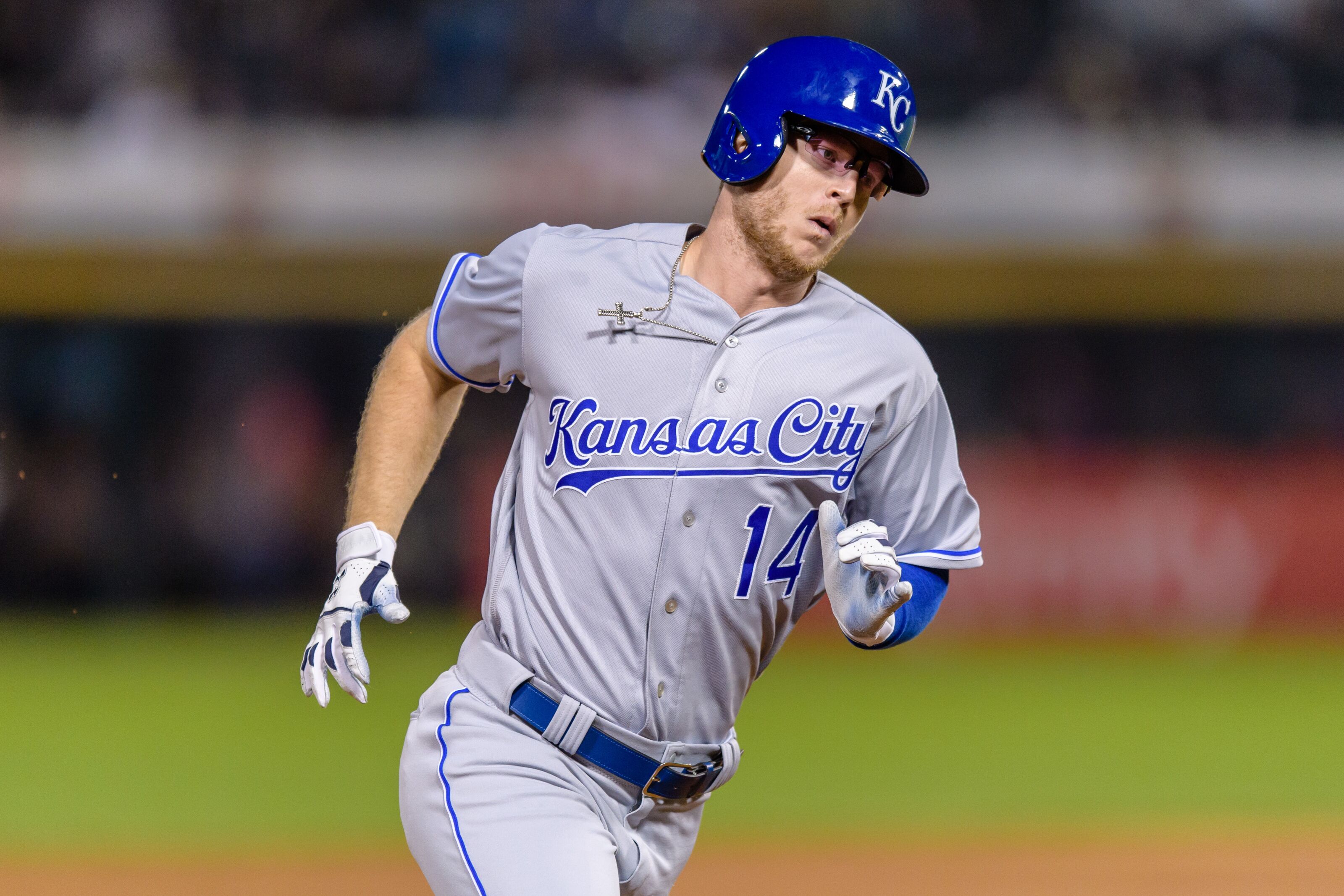 Phillips has posted a pretty good walk rate throughout the minors and while it is a bit lower over the past month (7.9%), it also feels like the small sample size makes this a moot point. The walks will come, more than likely, as he continues to adjust to his new team.

The power should also come, although the numbers tend to hint that he isn’t too far off. Out of his 12 hits in a Royals uniform so far, 5 have been for extra bases. There are some concerns (hard hit rate is at 28.1% over the last month, lower than Rosell Herrera) but it might be wise to remember the adjustment period he is going through right now.

Phillips has gone from not only a new team, but is dealing with a new league and even to a degree still adjusting to the big leagues. Before the trade to Kansas City, Phillips had only appeared in 122 plate appearances, which is slightly more than a months worth of appearances on average for a big league hitter. There is a lot being thrown his way to deal with and his level of comfort is probably not as high as it normally would be.

The good news is that there are a lot of positives to deal with as well. It will be interesting to see how he performs in September, considering he would have had a full month with his new team and hopefully has built up a decent amount of confidence by then.

Phillips has a number of tools that should help him along the way and give him the ability to work around any complications. It might not occur all at once the rest of this year or next, but since the Royals have to look at the bigger picture it’s not always about immediate gratification.

Instead, it will be about following his progress. Phillips isn’t going to turn into an All-Star overnight but there is no reason to think he won’t be a productive part of the lineup sooner rather than later. There will be bumps in the road and I’m sure at times we will see him struggle mightily. But the template is there; all it will take is for Phillips and the Royals to put in the work.