With Opening Day just a hop, skip and a jump away, it is a great time to look back on the 2017 Kansas City Royals squad and see how this season might develop differently. There was some good, bad and ugly with last year’s Royals and very rarely in baseball do things shake out the way they did the previous season. With that said, here are some items of note to keep an eye on as you get ready to make the Royals a part of your daily schedule.

One of the key elements of the 2017 team was the number of down years that appeared to fill up the roster. Alex Gordon, Ian Kennedy, Jorge Soler, Jason Hammel and Kelvin Herrera are just a few names that under-performed last year and are looking to “bounce back” this year and perform closer to the norm.

Most would take a league average hitting season from Gordon while Soler needs to just be the run producer the Royals thought they were acquiring when they traded Wade Davis to the Cubs. Kennedy would do well to keep the ball in the park a bit more (I would love to say keep the ball on the ground, but we just know that won’t happen) while also staying healthy.

Hammel’s ratio of baserunners allowed last year far exceeded the innings he was compiling, as he tossed 180 innings, giving up 209 hits and 48 walks. Limiting runners on base would go a long way toward improvement on his 2017 numbers that were less than desirable.

Herrera would do good to re-discover his curveball and use his cutter a bit less this year. It would also help him to throw more first pitch strikes, as that number took a dip this past year (60.6%, down from 64.7% in 2016). It felt like he was always pitching from behind in 2017 and throwing that first pitch strike could alleviate some of the other issues he dealt with last season, like walks and home runs.

Now the likelihood that all of these players produce like they have in the past is probably slim and none. But if the Royals can get a couple to improve or even put together solid seasons, it could go a long way toward helping some of the lackluster play we are sure to see at points this season.

I don’t know if anyone would have predicted the season that Whit Merrifield had in 2017, maybe not even Whit himself. Merrifield, like many players around the league, started putting the ball in the air more and was rewarded with a 19 home run, 78 RBI season to go along with a .172 ISO and a .332 wOBA.

Now the bigger question remains…can he repeat it? I have my doubts, especially since teams will focus more on him this season than they did last year. The key might just be whether or not he is able to keep the ball in the air. Last year his fly ball rate held at 40.5% (it sat at 29.8% during his stint in KC back in 2016) and throughout his minor league career he was able to hit fly balls in the upper 30’s/lower 40 % range.

Luckily, Whit has already gotten farther than many expected in the first place so it feels weird to doubt him now. It is going to be interesting to see how he adjusts to any changes he sees this year from opposing pitchers. This will go a long way to figuring out whether or not he is able to repeat a stellar 2017.

The Royals rotation last year felt like a revolving door for a good chunk of the season. Danny Duffy procured two stints on the disabled list, Ian Kennedy spent a portion of the year hurt and Nate Karns didn’t pitch in a game after May 19th. Add in the struggle of keeping a consistent pitcher in the 5th spot in the rotation and you can understand why the team continues to go after guys like Clay Buchholz and Ricky Nolasco to add depth.

While no one is really expecting this team to contend, how they perform will depend a lot on the health of the rotation. If Duffy, Kennedy and Karns are able to stay healthy this year, that would allow guys like Trevor Oaks and Andres Machado to continue to mature down in the minor leagues.

Last year the Royals were forced to use Onelki Garcia, Luke Farrell and even Travis Wood for five starts when all three should have never started a game. A healthy rotation would put less stress on the bullpen while also giving the team a strength that was evident in the early parts of 2017. For the Royals to not be basement dwellers this season, they need their starters to post more time on the mound than in the trainer’s room.

The Kids Are Alright

While the Royals front office has moved away from a complete rebuild, the template for this Kansas City team is still one of beginning the process of evaluating what some of their prospects are capable of at the major league level. In that regard, this season could very well shine a light onto who stays in the organization and who might not be a part of the Royals future.

Whether it is a Richard Lovelady or Kyle Zimmer in the bullpen, a Bubba Starling in the outfield, or a Hunter Dozier or Adalberto Mondesi in the infield, by the end of the season there should be a nice influx of younger talent on the roster. The interesting aspect of this whole process (yeah, I just said it) is not always what the numbers will tell us about their performance. Even if they face some adversity, the best thing for them and the future of this organization is allowing them to go out everyday and try to improve.

Dayton Moore has mentioned numerous times that a big part of the Royals championship team weren’t the players who were highly touted prospects, but the ones who flew under the radar and turned out to be big contributors to Kansas City’s playoff runs. The only way to find out what they have is to let them play. While the veterans will steer the ship to begin the year, it could be the youth movement manning the deck by the time September rolls around. 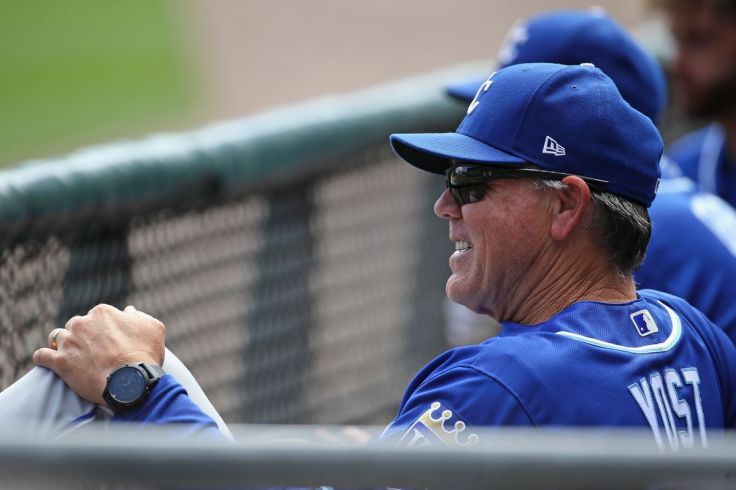 Finally, quite possibly the biggest change on this Royals team this year will be the addition of new coaches to help manager Ned Yost throughout the season. Terry Bradshaw, Cal Eldred and Vance Wilson were added to the coaching staff at the end of last season while Mitch Maier will continue his role as the first base coach that he assumed late in the 2017 campaign.

While on the surface the coaches might not be an exciting part of the “New” Royals, it very well could end up being a window into what we should expect from the team past this upcoming year. There is a good chance Ned Yost will retire after 2018 and the changes this coaching staff make this year could give us an idea of what the focus will be on for 2019 and beyond.

During the team’s infamous playoff runs in 2014 and 2015, it was well-known that the Royals were a team who focused on putting the ball in play while forcing the opposing defense to make the plays. The team was also known for their defense and while they didn’t shift as much as some other teams (I’m looking at you, Houston and Tampa Bay), there was a certain pattern to what they were trying to accomplish.

Will Bradshaw change the hitting approach? Does Eldred have some tricks up his sleeve that oppose what former pitching coach Dave Eiland would have done? Will Dale Sveum moving from hitting coach to bench coach effect any tactical decisions?

These are all questions that will be interesting to follow and see if there are noticeable differences from the previous coaching staffs. Baseball is a constantly evolving sport that has modified itself on a consistent basis. There is a high probability that the new Royals coaches could zig where the old regime would have zagged. To me, this will be one of the more intriguing plot lines to follow during this 2018 campaign.

While I’m sure I missed a few, these are the most obvious areas to keep an eye on for this upcoming season. Some will be good, some will be bad while others will just stay the same. The one constant will be the questions that will be added as the season progresses. The most important part will be how everything shapes up starting on March 29th. Change will be inevitable.