The Kansas City Royals have continued their thrifty ways during Spring Training, as the team made a number of notable moves centered around their pitching staff this week, as the team signed former Cubs reliever Justin Grimm who will be added to their bullpen. Then on Monday, the team came to an agreement with Clay Buchholz on a minor league deal, as the former All-Star will begin the year down in the minors. Then on Wednesday, the Royals made a trade:

Royals have traded RHP Sam Gaviglio to Toronto for cash considerations. He had been designated for assignment.

So as Opening Day looms, Kansas City has shuffled some of the cards with their pitching staff. All three moves have a certain significance, so lets start with the Grimm signing. 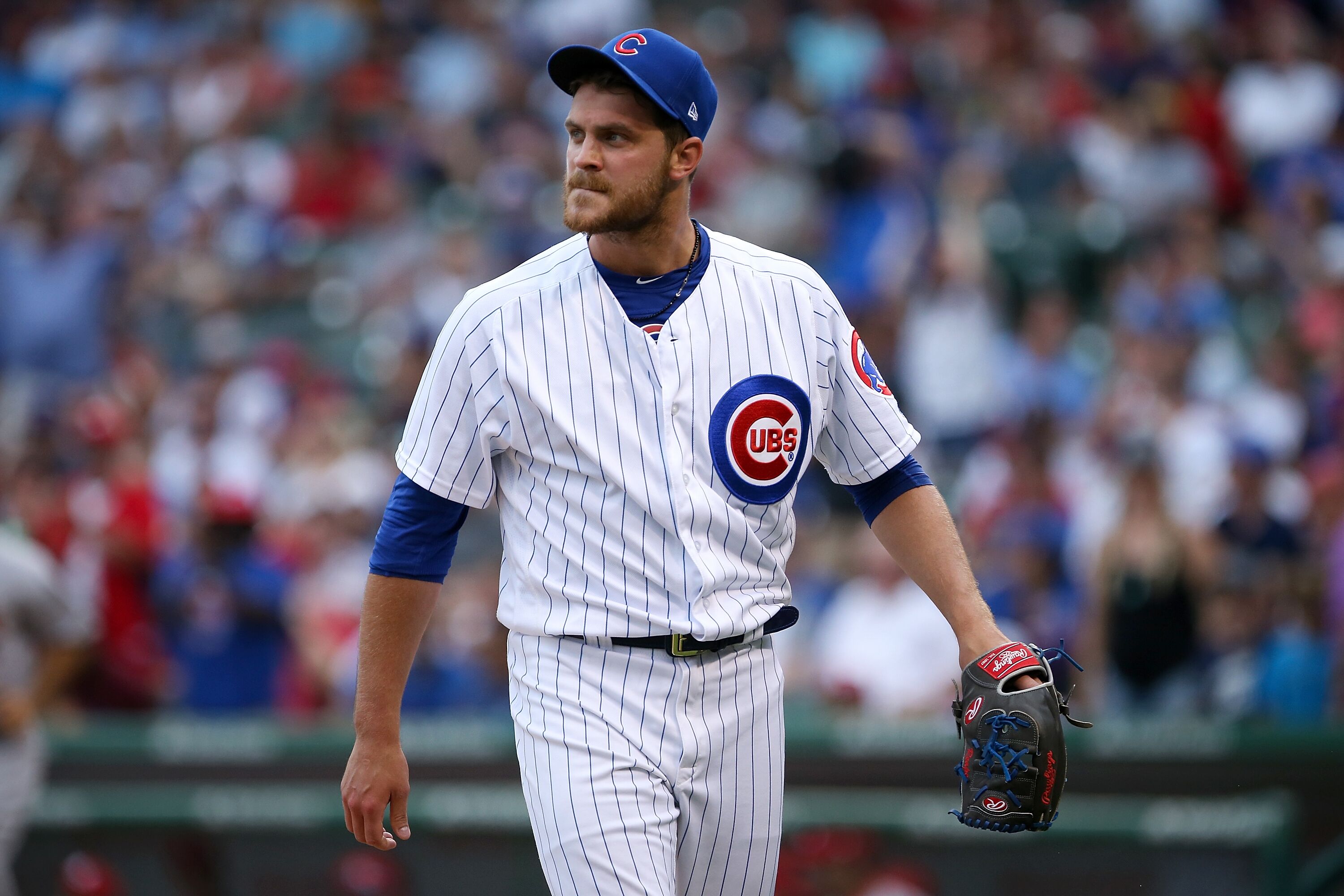 Grimm signed a one-year deal with Kansas City for $1.25 million. Grimm was cut the week before by Chicago and the Royals made room on their roster for him by designating Gaviglio for assignment. Grimm is coming off of a lackluster season in 2017, throwing 55.1 innings for the Cubs, posting an ERA of 5.53, a WHIP of 1.34 and -0.4 fWAR. Grimm struggled with the longball in 2017, as he gave up 12 home runs in those 55 innings, which gave him a 1.95 HR/9 ratio, the highest of his career. Grimm is another power arm for the Kansas City bullpen, as he had a 25.4% strike out rate in 2017 and over his career has averaged a 24% K rate.  He has also dealt with control issues throughout his career, averaging a 9.6% walk rate and an 11.6% rate last year. Grimm will be entering his age 29 season and could be a nice arm for Kansas City to use in a set-up role if he can lessen some of his control issues.

Kansas City also brought former Boston starter Clay Buchholz into the fold this week, bringing him in on a minor league deal. Buchholz only appeared in two games for Philadelphia last year, as he dealt with a torn flexor tendon in his right arm. Buchholz is only two years removed from a 2.7 WAR season, as he did that for Boston back in 2015, with an ERA+ of 132 and a 2.68 FIP, but he also only threw 113 innings that season. In fact injuries have been a big part of his downfall over the years, as he has only posted three seasons of 150 innings or more in his 11 year career. So where does Buchholz fit in for Kansas City? More than likely he will begin the year down in Omaha and get his feet underneath him before there is even talk of him making the trek to the big league club. His velocity will be interesting to track, since over the last few years he has seen a small decline on his fastball, which was down to 91 MPH in 2017. More than anything, Buchholz will be insurance for the Royals rotation, just as Ricky Nolasco was signed for. While Buchholz is intriguing because of his success in the past, he is also entering his age 33 season and is probably on the decline portion of his career. That being said, he might still have a few bullets left in his arm and on a minor league deal he is well worth the bargain.

Finally, the Royals dealt right-hander Sam Gaviglio on Wednesday, as he went to Toronto for cash considerations or a player to be named later. Gaviglio had a very brief career in Kansas City, as he was acquired late in the 2017 campaign and only appeared in four games for the Royals. In that short span, he had a 3.00 ERA, 4.24 FIP and 0.2 WAR over 12 innings. Gaviglio at best was going to be a long reliever/spot starter in 2018 for Kansas City and was probably ticketed for Omaha to start the season. The Royals have added a decent amount of depth for their starting rotation this offseason, which probably made Gaviglio expendable this spring. This move probably has very little effect on Kansas City, as his spot can be filled pretty easily within the Kansas City organization.

With the Grimm signing being the only move really affecting the main roster, it is evident the Royals are gearing up to set their roster before next Thursday. It also shows the team is constantly evaluating and not standing pat with what they have. It’s possible we won’t ever see Buchholz in KC and Grimm could be a plus or a bust for the pen. At the very least it shows Dayton Moore knows how important pitching depth is for any team during the long baseball season. There are no issues from me with any of the moves and hopefully at least one pans out. If not there is nothing really lost. If anything, this shows the team that talent is constantly being scouted and as much as some fans would prefer the Royals tank this year, if it happens it won’t be because of a lack of trying on the front office’s part.

For the last three years, the Kansas City Royals have teased us with using a floating Designated Hitter in their lineup rather than having one player entrenched into the role on a daily basis. It was originally bandied about back when Billy Butler became a free agent after the 2014 season…and then the team signed Kendrys Morales. It was brought up again last winter…and then the Royals brought Brandon Moss on board to fill the role of full-time DH.

It feels like the Royals are thinking about the idea but just don’t want to commit to it. It’s the equivalent of dipping your toes into the water at the pool without just diving in. While the team has flirted with the idea before running back to what they know, it finally appears this is the season they commit to using the DH for a whole gaggle of players…and it couldn’t make more sense than it does right now.

When Spring Training started last month, the DH wasn’t designated for just one player but it appeared the RF/DH combo of Jorge Bonifacio and Jorge Soler would see most of the at bats there. The team had committed to letting their young players play and getting Bonifacio, Soler and Cheslor Cuthbert at bats seemed to be their main goal. Then they signed Lucas Duda. Then Jon Jay. Finally, they brought back Mike Moustakas. At this point it was hard picturing those younger guys getting the 400 to 500 at bats that management wanted them to rack up.

But then Bonifacio was suspended 80 games for testing positive for a performance enhancing substance. That appeared to open up at bats for the likes of Cuthbert and Soler and made the idea of a floating DH even more enticing. With Bonifacio’s suspension, the Royals are now in a situation where they can use the DH as their own little testing ground.

Cuthbert appears to be the one who would benefit the most from this, as his at bats seemed to go up in smoke once Moustakas was signed. Now, he could slide into the DH role while also occasionally filling in at first base ( Duda’s splits career-wise against righties are .249/.356/.486 while against lefties they are .218/.289/.370) and third base. Michael Saunders also could see some time at DH, as he would add another left-hander to the lineup and give someone a day off.

Speaking of days off, the best reasoning for going to a revolving door at DH would be to give some of the regulars time off and let them rest their legs. No one would benefit more from this than Salvador Perez, who has worn down physically these last few years from all the wear and tear behind the dish. Giving Salvy a few days a month where he doesn’t have to squat a gajillion times but can still keep his bat in the lineup feels like a win-win situation. It would also benefit some of the veterans in the Royals lineup like Alex Gordon, Lucas Duda, Jon Jay or Mike Moustakas. The season is a long one and when you give some of your older players a break during the long, hot days of summer it can only benefit your team.

It also can make it easier when Bonifacio returns from his 80-day suspension. His return would probably (unless there is an injury) push Soler to float around a bit more. As Bonifacio would be working himself into mid-season form, this would also give him the occasional rest, letting him get at bats while resting his legs. Bonifacio won’t be able to just slide back into an every day role, but this would allow him to still get playing time while not pushing him too hard on his return.

This is without even mentioning the possibility of any players being recalled from the minors. What if the Royals decided to add Hunter Dozier or Adalberto Mondesi to the mix, or even someone like Bubba Starling or Ryan O’Hearn? While none of these are guarantees, leaving the DH spot open also leaves open different scenarios that could play out as the season progresses. Not locking just one player into the role allows the team to be creative while also getting a chance to see what they truly have on the roster.

In fact, that flexibility is exactly why more and more teams have ventured away from employing a full-time DH. In 2017, only ten batters had enough plate appearances as the designated hitter to quality for the batting title. Of those ten, only five posted a wRC+ of 100 or more (Ryon Healy straddled that league average with exactly 100), with Nelson Cruz, Corey Dickerson and Edwin Encarnacion being the only notable batters to fill this role while also posting 2.5 fWAR or more. Most teams have realized the freedom they are allowed when they tear away from the shackles of one lone DH and treat it as a revolving door.

So with about two weeks left until Opening Day, it appears the Royals might actually do what they have considered for years. I have long been a proponent of the team employing a floating DH and I’m even more intrigued by it now that it might actually happen. No matter the outcome, if the Royals follow this plan they will benefit from it one way or another. Whether it is a player performing above expectations, or resting some of the regulars, this is a plan that more than anything will allow them to know what they really have with the crop of talent on the roster. It might be scary and it might be the great unknown, but it’s time. It’s time for the Royals to jump into the pool and let the DH be a revolving door.