We are less than a month away from the Major League Baseball regular season and actually having games that mean something being played. Until then, Spring Training continues to develop a number of interesting stories. A number of questions filtered into Kansas City Royals camp this spring and it’s still to early to have any definite answers. But we are gradually getting there and at least have a better idea of how everything is going to play out for the Royals. So today, let’s look at five questions that have been lingering in Royals camp since the players first reported to Surprise, Arizona.

Who Will Be the Starting Second Baseman?

If there is competition for a position in Royals camp, it is the second base spot. This has been labeled as a four-man battle, with Christian Colon, Cheslor Cuthbert, Raul Mondesi and Whit Merrifield all vying to be the starter. Most of the winter it has appeared as if Whit Merrifield would be the man locking down the spot to start the season, which very well might happen. But Colon and Mondesi have made it interesting, especially Mondesi:

Raul Mondesi just delivered another single into left field. He's been a certified standout during the first week of games.

Mondesi has been hitting at a .529/.529/.765 clip and has definitely opened some eyes this spring. While Colon hasn’t lit the world on fire, he does have a couple of extra base hits out of his 4 hits this spring and spent the winter working out with teammate Alex Gordon:

Christian Colon just scored from second on a two-run single from Bubba Starling off Rich Hill. Colon is moving pretty well this camp.

There hasn’t been much talk about Cuthbert yet this spring, at least when discussing the second base job and the belief with him has been that he doesn’t have the range and footwork to handle second base on a regular basis. The Royals really love Whit’s versatility and while I would assume he will see a healthy amount of time at second this year, there’s also a good chance we see him float around to a number of different positions. The other interesting aspect of this struggle is that both Colon and Cuthbert are out of options and it would appear that almost guarantees them a spot on the roster to open the season. There is also this little tidbit from manager Ned Yost:

This tells me that the position battle will probably continue into the season. If I had to guess what will happen, Mondesi will get sent down to the minors for a bit more seasoning to start the season and Colon will get the start on Opening Day. But we very well could see Mondesi before the season is done and we might even be discussing an upgrade at the position as the season progresses. This is a battle that just can’t be contained by Spring Training; expect second base to be a position in flux.

Who Will be the 5th Starter in the Rotation?

What was once a three-way race has become a four-way, as Mike Minor has joined Nate Karns, Travis Wood and Chris Young in the conversation for Royals 5th starter. So far Minor has the best numbers this spring (zero runs allowed over 4 innings), but the other three candidates have only allowed 2-3 runs in around 5 innings apiece this spring. Young would appear the most likely to end up in the bullpen, as he would be able to fill the long reliever role for Kansas City, while Karns and Wood are evenly matched. Wood has had better numbers over the last few years out of the pen, but Karns combination of mid 90’s fastball and elusive knuckle-curve entices me as an option in the back-end of the Royals bullpen. My early guess is that Minor and Karns start the year in the bullpen while Wood wins the rotation spot, but…it is a long season and I would assume at least 2 of the 3 other options end up picking up a few starts before the season is over.

What Should Kansas City do with Peter O’Brien?

It didn’t take long for people to notice big Pete O’Brien this spring, as he is the early leader on the team in home runs and second in RBI’s. O’Brien has what many consider “Game Changing” power or “Light Tower” power, the kind of pop that can’t be taught. His early power show has had many asking if the Royals will be able to find a spot on the roster for O’Brien and while I believe there should be a spot for him at some point, it might be better to wait a bit before Kansas City brings him onto the major league roster. While O’Brien has put on quite the show, he has also struck out 8 times already this spring in 22 at bats. The other factor is his splits over his career, which heavily lean toward more success against lefties than righties. Add in his lack of defense and you have a guy who is probably best suited to being a platoon player at DH. The best situation for O’Brien would be to take over the right-handed half of a DH platoon with someone like Brandon Moss, which could be very doable later in the season. But right now, that appears to be a spot that is being reserved for Cheslor Cuthbert, at least for the present. But it is hard to ignore O’Brien’s power and it would only make sense for Kansas City to give him a few AB’s if he gets hot in AAA. It’s probably doubtful that he ends up on the Opening Day roster (barring an injury), but there is no way we have heard the last of “Tank” O’Brien (we are going with that nickname, right?).

Will Kyle Zimmer Be Able to Stay Healthy This Year?

If you are a Royals regular, you know this has been one of the main questions among the Royals prospects for at least the last few years. Zimmer has long been near the top of the list on the team’s prospect charts yet can’t seem to stay healthy long enough to be taken serious as a contributor for the big league club. Just last year, Zimmer threw 5 2/3 innings before being shut down and getting thoracic outlet syndrome surgery. That alone makes Zimmer a question mark this year, as it would appear he would need to build his arm back up. In fact, the team has already re-assigned Zimmer to minor league camp earlier this week. But the bullpen is always an option for Zimmer and if (a big IF) he can stay healthy, he could be seen in Kansas City’s pen come August or September. His velocity this spring has not taken a dip (which it did last year from inning to inning) and so far he hasn’t had any issues with pain in his arm. It seems likely he will encounter an issue at some point this season of “dead arm”, but that is more because he hardly pitched last year than a symptom of his health. When healthy Zimmer clocks in with a mid 90’s fastball and has a healthy curve that can be deadly. For now, it is best for Zimmer to build his arm back up and be allowed to just go out and pitch. But if all goes well, we could be talking about Kyle Zimmer again late in this 2017 season.

Will Any Royals Prospects Contribute in Kansas City This Year?

In some ways this ties in with the last question but there are some new, fresh faces and names we could be hearing from in 2017. Josh Staumont is at the top of the list, as the fireballing righty really seemed to turn the corner in 2016 and could be a lethal arm out of the pen for the Royals this summer. Hunter Dozier in some ways is a man without a spot, but he can also fill  in at a number of positions if needed, as he has seen time at third base, left field, right field and even a little bit of first base this spring. Lefty Eric Skoglund could see some time in the bullpen and Kevin McCarthy could help out in relief as well. Position player-wise, there isn’t much on the immediate horizon for Kansas City, but if things get too bad Jorge Bonifaco could be called in to play some in the outfield. Overall, this Royals team has quite a bit more depth this year and because of that there probably won’t be a large influx of minor league talent getting considerable playing time in 2017. Now, 2018 might be another issue altogether… 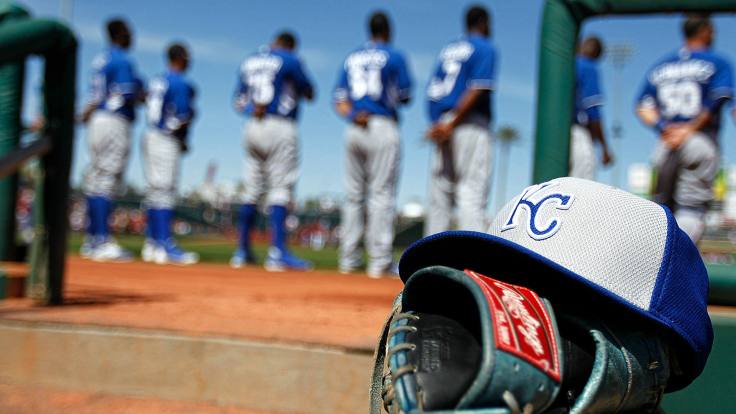 While these aren’t the only questions at Royals camp this spring, these are the main ones and soon enough we will have answers to these questions and more. We are about three weeks from games that count and it would appear that Kansas City is in a good position to make another push at postseason play. Now how that will all unfold…well, that within itself is another question entirely and one we will have to see play out throughout the summer months.