The Kansas City Royals traveled to Cincinnati this week for a short two game series that could be a short but sweet set. Instead, you got some ugly baseball, a 13 inning affair on Tuesday, a rain delay and on Wednesday the umpire made it to where the game could have been referred to as “Honey, I Shrunk the Strike Zone”. The Royals came away with a two game sweep but these two games felt like the two longest games played the entire season, even though they weren’t. Time to meander into this series and look at the good, the bad and the ugly.

If you are a Royals fan and aren’t gushing about Ben Zobrist, what are you waiting for? Zobrist dominated this series, going 6 for 11 with 2 doubles, a home run and 3 RBI’s. The fun part was that it wasn’t just how often Zobrist got on base, but when he would get his big hit. First was his big home run against Aroldis Chapman in the 9th on Tuesday to tie the game:

Once again, this was off of Aroldis Chapman!

Aroldis Chapman had converted 56 straight saves at home before blown save Tuesday, the longest streak since saves became official in 1969.

Zobrist’s day was not done yet as he would extend the Royals lead with a single in the 13th inning:

Yes, even Ben Zobrist can get an infield hit. Ben would follow that up with a four hit game on Wednesday to help pace the Royals to another ‘W’ and the series sweep:

Since coming over to the Royals from Oakland, Zobrist is hitting .379/.468/.636 with 5 doubles, 4 home runs, 13 RBI’s and 12 walks. I was a big fan of Zobrist’s ability to get on base and his versatility on the diamond before he became a Royal. Now that he is in Kansas City, that admiration has grown:

Zobrist seems to have a lock on the second spot in the lineup and with Alex Gordon about a week and a half away from returning to the main roster we could start seeing Zobrist getting some more playing time at second base. There has been a lot of talk about how big acquiring Johnny Cueto has been for the Royals, but getting Zobrist has added another dimension to this team’s lineup and opened up the possibilities for this team come October.

It almost is getting redundant mentioning ‘Edinson Volquez throws another quality start’. You almost wonder where the Royals would be if Dayton Moore hadn’t taken a flyer on Volquez this offseason and brought him into the fold. On Tuesday, Volquez started against his former team, throwing 6 innings, giving up 4 hits and 1 run while walking 3 and striking out 7. Volquez got himself into a few jams but was able to wiggle his way out of them, including a little help from Mike Moustakas to wrap up the 6th inning:

It’s a pretty good estimate to say Volquez will be the #2 starter going into the playoffs this year(unless Yordano Ventura starts rattling off some gems) and he has definitely earned it. You always have to worry a tad about bases on balls with Volquez, but when he just throws and allows the Royals stellar defense to do the rest, he is as good as gold.

Nothin’ Worse Than Some Ugly Baseball

If you tuned in to Wednesday night’s game, you probably realized pretty early on that it was going to be a long night. Not just because of the close to two hour rain delay, but because both teams were working with a tiny strike zone. All you have to do is point to Chris Conroy’s minuscule strike zone to see why we saw such an ugly brand of baseball that night. Sprinkle in a couple of mediocre pitchers(Keyvius Sampson for Cincy, Jeremy Guthrie for Kansas City) and you have a recipe for a game that I felt would never end:

I have a feeling this game could last awhile. #Royals #WhataStrikeZone #ForeverRoyal

If this #Royals game keeps up this pace, I should be an AARP member by the end of the game. #ForeverRoyal #PickUpthePaceUmp

By the end of the 3rd inning Sampson was close to 80 pitches while Guthrie had surrendered multiple home runs. Now to be fair, Conroy was consistent with his strike zone, as it was tight for both pitchers, as noted by manager Ned Yost:

Yes, lots of balls. There were 9 total walks in this game, a game that last 3 hours and 38 minutes but felt like 13 hours and 38 minutes. It didn’t help any I was stuck listening to Steve Physioc call the play by play for the duration of this game; that’s enough to drive any person crazy! This got me to thinking. You hear people who don’t like baseball mention that it takes too long and that the game can be very boring. Most of us scoff when we hear that; we love baseball and love that it works at its own pace. We also love the little things that someone who only occasionally watches doesn’t notice or realize why this move is made for this reason. We love the intricacies. But even I hated what was going on Wednesday night. I mentally was done with this game in the 5th inning, and folks, that just doesn’t happen very often. This was ugly baseball that no one should have to appreciate. I don’t normally rag on the umpires(for the most part I think they do a good job) but umpires with tiny strike zones befuddle me. It makes no sense. Major League Baseball wants to pick up the pace of the game, which is fine. But maybe they should look at umps like Conroy, who make a game drag on by making a pitcher work with a strike zone the size of a moist towelette.  Bigger is better, at least when it comes to the strike zone. 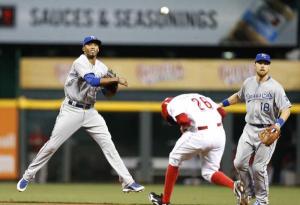 It was only two games, but there was more to digest. Let’s divvy up some news and notes from the ‘Queen City’:

If there is a Game 7, it would be on November 4th. I don’t know about you, but baseball should be done before November 1st. MLB needs to fix this for next year. I’m afraid we are getting closer and closer to a World Series game being played close to Thanksgiving.

Alas, after review Cain was called out and the game would continue. I only wish I had half of Cain’s move. I would have killed it at pickle:

I wish I could have used that move during all those years of pickle. Then again, I'm not Cain. #Royals #ForeverRoyal

Both pitchers sat out 2014 with Tommy John Surgery and both made their returns this year. The ‘W’ is more about them being able to persevere and make it back successfully than an indication of their greatness. Kudos to both, as they have been pluses for this Royals team this year.

A few minutes later, the new guy shows up for some Z-Mans! From one Z-Man to another, welcome to Joe's, Ben Zobrist. pic.twitter.com/lV9B0svLo9

The Royals position players at #4…even with Rios & Infante. https://t.co/IL6AL5Ar15

#Royals Mike Moustakas has 109 hits on the season with a month+ to go… Last year he only had 97 hits all year. pic.twitter.com/pIqYEO4o9q

Why Frank White will be on the Kauffman Stadium field for the first time in nearly four drama-filled years. http://t.co/KlAzdPbmKp

The Royals now have a 12.5 game lead on the division. 1980 is the only other season in which they've had a lead of this size at any point.

If Alex Rios has a wRC+ of 60 in the forest, does anyone realize he should be replaced by a Dyson/Orlando platoon(or Eibner)? #Royals

.@Royals are 1st team to hit 100% on the Playoff Odds Rankings, take #1 spot from #STLCards

I always get a really warm feeling whenever Ned Yost gets thrown out of the game. Old habits die hard. #Royals #ForeverRoyal

Royals-Reds: 14 relievers used, none for more than one inning. Clearly, both managers expected this one to only go 13 innings.

The second place Minnesota Twins are closer to the worst-record in baseball than they are to the first place Kansas City Royals.

Only one #Royals team has won 100 games. @ryanfagan chatted with some guys from 1977 club: http://t.co/USfY6DjLw7 pic.twitter.com/69e1ZIN5AT

Lorenzo Cain is now hitting .389 with 2 outs this season, the second-best average in MLB to Miami's Dee Gordon. @Royals

It's still mid-August and the #Royals have a magic No of only 29 to clinch their 1st Division title since 1985.

The Royals now venture to Boston for four games with the magic number of 29. The Twins are long in the rear-view mirror so the Royals are playing more at this point to secure home field advantage through the playoffs. As we get closer to October, there are some questions that Royals manager Ned Yost will have to answer. How long of a leash does Alex Rios and Omar Infante get? Where all will Ben Zobrist play once Alex Gordon returns? How long does Jeremy Guthrie keep his spot in the rotation? Will Kris Medlen get a start before the season is done? And what will those Duke boys do now to get out of this sticky situation? Okay, maybe not that last one. The rest are legit and could be answered sooner rather than later. The Royals have nothing but American League East opponents this next week and a half, which the Royals have had issues with these teams so far this year. A good showing is strong support in case they have to face any of them come playoff time. Right now is all about keeping the course while also keeping an eye on October. It is a great spot to be in with just over a month left in this 2015 season.