I am not the biggest fan of interleague play. I get why it is interesting but after close to twenty years, it just feels played out to me. I’m sure for some it still has its appeal, just not for me. All that being said, I was excited for this three game series. The Royals would be going up against one of the best teams in the National League, a team that I’ve often referred to as ‘The National League Royals’. There are many similarities between the two teams, so it was almost a guarantee this series would be a fun one. Luckily for us, it was not only an exciting three games but it also went to the Royals as they won it, two games to one. Time now to see just how everything went down in these three games that were all sold out at ‘The K’. 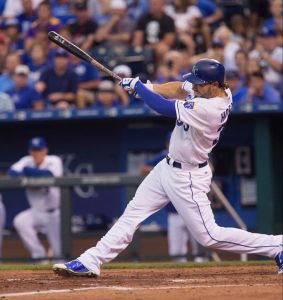 I believe it is safe now to say that Eric Hosmer has hit a hot streak. Hosmer might be one of the streakiest players on this Royals team(Alex Gordon is also pretty streaky) and it is always nice when the pendulum swings around to the hot side of the streak. Hosmer went 6 for 10 in these three games, with 1 double, 1 triple, 1 home run and 2 RBI’s. Oh, he also walked once and had a BAbip of .740! His average has jumped back over .300 for the first time since June 19th, and has raised his slugging percentage almost 20 points in the second half of the season. The best part of this is that Hosmer is driving the ball and doing so in critical situations. Right now, Hosmer’s wRC+(weighted runs created, which is league and park adjusted) is 126; the highest it has ever been since his recall to the majors is 120 back in 2013. If Hosmer can keep this up for the next few weeks(and I would say longer, but hey, remember, he is streaky!), he could help push this Royals team higher up on the food chain at an important time of the season, as the Royals will be playing Houston, Cleveland, Toronto and Detroit over the next few weeks. As if this wasn’t enough, Hos also hit an absolute bomb on Wednesday night, just a massive shot to right field:

It is the second longest home run of his career pic.twitter.com/UssIz2OJrB

That home run was also important for its significance:

Eric Hosmer has 9 home runs this season. That equals his home run total from all of 2014. #Royals

I don’t think I will ever tell you that how Hosmer goes, so go the Royals. What I can tell you is that this offense is better when Hosmer becomes a force in the middle of this lineup. Right now, he is front and center when it comes to Royals producing for this team.

What was the best signing for Dayton Moore this past offseason? I won’t fault anyone who says Kendrys Morales and at some point we might all say Kris Medlen(more on him in a bit), but as of right now I would have to say Volquez has been the best. Looks like I am not the only one:

Edinson Volquez at 2 years and $20 million was an excellent signing by the #Royals. He's been their best starter this season.

‘Easy Eddie’ put forth another solid effort on Wednesday, pitching into the 8th inning, going 7. 2 innings, giving up 8 hits and 1 run while walking 1 and striking out 8. Volquez figured out early that Pittsburgh was having a hard time hitting his slider and he took advantage of that factor. It’s scary to think how bad this rotation’s numbers would be if you threw out Volquez’s stats. He has been vital for this team, saving the bullpen with an effort that garnered him a 66 game score, one of his better scores of the year. Volquez still has his days where he struggles with his control, but the majority of the time he is on his game and would have to be a lock for a starting spot when/if the Royals reach the playoffs. I might not always agree with Dayton’s offensive signings, but pitching-wise he has been a pitching prophet these last two years.

There is so much more information to digest about this series. Let’s wander over to the news and notes sections of these three games against Pittsburgh:

Medlen was almost immediately thrown into action later that night, as he would relieve Yordano Ventura. Medlen went 3.1 innings, giving up 4 hits and 4 runs(including a home run) while walking none and striking out 4. Just looking at the line you wouldn’t be too impressed. But the bigger story is Medlen was able to return from a second Tommy John surgery with good velocity and his home run to Travis Ishikawa continued the struggle he had this year during his rehab starts when facing lefties. I thought for the most part Medlen looked good and was consistently throwing strikes. As of now Medlen will be the long man in the pen, but there is always a chance we will see him in the rotation in due time. Luckily, Medlen is just happy to be on the team:

Medlen says he's not in a position to care what role he has in the pen, just happy to be back. "I'm not worried about all that other stuff."

Even Ventura realized how awful his outing was:

Yordano Ventura after the game: “Obviously I am not feeling too good about what is going on. I know this club needs me." #Royals

The Royals would send Yordano down to AAA when they activated Jason Vargas before Tuesday’s game. But Ventura didn’t even get out of town…

There is a good chance that Vargas will not only miss the rest of this season, but also all of next season. If he does miss the 2016 season, there is one silver lining to this whole mess:

This also pushes up the need for another starting pitcher for the Royals, with names like Cueto, Gallardo and Price being bandied around. My guess is we see a lower level starter than that, more on the level of a Mike Leake or Aaron Harang. The one definite is that the Royals will need more pitching and need it soon.

Better than stealing home? A shot at a mortgage-free year with @QuickenLoans. http://t.co/LTUnWyVlpx #StealAHome pic.twitter.com/N0Rdfc5VbE

The squeeze bunt by #Royals Dyson @mrzoombiya and the score by Infante in the seventh against #Pirates. @KCStar pic.twitter.com/S10CLnhqNa

I am not the biggest fan of the bunt, but when done correctly I am all for it and think it can be a huge weapon. Dyson bunting is a huge weapon within itself and it was done to perfection on Wednesday. One thing that manager Ned Yost has done this season compared to early last year is his ability to put a player in a situation that plays to his strength and letting him help the ballclub with this positive aspect of their game. Both situations were almost tailor made for Dyson and shows that a player just needs to be put in a situation where he can succeed.

You get some neat names when you lower the qualifier to 100 AB pic.twitter.com/9DROgxnYKP

No doubt: Royals are the best team in AL http://t.co/SLqubv43FI

Lorenzo Cain is on pace to have a 9 WAR season. There have been just 22 such seasons by position players since the work stoppage in 1994.

I would have liked Ventura to stay in AAA for a couple starts & see what Lamb could do for a few. But Dayton didn't ask me. #Royals

Eric Hosmer has 9 home runs this season. That equals his home run total from all of 2014. #Royals

Mike Moustakas (KC): 3rd HR in his past 7 games

He had 3 HR in his previous 48 games combined

Perspective: The 2015 @Royals would have to lose every single game the rest of the year (including today) to match the 2005 @Royals record.

The Mike Moustakas 3-run homer on a 3-0 pitch. #Royals pic.twitter.com/n5E4XDVQxX

Things I didn't predict: Kendrys Morales is tied for the AL RBI lead.

Hmm. Maybe. Career OPS+ through age 27 was higher than Konerko's but lower than Hrbek's. https://t.co/X1U4JSGSUh

Another series down, another series won by the boys in blue. Ever since late September it has felt like we are watching a dream sequence of this Royals team and I am going to wake up and find out it was all a dream. That is how good they have played and how night and day it is to a lot of last year. The Royals now have a funky next couple of days. First, they will play a make-up game on Thursday against the Cardinals, then Houston rides into Kansas City for three games at Kauffman Stadium. Houston has acquired Scott Kazmir from Oakland and the Royals have had some problems against him this year, so I’m sure not looking forward to seeing him and Dallas Keuchel throw against Kansas City. Hopefully the Royals can show Houston the same hospitality that the Astros showed the Royals earlier this year in Houston. Now is not the time to pump the brakes on the train; let’s keep the win train rolling right through the weekend!