Wow! That’s all I can really say after the amazing come from behind victory the Kansas City Royals pulled off on Monday night against the Chicago White Sox. For 7 innings the Royals looked like a team that was feeling the pressure of contending. Hell, the last week this Royals team has looked like a team feeling the pressure, as they have played about as tight as a team collectively could play. So tight in fact that Ferris Bueller could describe it perfectly, just change Cameron to the Royals:

So only 12 games remain in the regular season(13 if you count the game against Cleveland from last month that will be resumed with the Royals behind in the 10th inning) with the Royals holding the second Wild Card in the American League and 1.5 games behind Detroit in the American League Central. So what does this team need to do to help assure they reach postseason? 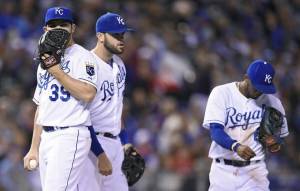 I briefly touched on this a moment ago, but this very well might be the most important thing these players can do over the next few weeks. By Sunday Kansas City had committed 20 errors over the previous 14 games. That is an astronomical number for a team that has been one of the best defensive units in the big leagues over the last two seasons. If those numbers weren’t glaring enough, they have looked just as tight on offense. Over the last 14 games this team is hitting a lowly .233 with an OBP of .286, a slugging percentage of .325 and a wRC+ of 71(when league  median is in the upper 90’s). Obviously the walk percentage is down as well, but that is the norm for this Royals team. Almost every facet of their game has played during this time span like they feel all of the pressure on their backs, and that causes teams to make mistakes and struggle in regular situations. Hopefully last night’s walk off win will loosen the team up and they can return to the style of play they incorporated for the greater part of August.

The one thing that has been ‘dead on’ the last few weeks is the starting pitching. James Shields(before last night) had 22.1 IP, 10 H, 1 R, 1 ER, 18 SO, 2 BB, 0.40 ERA over his previous three starts. Jeremy Guthrie(who has up and down over the last few months) threw a gem on Saturday night, giving up only 3 hits, 1 run and 1 walk over 8 innings. Yordano Ventura and Jason Vargas have been steady for the most part over the last few weeks and hopefully can continue that. The only real question mark with the starters is Danny Duffy. Duffy came out of his start on September 6th against the Yankees after only one pitch because of shoulder stiffness.  For the Royals to reach the postseason(and succeed there) they need Duffy to be healthy and on top his game. As of right now the plan is for Duffy to pitch later this week and hopefully will return to form in no time. If this happens the Royals will increase their chances of getting a spot in the playoffs and solidify the rest of the rotation.

This isn’t always an issue, but when the team is slumping it seems the weaknesses in the lineups that manager Ned Yost puts together are glaring. Take for instance continuing to bat Omar Infante in the second hole. Up until this weekend this was going on despite him hitting just .232 in the second half of the season with an OBP of .258. Most analysts and fans recognized this problem yet Yost insisted on him staying in that spot. Same goes for Salvador Perez, who was holding steady in the middle of the order despite hitting  just .243 over the last month and not taking a walk since July.  If those weren’t bad enough, once Eric Hosmer got off the DL, Billy Butler got about as much playing time as the Royals bat boy, this in spite of him hitting exceptionally well during Hosmer’s absence. The Royals don’t have a lot of pop in their lineup, so a must for them is to have a lineup that plays to their strengths. If that means batting Infante and Perez lower in the order, you do that. If that means picking and choosing when to play Butler(and [gasp] even sit Hosmer), then you do that. The Royals main weakness is their offense, so to put together a lineup that doesn’t play to their strengths, that is already putting this team in the hole. Yost needs to avoid this the next few weeks and go with the hot hand…and not just say that you are going with the hot hand even if you are not. That leads us to the next point…

4) Keep ‘Nervous Ned’ to a Minimum

I don’t want to spend a lot of time on this, since I have covered this ad nauseum over the last three years. But for those new to the party, Ned Yost does not handle adversity well. It has been shown time and time again, and it has reared it’s ugly head the last few weeks. Doesn’t matter if it is batting orders, or handling the relievers or his defined roles on the team; Yost can’t think outside of the box. The best thing for this Royals team is to score runs early, let the starters go at least 6 innings and then Yost can go to Kelvin Herrera, Wade Davis and Greg Holland in the 7th, 8th and 9th. The least amount of thinking for Yost, the better. Yost was fired around this exact time back in 2008 for Milwaukee for doing the same things he is doing now. If they can keep ‘Nervous Ned’ to a minimum, then the Royals have a chance to play October baseball for the first time in 29 years. 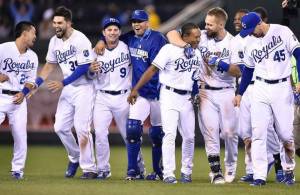 There is not much time left in the season so each game is going to feel like a pressure cooker until the Royals clinch a spot. Most of us Royals fans have never felt this kind of stress and it has made us all a bit on edge. If the Royals can do those 4 things listed above, they will defy the odds and make their first playoff appearance since 1985. If they aren’t able to keep those items in check, it could make for a very long winter. This is a team that has the talent to succeed, but there is always the human factor around the corner and it doesn’t follow any certain pattern. That human factor can also elevate a team and play above their talent. Right now the human factor has us all on pins and needles.