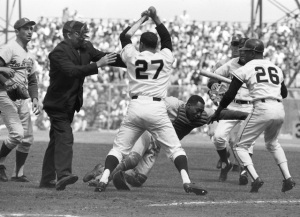 I became infatuated early on in life with baseball.  By the age of ten it was what my world revolved around(that and Star Wars) and I began finding out everything I could about the game, including it’s history. Many images blazed a trail in my mind early on, like the video clips of Babe Ruth running fast around the bases or Pete Rose’s headfirst slide. But when I read about Giants pitcher Juan Marichal hitting Dodgers catcher John Roseboro with a baseball bat, I couldn’t get the image out of my head. Things got so bad that the batter hit the catcher with a bat? Whoa! This just never happened in baseball, yet at one point things got heated enough that a man hit another man in the head with a baseball bat. I knew the Dodgers and Giants rivalry was heated, but this was another level. I never learned much of why this happened but I’ve always been curious. Thanks to John Rosengren we now know.

Rosengren spends a lot of the early portion of the book discussing both Marichal and Roseboro and the early portions of their life, both before baseball and early in their careers. The picture that is drawn is one of two different people; one grew up in the Dominican Republic, the other in Ohio. But as much as those locations couldn’t be farther apart, they both knew what it felt like to be treated differently because of the color of their skin. You learn that Marichal is a warm, gentle man who felt he was misunderstood a lot once he got to the United States. Roseboro’s family was one of only a few of color in Ashland, Ohio, but John didn’t deal with a lot of the racial prejudice that many faced around the country at that time. John excelled in sports in school but was also a quiet man who didn’t socialize a lot. As much as you want to learn about the fight and how and why it happened, learning about the two players involved helps give you a better feel about the incident and how this was just an isolated incident, not a pattern of anger or violence.

Maybe the most interesting part of the book is Marichal discussing some of the prejudice he encountered against Latinos in the game. Most of us are aware of the issues that African Americans encountered in baseball for the longest time, even after the racial barrier was crossed. The picture painted of was one of Latinos being taken advantage of by managers, owners and even Major League Baseball in general. A pitcher like Marichal, who at the time was very close to being the equal of the Dodgers Sandy Koufax, could never make close to the money Koufax was making. The language barrier was a big issue for many Latinos and in a lot of cases where Marichal was hurt or sick, the club just thought he was being lazy and didn’t want to “fight through it”. It is a real eye opener to realize that as much as we realize the biggest black eye on baseball throughout its history has been racial prejudice against African Americans, there was just as much prejudice going around for Latinos. The fact that both Marichal and Roseboro dealt with these issues while playing in the big leagues showed that these two men were more alike than either would have realized.

Now onto the fight. What you really get is that this was a perfect storm. Obviously the Giants and Dodgers playing each other means emotions are already heightened. Two teams, jockeying for position in a playoff push while already having quite a bit of dislike for each other is a recipe for disaster. I won’t give away what leads to the fight, but what I will say is that Marichal did not strike Roseboro out of anger. This fight might be the ugliest on a major league ball field in history and most of us can agree that something like this should never happen ever again. It’s interesting to hear how both sides felt after the incident and how the public and baseball felt. As much as the media wasn’t even close to invasive as it is now, there was still a very one-sided view of what happened, which still happens the majority of time today. The counter-effects of the fight were numerous and felt by both parties, which the author does a great job of relaying both and not taking a side either way. 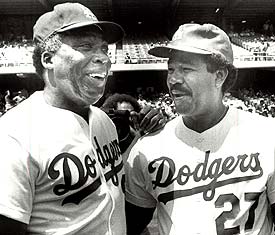 Over the years neither player was able to leave the incident behind them, as whenever either player was brought up, so was the fight. Time painted Marichal as the bad guy and Roseboro as just being in the wrong place at the wrong time. Over time Marichal would reach out to Roseboro, and the two men would even be able to bury the hatchet. For a number of years Marichal, despite having the numbers, wouldn’t be voted into the Hall of Fame, many citing the fight. This whole section of the book is a great view into the two former players relationship, as Roseboro feels the need to set the record straight and vouch for his friend, Marichal. Two men who at once were enemies on the field would grow a friendship that many former players never achieve, yet along two that were once at odds.

To read about not only how close Marichal and Roseboro became but also how close both families would become really pointed out how we all make mistakes and holding onto anger doesn’t hurt anyone but yourself. John Rosengren did a great job of focusing more on the human aspect of these two men than just what they were as ballplayers. By the end of the book you really feel like you know the two of them and that they were not only good players, but good human beings. If you are a baseball fan you will love all the baseball talk that is in the book. But this is not just a baseball book; this is a book about two people, from two different worlds. One incident connects these two players for life but do not let it define them. Juan Marichal spoke at John Roseboro’s funeral and probably sums up everything the best someone could:

“Johnny’s forgiving me was one of the best things that happened in my life,” he said. “I wish I could have had John Roseboro as my catcher.”

I highly recommend following John Rosengren on twitter and also going and purchasing the book here. This is a great read that I will be picking up again at some point.