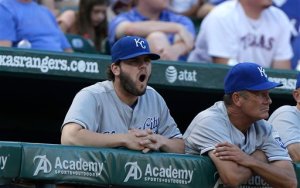 Dayton Moore strikes again this off-season, pulling off a trade of role players today with the acquisition of Danny Valencia from Baltimore for outfielder David Lough. On first glance, it looks as if Moore traded a player who didn’t really fit into the Royals plans in 2014, and turned him around for a guy who could be a backup infielder. But it goes a bit deeper than that. 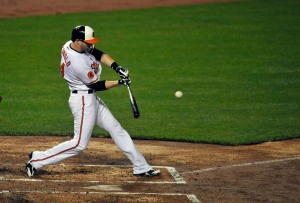 Valencia was once a prospect for the Minnesota Twins back in the day, but it didn’t take long for him to wear out his welcome. The Twins, after figuring out that Trevor Plouffe(PLOUFFE) could put up even better numbers than Valencia, traded Danny to Boston in August of 2012. Valencia was then traded to Baltimore just a few months later, where Buck Showalter figured out that he was a better role player than a regular. In fact, throughout his career, Valencia has struggled against righties but flat out massacred lefties:

When used in the proper context, Valencia’s value shot way up. In fact, this would probably be why the Royals were so interested in him. 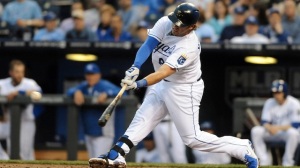 Mike Moustakas struggled in 2013. Like, “Jeff Francoeur is batting better than me” struggles. Moose’s first half last year was downright putrid. After coming off of a pretty good sophomore year in 2012, things seemed to be looking up for Moustakas. Sure, he suffered through a knee injury late that year, but he was healed and looked to grow on 2012. Instead, the bottom fell out. Every know and then we would see a glimmer of the Moustakas we thought he could be, but then he would fall back into another slump. He hit so many pop-ups last year that I started making up distance totals of all of them to determine just how much distance was accumulated and if it would wrap around ‘The K’. To make matters worse, Moose never got the hang of it against lefties:

To put it bluntly, Moustakas stunk in 2013, and it only seemed apparent that the long leash the team gave him last season wouldn’t carry over to 2014. It only seemed to make sense to give him some competition. 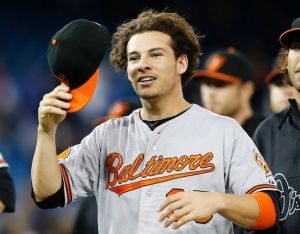 That would be where Valencia slides in. Moose can’t hit lefties. Valencia can’t seem to hit righties. Literally, this is a perfect platoon, and there is a good chance that is what will happen. But this is also a wake up call to Moose. Moustakas up to this point has probably been given the benefit of the doubt thanks to him being a first round draft pick. Most teams, and especially the Royals, give their top draft picks a longer leash than a normal pick. The Royals were also in a position to where they weren’t winning, so taking your time with letting a player grow wasn’t a problem. But the Royals are now in a position where they can be a contender, which means they can’t afford to have a third baseman that has an OPS of .651. So this trade is what you think it is; a message to Moose that if he falters next year, they already have his replacement handy. Will there be a battle for the position in Spring Training? Possible. If I had to guess though, it is Mike’s job to lose. Unless he just downright stinks up the joint come spring, I would bet he is in the starting lineup come Opening Day. The Royals are going to give him every opportunity to succeed. But if he struggles like he did this past season, Valencia can step in. 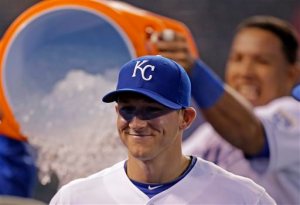 So what about David Lough? Well, there was a good chance that Lough wasn’t in the Royals plans in 2014. The outfield is set with Gordon, Cain and Aoki, and the Royals like having Jarrod Dyson on the bench.  Lough is out of options, and doesn’t have the power bat that Justin Maxwell possesses. So with that in mind, it made sense for Dayton Moore to see what Lough’s value was and see if he could swing a deal to bring someone in that would help the team more in 2014. With that, Dayton accomplished his goal. Look, I like Lough. I think he would be a great fourth outfielder, and he showed last year that he can play all over the outfield and was a good spot starter. But he will be 28 next month and most guys who don’t see regular playing time in the majors until late in their 20’s don’t have great careers. In all honesty, there is a good chance 2013 will be his peak. Even if not, the Royals had no spot for him, and Baltimore had a need. I hope Lough gets a chance to play quite a bit for the O’s, and I’ll be rooting for him. It’s sad to see him go, but baseball wise it makes sense. 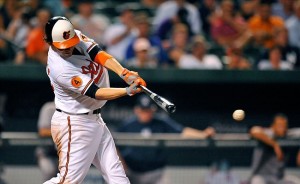 It’s hard for me to say this, but Moore has pulled off another good trade. This off-season he has realized how to recognize the strengths the Royals have and trade from that to pick up pieces for next year’s team. Valencia should be a solid bat off the bench, and a probable starter at third base against southpaws. The real value in the trade will be determined on how Moustakas reacts to a little bit of competition. If it causes him to step up his game, it is a win-win. Moose will have earned his keep at third while having Valencia be a solid bat with some pop. If Moose continues to struggle, the Royals at least have a guy who can fill the role and not be completely lost. But I have a feeling if Valencia accumulates more than 450 at bats, we have a problem. Time will tell, but looking at this deal right now I only see the Royals getting stronger. One more solid starter( maybe a #2) and this team can be a serious playoff contender. Work still needs to be done, Dayton, but things are looking up.