I was ALLLL ready to spend this time discussing the 2013 Kansas City Royals season, and how well they played, but pressing matters made me go a different direction. Wednesday night in Atlanta, sparks flew between a very bad team and a soon-to-be playoff team. In what can only be described as an ugly scene, the Milwaukee Brewers and Atlanta Braves threw punches over an unwritten baseball rule that wasn’t just broken, but smashed wide open. 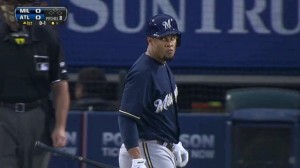 In the first inning, Carlos Gomez of the Brewers came up to face Braves pitcher Paul Maholm. Over the years Gomez has had his way with Maholm, and Maholm has hit Gomez at least twice in his career. To say these two probably don’t like each other would be an understatement. Back to the at bat…first pitch from Maholm and Gomez swings as if he is trying to knock in five runs with one swing. He then proceeds to stare down Maholm, which could be counted as the first thing Gomez did wrong. In fact, it wouldn’t be outside the unwritten rules of baseball for Maholm to turn around and nail him in the ribs. Trust me, if that had been Bob Gibson that Gomez stared down, he might get a little bit of sweet chin music. So Gomez finally stares back in and Maholm’s next pitch was killed by Gomez… 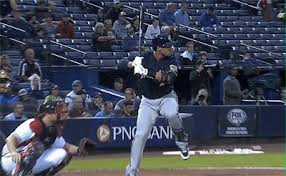 …and Gomez just stood and watched. Then started a slow walk. A slow walk that not even Babe Ruth should be able to get away with, let along one Carlos Gomez. If you listen in the background, you could even hear Braves catcher Brian McCann suggest to Gomez that he should start moving, yet in a very expletive manner:

So started the jaw-jacking. Gomez started yelling back at McCann. Braves first baseman Freddie Freeman had a few choice words for Gomez as he rounded first. Gomez kept trash talking as he rounded the bases, making what was already a bad situation downright ugly. By the time Gomez rounded third, McCann had moved about ten feet up of the plate, standing in the way of Gomez. What proceeded was more trash talking and eventually both dugouts emptied.

It also gave all the creative people on the internet the opportunity to look at all of the crazy faces of Carlos Gomez.

I guess at this point you can look at the developments one of two ways. One, you can be the person who says if the other team doesn’t want to see such antics play out then don’t give up the home run. There are those that agree with that and think that baseball’s unwritten rules are outdated. Or two, you are like me and believe this comes down to a matter of respect, or lack of respect in this case. 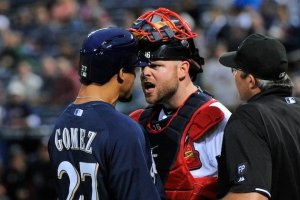 Baseball’s unwritten rule says that as a batter you don’t go out there and show up the other team. For years the unwritten rules have been used as a way to police matters on the field and keep a certain line of decorum. Some of these rules are outdated, but some are still there for a reason and help keep things from falling out of whack. What Gomez did was going way over the line. I understand Maholm and him have a long history against each other, and at this point probably don’t like each other. But that doesn’t excuse Gomez’s behavior.

This is going to sound a bit old school on my part, but there should be a level of respect out there between the batter and the pitcher. I’m not saying you have to like each other; hell, you can hate each others guts for all I care. But there needs to be a level of respect, and that seems to be lost just a bit every year. I don’t want to just blame hitters here, but there are a lot who go up to the plate and think they own it and the pitcher is just there to serve up a giant meatball. Hard for these batters to have a bunch of fear when they are allowed to go up there with so much armor that they look Robo Cop. The pitcher has just as much a right to pitch inside as the batter does to lean over the plate. But if you lean over the plate, crowding it, then you can’t be all up in arms when you get plunked. 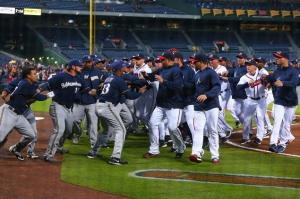 I wish there were more pitchers today like Bob Gibson, Don Drysdale and Pedro Martinez. None of those guys would have put up with Gomez’s crap and he would have been drilled. Instead pitchers are afraid of being ejected, as the umpires have taken away their power by controlling and overreacting to these actions instead of letting the players police themselves. Sure, there are times things get out of hand; just look at the Dodgers/Diamondbacks game from earlier in the year. But instead Gomez took Maholm hitting him earlier in the year as personal, despite the fact that nothing about that plate appearance made it seem as if it was intended in the first place.

I hope hitters have taken something away from this. If anything, they need to realize that not every time you are hit is it done on purpose. Sometimes a pitcher is just trying to throw inside and the ball gets away from them a bit. They are trying to get you out just as much as you are trying to get a hit against him. It’s a back and forth chess game, not an ego driven plate appearance. Hitters, it is not all about you. What it is about is respect, and it needs to come from both sides. If you don’t show the opposing team that respect, don’t expect any back…and don’t walk to first. You can watch the ball but you need to be at least jogging to first. If you don’t, well, don’t be surprised if the other team takes offense to it. Because if we learned anything this week, it’s that Brian McCann is your judge, jury and executioner.