Second base has been a black hole of talent for the Kansas City Royals these past four years. To be honest, we could probably go back farther, but for now let’s stick to the current regime. Ever since Chris Getz was acquired from the White Sox, the Royals have been in some sort of weird bromance with Getzie and subsequently left a hole at the position. Sure, Johnny Giavotella never stepped up to take over the position(and yes, the argument could be made that he was never given much of a chance to), and anyone else who stepped near the position didn’t really shine. The closest might have been Miguel Tejada, but alas, he was brought down by Bud Selig’s white men in the black suits. So when Emilio Bonifacio was acquired from Toronto on August 14th it seemed like just another middle infielder that wouldn’t do much but take up space and fill out a batting order. But something happened when Emilio actually got some playing time…he…he actually played pretty good. Good enough that he might be the Royals starting second baseman on Opening Day 2014.

When I first heard that Bonifacio could be a starter next year, I had mixed emotions. On one hand, he’s an upgrade over Getz, which at this point makes me happy. Hey, a guy can only put up with the bunting, and the little things, and the inability to hit the ball with authority so long before you just want it to stop. I know, I know; Bonifacio does a lot of those things. Main difference is he does them good, which I can live with. That’s actually my first thought: “I can live with him at second.” My next thought was that he is more valuable as a super utility guy. In fact, I still feel that way. Bonifacio is able to play second, short and third in the infield, and all three outfield positions. More and more, a guy like that is invaluable to a team, especially a team who has dreams of playoffs floating in their fountains. So what should the Royals do with Emilio?

Looking at his numbers this year makes you wonder if he would be able to keep those numbers up if continuing to play full time. Thirty nine games is a small sample size, but his numbers he has put up so far are very comparable to his career year, which was 2011 in Florida. In fact, that year he would play in almost all of the Marlins games, hitting . 296 with a .753 OPS and 40 stolen bases. He’s never going to be a big power guy but he does get quite a few extra base hits, as his 222 total bases attest to. So far with Kansas City he has hit . 290, with a .717 OPS and 15 stolen bases in 17 tries. He does strike out a bit more than I would like, but hey, anymore everyone strikes out a ton and no one bats an eye. If he could keep up these numbers for a whole year consistently(and really that is the key word), then he would be a great fit at second next year.

But let’s say the Royals like having him as a super sub, someone who plays almost as much as a regular but bounces from position to position. I personally feel he has more value here, especially if Mike Moustakas continues to struggle or if any regular goes down for a long period of time. The Royals could go out this winter and look for a younger second baseman that could start(Logan Forsythe, anyone?). This would free Bonifacio up to bounce around and contribute to the team in a various array of ways. Need Bonifacio to give Alcides Escobar a day off? There ya go. Need him to pinch run late in the game for Billy Butler? At your service, sir. Want him to come in as a defensive replacement in the outfield? Aye Aye, Captain! He could also be insurance if the second baseman you acquire sucks pond water and Getzie’s all over the place. He could be described as the most valuable player on the team if they go this way, just in the different ways he could be used. The last few years the Royals have had a miniscule bench, and having someone like Bonifacio who could literally play everywhere could be a secret weapon in 2014. 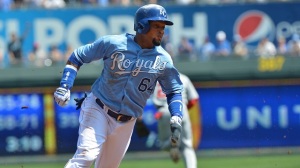 So which of these will actually happen? In my mind, Bonifacio ends up being the starter on Opening Day 2014. I will say I don’t think that guarantees he will still be in that spot by the end of the year. There is a good chance that Dayton Moore will go out and try to acquire another second baseman or give someone like Christian Colon a shot at the job and move Bonifacio to the utility spot. The best part of all of this is that for the first time in a number of years, the Royals actually have options and a bit of depth. 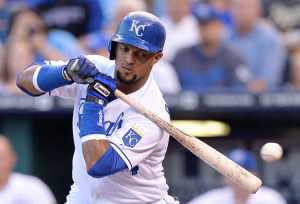 Without a doubt it’s clear to see that acquiring Emilio has been a great pickup by Moore and one that has not only paid off on the field, but also in the clubhouse. His energy at the top of the order has helped the Royals get back on a hot streak in September and even stuck them in a pennant race for awhile. All this for a guy picked up off waivers from a fledgling Toronto ball club. I can easily see Bonifacio staying in a Royals uniform for a few years, and hopefully he will still be here when his brother, Jorge, makes it to Kansas City. No matter which direction the Royals go with Emilio, I am comfortable with either choice. For the first time in a long time, I’m okay with how second base looks for Kansas City. It’s not Frank White, but those shoes aren’t easy to fill. For now, Royals fans everywhere should do this when Bonifacio steps up to the dish: