Back when the Kansas City Royals signed Jeff Francoeur in December of 2010, the one positive of the signing was that Frenchy was a good clubhouse guy. I figured even if he didn’t hit(which at that point he really hadn’t for years) he could at least be a good influence on the younger players in the Royals clubhouse. After years of having clubhouse cancer’s like Jose Guillen and Zack Greinke, it would at least be nice to know there would be a guy that could show everyone the correct way to handle yourself. I honestly believe that having good clubhouse chemistry is an underrated part of a baseball team and can push a team farther than their abilities. Just look at the Oakland A’s this season. For the most part, it has seemed that Francoeur has been good for this Royals team the past two years. But after last week, I’m thinking he might not be a guy the rest of the team should emulate.

To say Francoeur had a bad season might be an understatement. Jeff pulled off one of the worst seasons by a regular player in baseball history, especially for someone who played in all but 14 games. Francoeur slid in almost every category from 2011, but the one stat that really stands out is the 49 RBI’s. For a guy who hit in the 5th spot most of the year, that number is atrocious. Add in a .235 average and a WAR of -2.7 and you can see why Manager Ned Yost penciling Frenchy into the lineup day after day really hurt this Royals team this year. In late July/early August, Yost started moving Francoeur down in the lineup, as he just wasn’t driving in runs,when his main job in the 5th spot in the order is to drive runners in. But this fact is also why Frenchy might not be the clubhouse guy we thought he was.

Last week, the Royals fired hitting coach Kevin Seitzer, laying the blame of the under performing Royals offense on his shoulders. That same day, Seitzer did an interview with 810 WHB radio in Kansas City. His interview is here: Seitzer Interview . In the interview, Seitzer revealed that back in August, Frenchy went and complained to Kevin that the reason he wasn’t driving in many runs this year was because Royals All Star Billy Butler was batting ahead of him and clogging up the bases, making it hard for Frenchy to knock him in. Because of this, Jeff said he was overcompensating by swinging for the fences, trying to get Butler in from first. Nevermind that Frenchy wasn’t making much contact this season or that in the 26 doubles he had this year, Butler was only on base for 2 of them. God forbid facts get in the way of a good argument. Nope, Frenchy in effect was throwing the team’s best player under the bus. For a guy who is supposed to be the clubhouse leader, this isn’t a trait becoming of someone in that position. In that position, you are to be a shining example for everyone to look up to. Instead, he seems more concerned about personal numbers than the fact that he needed to look in the mirror and see how he was hurting the team with his poor play.

After doing some research, maybe we should have seen this coming. Maybe Frenchy wasn’t the stand up guy we thought he was. Exhibit A: Francoeur Whines. Or Exhibit B: More Whining. The point is that if you are a character guy, a guy who is a clubhouse leader, you lead by example. You don’t make excuses, you don’t blame other people or situations, and you definitely don’t throw your team’s best player under the bus. Look, being a professional baseball player means you do have some sort of ego. It is almost impossible to not have one, and in some ways it can help you. But if you are a leader, you worry about what is best for the team and that is it. Nothing more, nothing less. Whining that you aren’t getting enough playing time or not driving in enough runs isn’t something a leader does. Your case isn’t helped by hitting .235 and only driving in 49 runs. 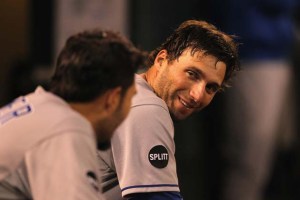 So should Jeff Francoeur remain the clubhouse leader of the Royals? Personally, I don’t think so. I’m sure Frenchy is a great guy to be around, and sure he brings a lot of positives to this team. But there is just no excuse for blaming your star player when you can’t carry your own weight on the field. Up until all this happened, I was ok with Francoeur being back in 2013 and being a mentor to future Right Fielder Wil Myers. Now, I wonder if that is such a good idea. The last thing we need is Frenchy telling Wil that he needs to swing from the heels and swing at everything thrown at him, or just teach any of Francoeur’s many bad habits. At this point, I just can’t trust that Frenchy will do the right thing.