Ask any player out on the free agent market this winter what they covet the most and a good majority will say a multi-year contract. Sure, they won’t turn their nose up to the wads of cash thrown their way, but signing a new deal for an extended period is the kind of stability players dream of. The Royals have set their sights on re-signing first baseman Eric Hosmer and it’s hard to fathom that happening without Kansas City committing to a deal that is at least four years in length (and probably more). But history has shown that might not bode well for the Royals.

The most infamous long-term contracts in Royals history goes back to 1985 and the “lifetime contracts” . George Brett, Dan Quisenberry and Willie Wilson were the recipients of those deals that appeared at the time to be solid commitments for a perennial contender. But those deals would fall apart quickly, with Quisenberry being released in July of 1988 while Wilson fought off injuries and saw his offensive production wane before leaving after the 1990 season. While in theory these contracts appeared to lock in a chunk of the Kansas City nucleus in the mid 1980’s,  the reality was that the Royals overpaid for players during a period where collusion controlled the free agent market and salaries.

The Royals would close out the 1980’s with one of the worst free agent signings in club history, signing Mark Davis (the 1989 Cy Young award winner) to a four-year, $13 million dollar deal. That deal would go sour almost instantly, as Davis would struggle and lose his closers role to future Royals Hall of Famer Jeff Montgomery. Davis would be dealt to Atlanta in July of 1992 and put up some ugly numbers during his short stint in Kansas City: 167.2 innings, a 5.31 ERA, 5.01 FIP and an ERA+ of 76.

We all remember Mike Sweeney’s $55 million dollar deal he signed after the 2002 season. Sweeney was the one who decided to stay, while watching Damon, Dye and Beltran be shipped off. Sweeney was coming off his career year in Kansas City, posting the highest bWAR and OPS+ of his career, among other career highs that season. Sweeney’s deal kept him in Kansas City through 2007 but injuries would take their toll on him as early as 2003. While the offensive production was still there for the first couple years of the contract, his time on the field diminished and by 2006 he had essentially become a shell of his former self.

Not every long-term contract handed out by the Royals would miss the mark. One could argue that George Brett’s lifetime contract paid off in spades, as he would continue to be a hitting machine until his age 38 season, well past the normal age of regression for a major league hitter. Zack Greinke’s four-year deal that was signed in 2009 would produce a Cy Young season, but Greinke would be dealt before the contract had run its course. One could even make the argument for David Cone’s three-year deal that he signed with Kansas City before the 1993 season being a success, but for the sake of argument you could also contend that a contract of three years really isn’t “long-term” by definition. 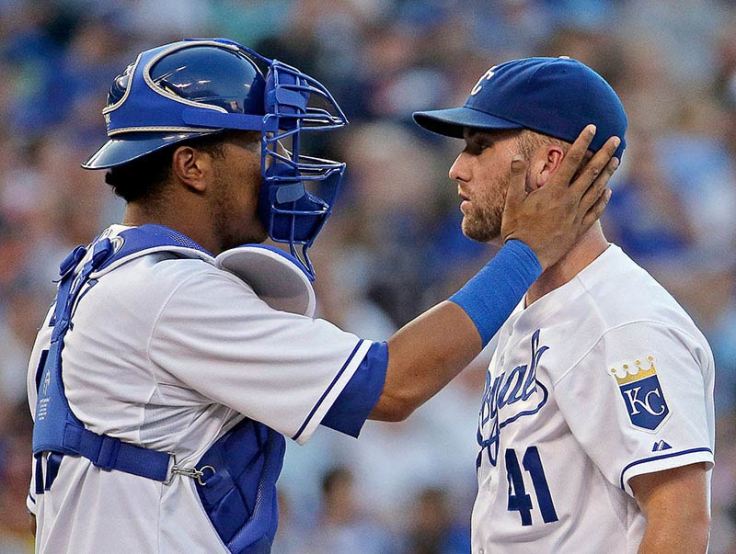 That leads us to the modern-day Royals, which currently host a number of extended relationships. Ian Kennedy is locked in for another three seasons in Kansas City and has been a mixed bag during his first two seasons as a Royal (one good season, one bad season). Salvador Perez will be entering year two of a five-year extension in 2018 and while Salvy should be entering his prime, there have to be some concerns about the amount of games (and innings) he has caught in his major league career and the wear and tear that goes with it. Danny Duffy will also be in the second year of a five-year extension this upcoming season and has dealt with a wide array of injuries throughout his career as well as a DUI arrest just last summer.

Then there is the Royals contract with the most scorn, that of Alex Gordon. His four-year contract originally appeared on the surface to be a calculated move. Gordon had been a consistent run producer and defensive wizard for the previous five seasons and while he was entering his regression years, the slope appeared lessened by his crazy work ethic and ability to stay healthy. Gordon had appeared in at least 150 games in every season between 2011 and 2014, while his groin strain in 2015 looked to be an outlier. But injuries hindered his 2016 campaign and offensively he hasn’t looked the same for two years now. Situations like Gordon’s are why teams become hesitant to commit to a long-term contract.

This all leads back to the Eric Hosmer situation and how the Royals should deal with it. On one hand, you have a player entering his age 28 season, coming off of a career best season, in what should be the prime of his career. On the other hand, Hosmer before 2017 was an inconsistent offensive player and has a propensity to hit the ball on the ground at an alarming rate. While the Royals have not had the best of luck when it comes to contracts of more than four years, we are all aware that every situation (and player) is different. Signing any player for 4+ years is a gamble within itself. The question the Royals have to ask is if the risk is bigger or smaller than the reward when rolling the dice on their future.