The script was supposed to play out different from this. Here it was, the final contractual season for most of the core group of players who brought a championship back to Kansas City, and rather than ending with a bang and one final playoff run, it ended with a whimper. While the Royals showed glints of their former greatness throughout the 2017 season, at the end of the day this group couldn’t overcome inconsistent hitting, a human bullpen and a number of injuries that left the team limping into the final month. This was supposed to be the final run, one last hurrah, the final countdown or any other cliché that the sports media likes to toss out there. As the four key free agents to be were taken out of the ballgame on Sunday, it was hard not to wonder what might have been. I was part of the optimistic bunch this spring, feeling that if any team could overcome obstacles it was this one. But two factors hurt my thinking: one, I was counting on this team to stay healthy for the most part and two, that a large chunk of the players would post career seasons. While a number of Royals did post peak seasons, they also saw a few that were plummeting. But the health of key members of the lineup and a few notables on the pitching staff really put a monkey wrench on the team’s hopes and dreams and left us with their first below .500 season since 2012 and nothing left to do but conjure up our memories and say goodbye to one of the greatest era’s in Royals history. 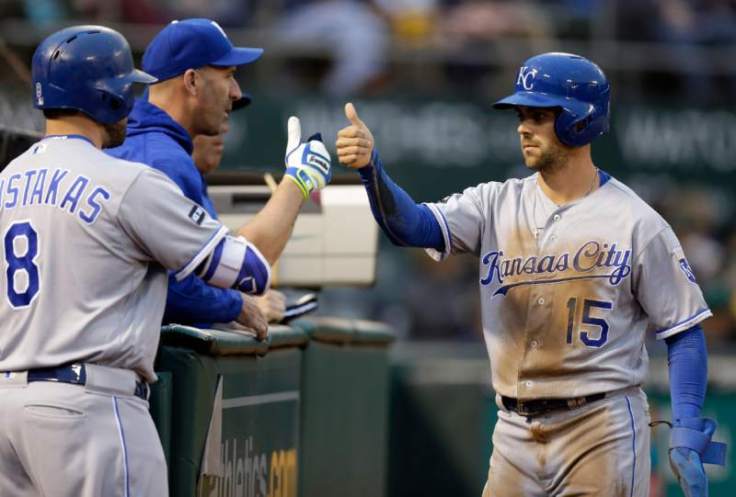 But let’s start with what went right for the Royals this year. For one, the team saw a plethora of peak offensive seasons from their regulars. Eric Hosmer posted the most consistent season of his career, as he put up career highs in batting average, on-base percentage, slugging, weighted runs created plus, wins above replacement, walk rate and tying his career high in home runs. The biggest knock on Hosmer (besides his inconsistency) was his ground ball rate, which was first in the AL in 2016 for qualified batters. His ground ball rate was still really high for a player of his caliber (55.6%) but he countered that with a much improved line drive rate (up to 22.2%) while pulling the ball a decent amount less (down to 31.1%, compared to 36. 1% in 2016). But it wasn’t just Hos who should be applauded for his work with the stick. Mike Moustakas broke the 32 year single season home run record for Kansas City by hitting 38 home runs, breaking the mark of 36 held by Steve Balboni since 1985. Lorenzo Cain tied for the team lead in wins above replacement (with Hosmer) at 4.1 fWAR and was as consistent as they come throughout the entire campaign. Jason Vargas had a stellar first half of the season, posting a 1.15 WHIP, 3.12 K/BB ratio while batters slugged at a .373 rate. Vargas would earn a spot on the All-Star team for his efforts, but saw his numbers balloon in the second half of the season. Mike Minor wrapped up his first full season as a reliever with a 2.55 ERA, 2.62 FIP, and 2.1 fWAR. His season led to a lot of discussion in September about the possibility of him returning to Kansas City next year in the closers role.The most surprising part of the 2017 season though was the production of Whit Merrifield, who not only earned himself the second base job despite starting the year in AAA, but would hit .288/.324/.460 with 19 home runs, 78 RBI’s, 3.1 fWAR and lead the American League in stolen bases with 34. For a guy who was regarded as just a utility player and was even left off the 40 man roster just a few years ago, Whit has worked himself into a starting spot in 2018 and has received support as one of the top second baseman in the American League. But while these players proved their worth, a number of Royals struggled throughout 2017.

Top of the list for disappointments was Alex Gordon. Gordon had the worst offensive season of his career, posting a line of .208/.293/.315 with only 9 home runs, 45 RBI’s, a career worst wRC+ of 62 and an even fWAR of 0.0. The one positive for Gordon was his September, where he hit . 250/.337/.452 and a wRC+ of 107 for the month, which were all bests for any single month in the season. The Royals had him start focusing on hitting the ball the other way, which has always been a strength for him throughout his career. Gordon might have to shift what type of hitter he is moving forward, as the power numbers might just be a sign of regression and age, but if Gordon can continue to play great defense and reinvent himself as a hitter that focuses on just getting on base ( and Gordon has posted good walk totals over his career) he can still be a valuable part of the team rather than a liability. But Gordon wasn’t the only player who struggled: Brandon Moss hit .207/.279/.428 with 22 home runs, 50 RBI’s and a wRC+ of 84 in his first season in Kansas City. Alcides Escobar was almost a ghost in the first half of the season, posting a line  of .226/.242/.306 and a wRC+ of 39 (league average is 100). Escobar was able to pick it up in the second half of the season, hitting .282/.309/.424 with a wRC+ of 90 and might have even earned himself a new contract this offseason. Kelvin Herrera took over the closers role and struggled with it, tossing a 4.25 ERA, 21.6% K rate (his lowest since 2014), 70.2% left on base percentage (the lowest of his career) and just 0.1 fWAR. Herrera’s role in 2018 is probably up in the air and could be determined in spring training.

The Royals also struggled as a group from time to time during the campaign. Remember that whole scoreless streak in August? The Royals went 45 innings  without scoring a run and no doubt probably helped push the team farther and farther away from a playoff spot during that span. The offense as a whole just wasn’t great, finishing 15th in OBP and RBI’s, 14th in wRC+ and K%, 13th in wOBA, runs and ISO, 12th in WAR, 11th in slugging, home runs and BABIP. So while we did see more long balls this year from the Royals, the fact this team isn’t patient and tends to have a ‘swing away’ mentality lead to many a slump and caused them to be a very streaky bunch. The pitching, while better was mostly in the middle of the pack on the American League, but the starters saw a bit more of a decline as the season progressed. Kansas City’s starting pitching finished 12th in xFIP, ERA, LOB% and 11th in WHIP. Injuries to Danny Duffy and Nathan Karns hurt the pitching and led them to starting a number of pitchers who either weren’t ready (Eric Skoglund, Luke Farrell) or shouldn’t even have been in that situation (Onelki Garcia).

The good news is a couple of rookies showed themselves to be keepers this year and will almost assure them a spot on the roster when the Royals break camp next spring. Jake Junis threw 98.1 innings for Kansas City this year, accumulating a 4.30 ERA, 4.55 FIP, 19% K rate, 1.28 WHIP and 0.9 fWAR. Junis proved to be one of the most reliable starters in the Royals rotation and if the team had made the playoffs he would have been an easy choice for the rotation in October. Junis started throwing his slider more as the season progressed and it proved to be a killer pitch, as he threw it on average about 10 MPH slower than his fastball, leaving batters off-balance whenever he threw it. Jorge Bonifacio also put himself into the conversation in 2018, hitting .255/.320/.432 with 17 home runs and 40 RBI’s, a wRC+ of 99 and a fWAR of 0.9. Bonifacio saw his playing time cut once Melky Cabrera was acquired but it felt more like manager Ned Yost had more trust in his veterans and liked having Gordon’s defense in left more than needing Boni’s bat in the lineup. I would expect Jorge to play a lot of right field next year, although the team also has Jorge Soler waiting in the wings and they definitely didn’t acquire him from Chicago to sit on the bench. There was one more rookie who showed some promise this year, and that was Kevin McCarthy. McCarthy threw 45 innings in 2017, putting up a 3.20 ERA, 3.98 FIP,  and a 13.8% K rate. Maybe the most impressive part of his game was that he only allowed a hard hit rate of 26.3% and proved to be a clutch performer, posting a 0.30 WPA and 0.45 CLUTCH. While the team will be bringing back a number of their relievers for the upcoming season, one would have to think McCarthy could see a growing role in the Kansas City pen next year.

So with expectations so high on this Kansas City Royals team, at the end of the day it just felt like this team was just not on the same level of talent of both the 2014 and 2015 teams. This team just couldn’t overcome injuries to guys like Salvy, Duffy and Moose and didn’t have the depth of talent in the organization that was there in years past. What this season did teach me was to hold on to the memories of those championship teams and not just because there will be a change in 2018. You hold on to those moments because I don’t know if we see another Kansas City team like this one for a very long time. I always held on to the 1985 squad, since that was the first team that made me fall in love with baseball and they were the only Royals team to win the World Series, despite better Royals teams back in the late 1970’s. These players eclipsed the ones before them in that they were able to overcome massive odds and bring winning back to Kansas City. The 2017 roster had talent and potential, but alas they just weren’t quite on par with the teams that preceded them. So what happens next? There are apparently two streams of thought within the front office…one is where the team starts to rebuild and works more on development than contending. The other? Whether you believe it or not, the Royals higher up brass feel that if they can re-sign Eric Hosmer, they might be able to also sign either Cain or Moustakas. This theory would involve a number of chips to fall their way and would also mean a shuffling of a number of high-priced veterans from their roster, but it is possible. I will leave you with this quote from Dayton Moore from just the other day:

“I think there’s some other things that we’d like to execute if possible — see what happens with our free agents. Everybody assumes that we are just going to just get blown away in free agency, and we don’t have a chance. They may be right, but I think everybody felt that way about Alex Gordon at the time. That fell back to us. You just never really know.”

While I fully expect this team to lose most if not all of their key free agents this winter, I am also aware that the pull of Kansas City and what it means to these guys could be greater than we think. Logic says the curtain has fallen and we have seen this story play itself completely out. But I’ve also learned to ‘Trust the Process’ and trust Moore more than distrust him. It would be a major coup to pull off, but maybe, just maybe…