Everyone who isn’t living underneath a rock knows that 2017 is a make or break year for the Kansas City Royals, as a large chunk of their world championship nucleus will become free agents at the end of the season. As of right now, Alcides Escobar, Eric Hosmer, Lorenzo Cain and Mike Moustakas could all be wearing different uniforms at this point next year. The common thought has been that the Royals won’t be able to keep everyone and more than likely 3/4 of these players won’t be re-signed. The belief has also been that Eric Hosmer would be the hardest to bring back, as he and his agent, Scott Boras, would be asking for the moon and more, which for the Royals would be almost impossible. But it now appears as if Hosmer is numero uno on their list, as the two sides are already discussing an extension  while no discussions have begun for either Cain or Moustakas. It appears that Kansas City wants to keep Hosmer a Royal, but honestly, they shouldn’t. 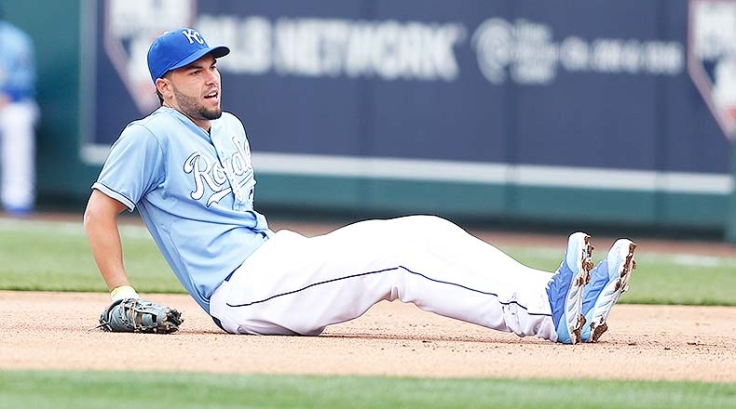 Let’s start with the positives when it comes to Hosmer. Hosmer is a 3-time Gold Glove winner, All-Star MVP and has driven in 29 runs in the playoffs, most of them big hits to help the Royals as they ascended to back-to-back World Series appearances. Hosmer has posted a career line of .277/.335/.428 in his six-year career, which is respectable but very average. Hosmer saw an uptick in his home run totals in 2016, but his overall slugging took  a bit of a hit. The biggest thing when it comes to Hosmer is the fact that he is entering his age 27 season, as many believe he has yet to reach his peak and more than likely whomever signs him this winter will end up with his best years, conceivably.

If you noticed, a lot of the positives associated with him center around what he ‘could’ do. It feels a bit weird to me to think a player entering his 7th big league season is still being waited on to reach his potential, or that the numbers tell a different story than what most people feel about Hosmer off of the ‘eye test’. If you listen to the national media, they have some heavy love for Hosmer and in some ways I see it. Here is a guy who is young and charming, has had success on the national stage in both the playoffs and All-Star Game and is a fun interview. For many, this is the Hosmer they know and for many it is why they believe him to be the focal point of Kansas City’s offense. But the truth lies somewhere else and to many of us who follow this team religiously, it is a big reason why we believe the Royals should not even entertain negotiations.

2016 is probably the perfect example of what kind of player Eric Hosmer can really be. I wrote in great detail about his struggles last summer and will revisit the two sides of a season that could (should) have been a career year for him. First, lets look at the splits of his year, as it is the best personification of 2016. In the first half, Hosmer looked like the MVP caliber player we’ve all thought he could be, racking up a line of .299/.355/.476 with 13 home runs, 49 RBI’s and an OPS+ of 118. Hosmer, without a doubt, earned that starting first base spot in the All-Star Game and even just an average second half would have put him at career best numbers. But his second half could have taken place in a horror movie, as he put up scary bad numbers: .225/.296/.380 with 12 home runs and 55 RBI’s and an OPS+ of 78. It was very obvious that Hosmer was trying to pull the ball much more in the second half and while his home run and RBI totals are on par with the first half, his other numbers took a giant dip. When trying to figure out why his slugging numbers declined, it is easy to see that while his dinger total was up, his doubles took a bit of a dive, as he hit only 6 doubles the entire second half of the season. To be honest, Hosmer’s season started to decline in June, as his numbers that month were down from the first two months of the season: .257/.350/.366 with 2 home runs, 13 RBI’s and an OPS+ of 91. 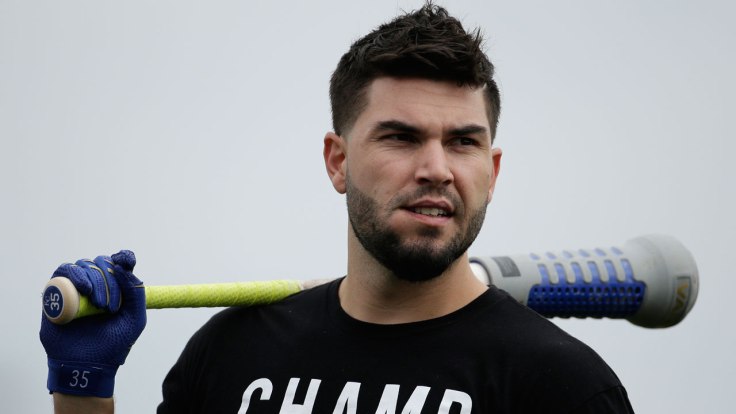 When I looked at his struggles last summer, I noticed a change in his approach at the plate, preparing for the pitch. Hosmer went from a toe tap that seemed to steady his body and cause less movement to a high, exaggerated leg kick that caused much more movement as the pitch was delivered. While the leg kick would sometimes help him deliver more power, it also seemed to throw his body out of balance from time to time. The concern with that was a lack of consistency, which has become a staple of Hosmer’s major league career. In looking back last year at his slumps, it became more and more evident that Hosmer is very inconsistent when it comes to his production. In fact, when looking back through his career, almost every year saw him run into a long cold stretch at some point in each season where he produced very little offense. Now, all players go through slumps and it is rare to find a player who can be consistent throughout an entire season. But Hosmer doesn’t just slump; he looks lost for 4-6 weeks at a time. The biggest concern is his ability to adjust, which he never seemed to do in the second half of 2016. Pitchers started throwing him more breaking balls starting in May: 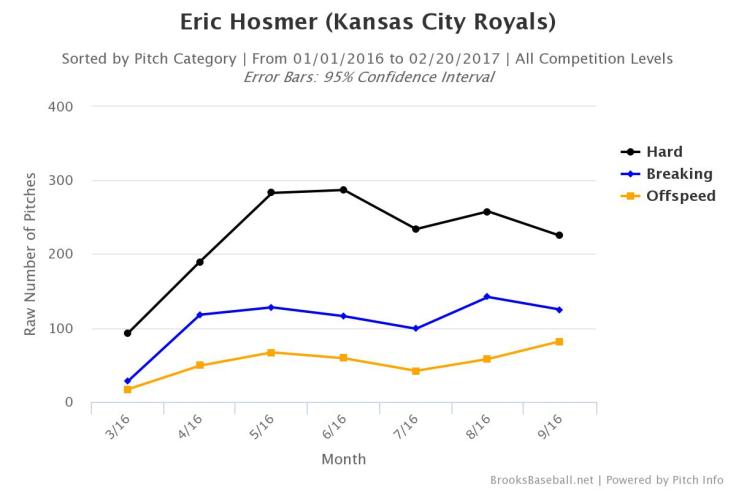 It is very obvious that pitchers adjusted to Hosmer and threw less and less fastballs to him while giving him a steady diet of breaking and off-speed pitches through the rest of the year. If the Royals locked Hosmer up to a long-term deal, I would worry that these struggles would continue and it is hard to justify him being in the middle of the Kansas City order when he stumbles into another lull.

The other concern with Hosmer is his inability to elevate the ball. In 2016, Hosmer led all qualified batters in baseball with a 58.9% groundball rate. In fact, throughout his 6 year career, his lowest rate has been 49.7% in his rookie season. In comparison, Mike Trout’s highest groundball rate is 44% in his rookie season. Now, no one expects Hosmer to be Trout (seriously, there is only one Mike Trout) but it proves the point I am trying to make: for Hosmer to be considered an elite player, he needs to hit the ball in the air more and less on the ground. Hosmer saw a major decrease in his line drive rate last year (23.6% to 16.5%) and a philosophy of more line drives and less ground balls would be a recipe of success for him. Sadly, I don’t know if that is possible, since he has averaged a 53% groundball rate through the first six years. For him to see a change, it is going to have to be a complete mental change-up to what he has been doing up to this point. 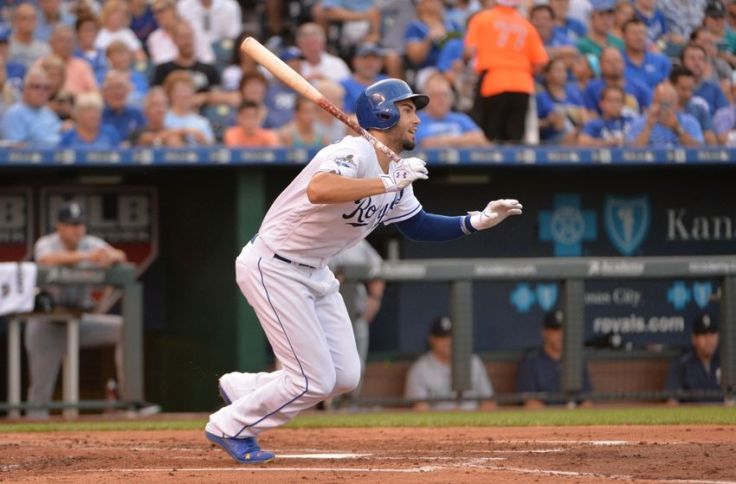 So how serious is Kansas City about getting Hosmer locked up? It appears to be serious:

“We as an organization have a strong desire to extend Eric,” Moore said. “We’re confident in his desire to be here in Kansas City. As with him and all our players, we’ll work as hard as we can to execute a deal.”

The issue could very well be length of contract, as it appears as if Hosmer is asking for a ten-year deal:

Hosmer isn’t nearly as accomplished offensively as either of those players was, but the Royals anticipate that he will seek a 10-year deal, knowing that a number of high-revenue clubs — including the Red Sox, Mets and Phillies — could seek a first baseman next off-season.

I don’t know about you, but a ten-year deal just feels like the recipe for disaster. I firmly believe no player is worth that long of a deal and definitely not Eric Hosmer. 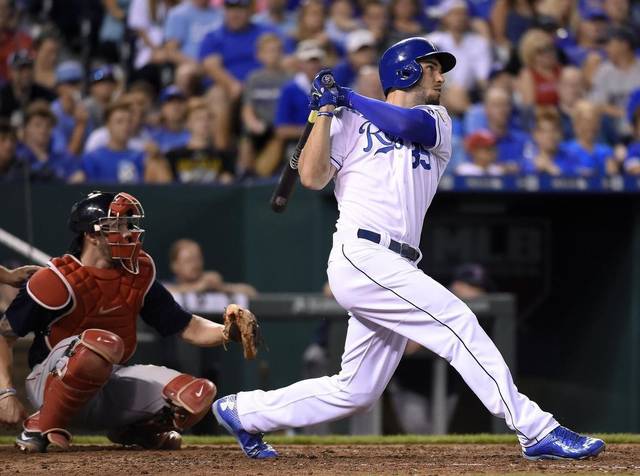 Years ago, the Royals locked up another first baseman, Mike Sweeney, to what would eventually be a five-year deal that seemed a positive for the team at the time. Sweeney was a year older than Hosmer (he will be entering his age 28 season in 2018) at the time, and by the end of that deal, injuries had turned Sweeney into a shell of his former self. Go look at the Joe Mauer deal, or Prince Fielder, or any other long-term deal for a first baseman; outside of maybe a Joey Votto, most have not panned out. While Hosmer shows the ability to possibly be a major offensive contributor, there is a feeling that what we have seen these last few years is what we would end up with. When adding up the length of the deal as well as the money that would be involved (and there is no way his deal wouldn’t be a pricey one for Kansas City), it would make more sense for the Royals to spend their money elsewhere. Hosmer reminds me of that shiny novelty item you find while you have some spare coin in your pocket. Sure, it looks nice and shiny and you can already imagine what all you could do with it…but…after awhile you wonder why you wasted your money on something you won’t ever use again. So you end up trying to sell it on ebay and hope you can at least salvage 1/3 of what you initially paid for it. While some Royals fans would love to see Hos locked up long-term, I tend to think the deal would be a regret within just a few short years. Call me crazy, but the Royals could do better than keeping Hosmer in the fold. I’ll go a step further-I feel he is overrated. If Kansas City is serious about locking up anyone who could be gone after this season, all they have to do is look across the diamond. There is a third baseman who feels like a perfect fit for this team and has shown improvement over the years. That would be my choice, but I’m not the GM. By the end of Spring Training we should have our answer, as Hosmer has said he will negotiate until the season starts and if nothing happens by then he will take his chances in free agency. I tend to think no news before Opening Day is good news; Hosmer is not the savior Kansas City needs.

3 thoughts on “Why the Royals Should Let Hosmer Go”