Well, they did it. After much discussion and even the tease of a deal on Saturday night, the Royals pulled the trigger on strengthening their rotation, acquiring Johnny Cueto from the Cincinnati Reds for minor leaguers Brandon Finnegan, John Lamb, and Cody Reed, all left-handed pitchers. The Royals now have a legitimate ace for the rotation and have more than likely increased their odds of not only reaching the playoffs this year, but possibly even the World Series. The fact that Kansas City has the best record in the American League without Cueto makes one wonder just how high this team can soar. So now that the deal is official, the question remains: was this a smart trade by Royals GM Dayton Moore? I think so and will explain why.

Let’s start with Cueto. The Royals have acquired one of the top starters in all of baseball since 2011:

What will Johnny Cueto mean to the #Royals? They're 11th in the AL in rotation ERA with the fewest innings pitched.

Outside of the great work that Edinson Volquez has done for 3/4 of the season, the rest have been less than reliable. Yordano Ventura has encountered the ‘Sophomore Slump’, Danny Duffy has dealt with injuries and control issues and Jeremy Guthrie has finally come back down to earth. Chris Young has been a great fill in for most of the season, but the Royals coaching staff have long discussed him returning to the bullpen and Jason Vargas is done for the year as he will have the dreaded Tommy John surgery. All that being said, there have been some glimmer’s of hope as of late. Duffy has looked more like he did in 2014, his breakthrough season, and seems to be solidifying his place in the rotation. Ventura pitched great on Sunday and there is hope it is a return to form for the youngster rather than the outlier of his starts. Adding Cueto to this group can only help this Royals team and there will be two notable differences he will realize very quickly:

As well as Cueto has pitched so far this season(2.62 ERA, 145 ERA+, 3.12 FIP and 0.934 WHIP) just imagine how he will do with the best defense in the AL and in a ballpark like Kauffman Stadium? One would think his numbers would only improve from where they are and it leaves only one other question: is he healthy? There has been some concern about Cueto’s health this season, but apparently Royals management feels comfortable with it:

The #Royals medical staff felt really good about Johnny Cueto's health. Dayton Moore: “We don’t have any issues there.”

So Cueto is a big upgrade to what has been a struggling rotation. What about the three pitchers Cincinnati acquired? 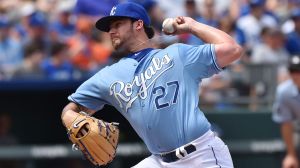 Brandon Finnegan is the most familiar pitcher going to the Reds. Finnegan was the no. 1 draft pick last year of Kansas City and by September was throwing out of the Royals bullpen. Finnegan was even a big part of the Royals postseason run, pitching in 7 playoff games and outside of a bad World Series game, he performed admirably. So far this year he has bounced back and forth between the minors and the majors, as the Royals have flip-flopped on his role. Originally Finnegan was supposed to stay in the minors and work on being a starter, building up his arm to throw more innings. That didn’t last long as he was recalled early in the season and dispatched to the bullpen. In 14 major league games this season, Finnegan has an ERA of 2.96, 138 ERA+, 4.67 FIP and a WHIP of 1.192 over 14 games. Some in the organization had soured on him, partly because of his conditioning during the offseason(Finnegan had noticably put on weight when he arrived at Spring Training) and partially because some in the organization saw him as a reliever, not a starter. Finnegan has a good arm and is still early in his career and it will be interesting to see just what Cincinnati does with him going forward.

The resurgence of John Lamb has been one of the bigger stories in the Royals organization this past year. Lamb had Tommy John surgery back in 2011, back when he was one of Kansas City’s top prospects. Lamb would return in 2012, but not as the same pitcher he was before. In fact Lamb had struggled these last 3 years, throwing with less velocity and even having issues with his off-speed stuff throughout that span. After an up and down 2014 where Lamb would sometimes look like the guy that would one day be a part of the Royals rotation with Mike Montgomery, the question became ‘what now’? Well, Lamb has been nothing short of great this year in Omaha, a 2.67 ERA, and a 1.155 WHIP over 94.1 innings in 17 starts. Lamb made the AAA All-Star team and his name had been mentioned quite often when discussions were had about possible starters in Kansas City. Unfortunately, management looked at Lamb as almost a last resort, as the team preferred starting a veteran like Joe Blanton over calling Lamb up. Like Montgomery, I believe Lamb deserves a shot. Cincinnati might accomodate him on that, since Kansas City didn’t seem willing to. 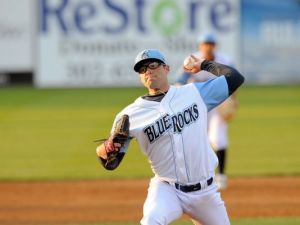 Finally, there is Cody Reed. Reed is a 22 year old, 6’5 lefty that is in his third professional season and recently was recalled to the Royals AA team in Northwest Arkansas. Reed is a hard-throwing southpaw, throwing in the mid-90’s with a curveball with good movement. He has had some issues with control so far in his career, although his BB/9 this year has hovered around 2.5, an improvement over the7.0 during his first pro season. Reed has been climbing up the Royals prospect list and there have been solid comparisons made to another Royals farmhand, Sean Manaea. If there is a steal in this deal for the Reds, it would be Reed. I can see him being in the majors at some point in 2016 if things go right for him.

The best part of this trade for Kansas City was they were able to acquire a top level arm for the rotation and gave up no top prospects or major parts of their roster. None of the three players traded to Cincinnati were going to be major fixtures for this team anytime in the immediate future and top prospects in the Royals farm system(Kyle Zimmer, Raul Mondesi, Manaea) were untouched. To me, this is a big success on Moore’s part and should definitely be chalked up as one of his better trades. I also really loved that the Royals front office did whatever needed to be done to get this team back to October. Myself and many others have lambasted Moore and the rest of the braintrust in the Kansas City front office over the years, but they have done their part and no one can blame them for not trying their hardest to help this team win. Us Royals fans have been spoiled since late September, as almost every move on and off the field has worked out for this organization. If we are celebrating a World Championship in late October, we can point to this acquisition as a major step in getting the Royals to that point. Knowing the organization will go out and strengthen this team is a great feeling and I hope when Alex Gordon has his time to negotiate a new contract he keeps this in mind. Johnny Cueto is a piece of a large puzzle that Kansas City has been patiently working on. Now it is time to finish the puzzle and just watch it in all it’s glory.