It was the last series before the All-Star Break, and by design it should be a simple three games before a large contingent of the Kansas City Royals(active roster and coaching staff) take off for Cincinnati. Instead it was three games that packed as much action, excitement and insanity that a series could. No way, right? Um, read on. It was crazy.

I have issues with Eric Hosmer. Seriously, peruse through this blog. You will find more words written about Hosmer than any fan should probably ever consider writing. But I have gone down that path and it’s because the guy mystifies me. One minute, he looks like a major leaguer that completely forgot how to hit, mechanics and all. The next minute he looks like a perennial All-Star and someone who could regularly compete for an MVP. So which one is he? I think after all this time he is actually both. He is obviously someone who’s mechanics at the plate get messed up while his pitch selection seems to go south for weeks on end. Luckily it seems as if Eric is starting to come out of a prolonged slump and start to get on base consistently. Hosmer was 6 for 12 in this series, with one double, 2 RBI’s and a BAbip of .545. Sure not ‘blow the doors off the barn’ numbers, but I like that he was getting on base, including a 4 hit game on Friday night:

I do have one wish of Hosmer, and that is for him to drive the ball more. His Line Drive % is up this year(23.1 to last year’s 16.9) which is promising, but there is a stat that is insanely higher for Hosmer this year that scares me. Hosmer’s IFH% (Infield Hit Percentage) is sitting at 6.2% this year, compared to last year’s 1.9%. Now in the past he has had a % in that 5-7% range, so the outlier number might be last year’s, but it just feels like we have seen Hosmer get a lot of infield hits this year. Over the last week we have seen him pull the ball with some authority a bit more, which his Pull% this year is down just a tad(34.9% to 36.8%) from last year. I know the Royals have been pushing to have Hosmer turn on the ball more than he does, but it also seems like he is at his best when he is driving the ball to left-left center. The improvement this past week is a plus, but I think we could see an even more potent Eric Hosmer and hopefully that guy will show up just around the corner. Otherwise I will accept the guy who gets on base at a .500 clip during a series. Getting on base is half the battle. 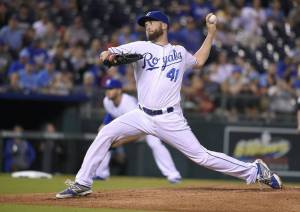 Before the season started I stated that I felt like Duffy could very well be the key to how the Royals performed this season. My thinking was since he was going to be a bigger part of the rotation this year, the Royals would need for him to be healthy and pitch like he did last year. So far he has struggled to do either of those things(and the Royals are still on top of the American League Central), but if he pitches like he did on Friday it could go a long way toward adding another piece to the rotation puzzle. Duffy went 6 innings, giving up 4 hits and no runs while walking 3(while also plunking a batter) and striking out none. Yep, look at that line again and you would wonder what happened to the Duffy that would rack up the strikeouts while also adding to his pitch count in the process. This lead to his second best game score this season and a victory over the Jays. He still hasn’t quite looked like 2014 Danny Duffy, but there is at least progress and he seems to be getting closer and closer to that guy after every start. It wasn’t a Cy Young performance, but it was exactly what the Royals needed.

You Wouldn’t Believe Me Even If I Told You…

How would I describe Sunday’s game? Crazy, absurd, mind-boggling, unreal and sometimes ugly. Yep, the rubber game of this series was one of those games that made no sense.  Let’s start from the beginning. In the bottom of the 1st inning, the Royals tacked on 6 runs, including a mammoth home run from Kendrys Morales:

Kendrys Morales HR was calculated at 453 ft, longest of his career. It's also 2nd-longest by @Royals player this year pic.twitter.com/eHzpwlGvTN

Instantly, I figured the game was over. Silly me. The Royals were up 7-0 in the 6th inning when the Blue Jays would score 8 times and put them ahead 8-7. Craziness really did ensue at this point, as the Royals had collected 3 errors. I can’t even remember the last time Kansas City had 3 errors in one game. The Royals would counter and go up 10-8 in the bottom of the inning, highlighted by a Jose Reyes 2 run error. Watching this series, I wasn’t too impressed with Reyes’ defense. Remember the bad throw last year in Toronto that helped the Royals come back with a big victory? It just felt like Toronto was going to do everything it could to hand this game to the Royals. The Blue Jays would strike back in the 7th inning, thanks to another Kansas City error:

It could have been even worse for Kansas City in the top of the 7th inning if it wasn’t for Salvador Perez and his ability to see everything laid out on the field:

I loved Martin’s comment after the game about Perez:

“If you look at it, I really wasn’t that far [around third],” Martin said. “That kid has a cannon arm. What I did recognize was the pitcher was kind of lazy to get to and cover home plate. I’m rounding third base with a full head of steam and thinking aggressively.”

Wade Davis would come in for the 8th inning, and how many of us instantly thought “Nothing happening this inning”? Except Davis did a very un-Wade Davis thing to do, and gave up a run(which ballooned his ERA up to 0.46). Seriously, I don’t think I would have believed it if I hadn’t seen it. Then it would get crazier; with a runner on first base,  Jose Bautista would get himself ejected from the game:

It would stay tied going into the bottom of the 8th when Paulo Orlando continued his magical week:

As if that wasn’t enough excitement, there was the old ‘strike ’em out, throw ’em out’ to end the game:

So the Royals came away with another victory in one of the wackiest games I have ever seen:

After that six-run first inning, I never would have guessed this would end up being a come-from-behind win for the Royals.

Now here is some news and notes from the final series of the first half of the 2015 season:

While you are delayed, here's a quick story on Mike Moustakas, his mom and the All-Star Game: http://t.co/EIyUuF5U7M

Everybody is in on the #FinalVote. See how fans have been showing the love: http://t.co/KawznLtjdK pic.twitter.com/hGwtEMPoNz

Stat of the Day: The @Royals are the only team in baseball that has played above average defense at every position. Their +42 DRS leads MLB.

He’s in! @Mooose_8 is the AL’s All-Star Game Final Vote winner. THANK YOU for all of your #VoteMoose support! pic.twitter.com/T5JUHjWXbP

The legend of @BoJackson includes an #ASG MVP. Who will YOU vote @Chevrolet #ASG MVP on Tuesday? #ChevyBaseball pic.twitter.com/HnezTN0owO

Somewhat fascinated by the fact that the Royals have the lowest K% in the league & yet have the 2nd worst chase rate http://t.co/hizu5VXhBB

The best part about the Christian rock concert at Kauffman right now is the guy wearing an Omar Infante jersey on stage.

The @Royals +62 run differential at the break is the 3rd-best in club history and best since the '77 team was +66.

The #Royals have a team-record 52 wins at the All-Star break!

#Royals win! It's their first win when allowing 10 runs since June 2008 against the Giants.

So there you go, as the first half of the baseball season is in the books. The Royals are currently sitting in first place in the American League Central, 4.5 games ahead of the Minnesota Twins. The Royals will return to action on Friday against the White Sox, as they will have a doubleheader on Friday, one being a makeup game from earlier in the season. We are getting close to the trade deadline, so it will be interesting to see if the roster does some fluctuation over the next couple of weeks. If you remember last year the Royals picked up a couple players during August, which means they had to go through waivers. We also have a good chance of finally seeing Kris Medlen make his Royals debut in the second half, which will hopefully strengthen the pitching staff. It’s too early to say this team will be in the playoffs come October, but so far so good. One half down, one half left to go. I’d like to go to another playoff game this October; lets make that happen Kansas City!