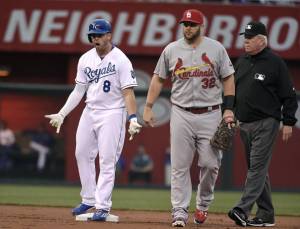 A couple times a year, the venom comes out in me. It’s a very specific time and it happens for a very specific reason. It happens because the Kansas City Royals play their state rivals, the St. Louis Cardinals. Look, I respect the Cardinals organization and think they do a top notch job with their scouting and development throughout their minor league system. It’s obvious by the way the team churns out player after player that they know what they are doing. No, my distaste for this team is purely on their fanbase. You know, the ones that one time about 20 years ago were appointed “the best fans in baseball” by The Sporting News, a company based in St. Louis. The thing is, even though many of the fans there are fine, great humans and very respectful(Hi Ryan!), there have many I have met that are far from it. Every fanbase has them(I know some Royals fans that I wish I didn’t know), but there seems to be more of a sense of entitlement from St. Louis fans. So it brightens my day a little bit more when the Royals beat the Cardinals. Yes, I get a bit more joy from it then I should. Luckily, we saw 2 wins from Kansas City in this series, even if one of them was a rain shortened affair. So how did it come about? Just read on…

I will admit it; I didn’t like the Royals signing Morales. I felt his 2014 was the beginning of his regression, not the fact that he had missed Spring Training and didn’t play until June. Sure, we are only 2 months into the season but so far Morales has made me look like a big dummy. All he has done so far in 2015 is lead the league in RBI’s, be near the top in doubles, put up an OPS+ of 135 and a WAR of 1.1(which is all offense at this point since he hasn’t played in the field yet). This series he started out with a bang, as he would club a 3 run homer in the 1st inning:

Morales would follow that up in the 3rd inning with another blast to right field:

So if you are keeping count at home, that is 5 runs for Morales, 0 for the Cardinals. Yep, that was all the offense the Royals would need that night, as they would go on to shutout the team with the best record in the National League. Morales would end up 4 for 9 against the Cardinals over the weekend, scoring 3 runs while raising his slugging percentage by 45 points. I’ve recently thought about who in this lineup would be missed the most if they ended up M.I.A. and if it isn’t Mike Moustakas(who the Royals did miss in the Texas series) then it would be Morales. Hopefully he keeps it up and he can continue making the case for American League comeback player of the year, which is seems like he is on track for.

When Young signed with the Royals in March, it seemed like the rotation was already set and Young would be the odd man out. The team explained early on that Young would be on the Opening Day roster, even if that meant he started the year as a long reliever. I was personally fine with this, as every team needs extra pitching at some point in the season and Young was coming off being named the ‘Comeback Player of the Year’ for Seattle. Young got his first start of the year on May 1 and since then he has probably been the Royals best starter. On Friday, Young continued his high level of performance with another stellar outing against the Cardinals. Young got 6 innings of work in, giving up 6 hits, and no runs while walking 2 and striking out 2. His ERA lowered to 0.78…and 0.40 in his 4 starts!

Six scoreless from Chris Young. He's given up one ER in 22 2/3 IP as a starter. Gonna be tough for KC to send him back to the bullpen.

In my eyes Young deserves to stay in the rotation until he proves otherwise. With Danny Duffy scuffling and Jason Vargas on the disabled list, it is an easy answer; Young stays put. But I have a feeling at some point a harder decision will need to be made…and if Young is still worthy, he should still be holding onto a spot in the rotation.

If you watch Alcides Escobar every day, from time to time you utter the phrase “I can’t believe he just did that”. It’s almost been a crime that Escobar has barely warranted attention to being nominated for a Gold Glove award(which he was last year), let along the fact that he still hasn’t won one. On Friday night Escobar showed why many of us refer to him as “Shortstop Jesus”:

Just amazing! Maybe it’s because the Royals had Yuniesky Betancourt for years at shortstop, but I feel like we should be thankful every day that we get to watch the golden defense of Escobar. Funny thing is, that wasn’t the only great play he would make in this series:

I talk very glowingly of Alex Gordon in left field, but I am almost as impressed with Escobar on a daily basis at shortstop. The Royals are lucky to have him locked in for awhile and to be a steady force in the infield. His offense might not always be perfect, but I have zero complaints about the defense. He is purely of another world.

Now onto a few notes from this I-70 Series:

Danny Duffy said he felt stiffness in shoulder yesterday. "Felt like I needed a little WD-40 on it." #Royals

I’m playing a bit of ‘Devil’s Advocate’ here but I would almost bet money he doesn’t start on Tuesday. My gut tells me Vargas will come back and Duffy will take his spot on the DL. I’m not saying Duffy isn’t injured, but it would give the Royals a reason to send him down to AAA(on a rehab assignment) while also not using any of his options. It isn’t the worse idea, with the way Duffy has been pitching as of late.

Elias: KC has the best record in MLB. This is the 1st time KC has MLB's best record at least 40 games into a season since Sept 9th, 1980.

I don’t know about anyone else, but this was about as good a feeling as a baseball fan can get. To go from laughingstock of the sport to best record in baseball in just a few short years? Yep, it feels pretty darn good!

The #Royals and Cardinals are playing with both teams in first place for the first time since June 2003.

Key stat to watch all series: @Royals are best in MLB w/ RISP & Cardinals are best at pitching in same situation. KC 2-for-5 thus far.

It is Kendrys Morales' world; we just live in it. #Royals #ForeverRoyal #I70Series

Kendrys Morales is the first Royal with two HR in a game this season! Three did it last year: Gordon, Moose, Kratz.

For Kendrys, tonight is his seventh career game with five or more RBI (four games with six, three with five). #Royals

Last seven games, the Royals have a run differential of plus-30. http://t.co/tJDFvNzNtE

Morales and Cain each have 5 RBI in a game this season. Only two #Royals did that all of last year: Gordon and Infante.

#Royals moved @DaleSveum from 3rd base coach to Hitting coach 5/29/14. Since they have 2nd Best batting average in #MLB and 2nd Best record!

Last rain-shortened game for the #Royals was April 10, 2012, a 3-0 win over Oakland called after eight innings.

The Royals have 100 more hits than their opponents already this season; five KC hitters on pace for 177 or more hits. http://t.co/EwaIMoFIe1

A small part of me(fairly small) really badly wanted a sweep, but there will be no complaints from me with a series win over the Cardinals. If anything it is some good mojo headed into New York to take on the Yankees for 3 this week. This road trip should be fun, as there is the games in New York and then 3 in Chicago against the Cubs. Hopefully the starting pitching can continue their streak of good starts and the offense can look past Sunday’s game against St. Louis. We are almost in June and talking best record in baseball; it’s hard not to feel like someone should pinch me. A 4-2 road trip is optimal but 3-3 would probably keep Kansas City’s lead in the Central. So for another week, the eyes of baseball are on the Royals. As much as it is weird, it is nice as well. A guy could get used to this kind of attention!