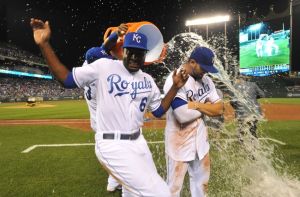 As most of you know, the Royals and Yankees used to be a very heated rivalry. Back in the day, the Royals hated the Yankees and the Yankees hated the Royals. There is a variety of reasons to not like the Yankees(I’ll remember at some point to compile a list) but I am one of the old school Royals fans who remembers this feud and despite this rivalry being very one-sided the last couple decades, I still hold on to my dislike for the Bronx Bombers. So to start this weekend with these two teams clashing, my feelings are already heightened. Add in that both teams came into the series in first place in their division, well…lets just say it had some added fuel. Would that fuel start a fire? Or would it just stink up the joint? Let’s dive in.

Before the season started I made the comment that I was most intrigued this year to see if Lorenzo Cain’s development would continue and 6 weeks into the season I have to believe that is a big ‘YES’! Cain’s impressive offensive output continued this weekend, as he would go 4 for 11, with a big 5 RBI game on Friday night and 3 runs scored this weekend:

Tack on a few more shoestring catches and a running grab near the wall and you have yourself a guy who continues to excel. It did appear throughout the weekend that anytime there was runners on base, Cain was in the middle of the action:

7 times Lorenzo Cain has come up this season with a runner on 3rd & less than 2 outs and 7 times the @Royals have scored a run.

I made the comment earlier this spring that I didn’t know if Cain could hold up his .380 BAbip from last year, but so far he is sitting at .377, which is pretty darn close. I love the idea of having a number 3 hitter in the order who has speed, which is one more weapon to worry about if you are fielder and Cain hits the ball to you. We are still about 2 months away from the All-Star game in Cincy, but it would appear that Cain has quite the argument for being on manager Ned Yost’s squad.

The fact that I had three options for this spot is good news and the performances of Chris Young and Joe Blanton will be mentioned in just a bit. The starling start of Edinson Volquez though was a masterpiece and one of his best outings so far this year. Chalk up another quality start for Volquez as he would go 7 innings on Sunday, giving up 3 hits, no runs and 1 hit batter while striking out 5. This lowered his ERA to 2.74 and was much better than his last two starts. Volquez had great stuff today, mixing up a solid 2-seam fastball with some great off-speed stuff. This kept the Yankees offense off-balance and kept them off the basepaths. It seems that when Volquez keeps the ball down like he did Sunday he is fine. When he gets the ball up in the zone is when he normally finds trouble. These would also seem to be some words of wisdom for Danny Duffy as well, as he has struggled with that same issue so far in 2015.

The Moose is Loose

On Friday night, Mike Moustakas almost put himself into the Kansas City record books as he ended up just a home run shy of the Royals first batter to hit for the cycle since 1990. Who accomplished that feat? None other than old #5:

So history was on the line when Moustakas came up to the dish in the 7th inning, and we were all hoping for a ‘Moose Bomb’. Well, hoping, since most of the time the percentages say the chances of completing the cycle is not very good, let alone finishing one off with a home run. Moose would not get his dinger to finish the cycle, but he came about as close as a batter could without actually accomplishing the feat. Moustakas lofted a fly ball to left field, and the ball bounced off the left field wall, missing a cycle by a mere 4 feet. I initially thought there was no way he would finish the milestone, but as that ball traveled down the left field line I couldn’t help feeling like Moustakas just might do it. Alas, he came up just short, getting his second double of the night and finishing the evening going 4 for 5 with an RBI and 3 runs scored. It’s not quite a cycle, but it’s still a pretty good night. 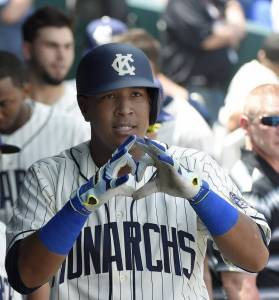 Now onto the news and notes from another series win for the Royals of Kansas City:

Ned said this morning that Duffy will make his next start but that he has to show improvement or…. #Royals

Duffy still has options, so if Jason Vargas is able to come off the disabled list this week then Danny could be the casualty. I’ve mentioned it before, and I will again: maybe Duffy should give old pal James Shields a call. At this point it couldn’t hurt.

"I'm not sure I understand what the Yankees are doing here defensively." -Denny 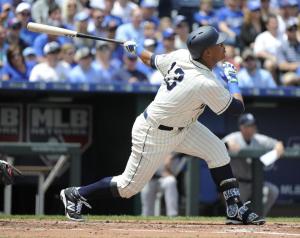 KC hitters only 1 K vs. Pineda. The Royals are the wonderful exception in this Age Of The Strikeout.

There's a bar in Brazil that shows every #Royals game, because Paulo Orlando http://t.co/jx2p6qraG3 pic.twitter.com/DJSzx3eQ0V

Mike Moustakas currently has a .392 OBP in the 2 spot and leads all AL 3b in fWAR and rWAR. Take that all in folks

Mike Moustakas has two four-hit games this season. He had two in 514 career games before this year. #MOOOOOOOOOOSE

Chris Young has a 0.54 ERA as a starter this year. Other #Royals starters have a combined 4.96 ERA.

I think I gained a lot of Royals fans followers yesterday. So in honor of that, a Mike Moustakas heat map pic.twitter.com/q4xA4iLKzX

In his last 77 appearances Wade Davis has given up 4 ER while striking out 105, allowing 56 baserunners over that span

Miguel Almonte won his fourth game in a row while increasing his scoreless streak to 16.2 IP.

Mark Teixeira on Edinson Volquez: "It's as good as I've ever seen him."

Nice touch from the @royals to use the Ken Burns video of Buck O'Neil sing "Take Me Out to the Ballgame" during the 7th inning stretch! 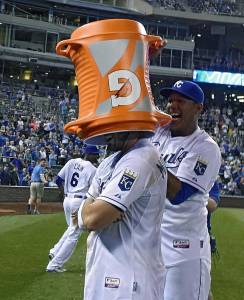 So now the first place Royals(!!!) will take Monday off while waiting to open their interleague schedule in 2015 and take on the Cincinnati Reds in a two game series on Tuesday and Wednesday this week. One does wonder if the Kansas City scouts will be taking an extra look at Johnny Cueto on Tuesday, as he could be a possible mid-season acquisition if the Royals are in the market for a starting pitcher. This series will also set up a nice rivalry weekend, as the Cardinals will come in for three. Let’s hope for a change than the last few times the Cardinals have been in Kansas City; I would rather see a sea of blue in the stands than a sea of red. A sweep of Cincy would go a long ways toward building momentum against St. Louis and keeping a little bit of distance between the Tigers and Royals. No matter what, it should make for a fun week at ‘The K’ this week, so make sure you head out if you can!