May came in with a flurry on Friday and it also meant the Detroit Tigers were in Kansas City for a 4 game series against the Royals. I can’t even remember the last time a series in May(May!!) brought this much excitement, as many believe the American League Central could come down to these two teams in September. Not only was this a big series early on, but the fans of Kansas City showed up at ‘The K ‘ as if the division was on the line. In fact attendance has been spectacular so far in 2015, as even night games in the middle of the week are showing good attendance numbers. But the games still have to be played and this series had a little bit of everything in it. As a longtime Royals fan, it was nice to have this kind of excitement and the ‘October Buzz’ floating around this early in the series. So what all went down? Venture on for an in depth look at October feelings in May.

It wasn’t a blow away series for the Royals offense this past weekend, but it was a very productive one for Eric Hosmer. Hosmer went 5 for 16 this weekend, accumulating 3 extra base hits, including his 3rd home run of the season. It was probably his best series of the year, as he stockpiled 10 total bases, and slugged at a .625 clip with 2 RBI’s. Maybe the most impressive stat on Hosmer this series was a BAbip of .444. To me, having Hosmer excel in a big series(even in May) is what the Royals need and hopefully he continue his consistency as of late. He still sometimes swings at pitches that he shouldn’t even be acknowledging, but his approach at the plate has improved and the numbers show that so far. My favorite stat of his so far this year are his numbers in high leverage situations. The last few years Hosmer has struggled in clutch situations, but so far in 2015 he has looked like a different batter when it really matters. He is only hitting .176 but he has an OBP of . 364(thanks to 5 walks in the clutch) and a slugging percentage of .588. He has 2 of his 3 home runs in these tight spots, driving in 6. The numbers show a batter who has been a little bit ‘all or nothing’ in these spots(mainly homers and walks), but overall we might be seeing a batter start to really show the potential we have been salivating over for the last 5 years. I will take these numbers from Hosmer every time Detroit and Kansas City clash; at this point lowering his strikeouts would be about the only complaint I really have with Hos. 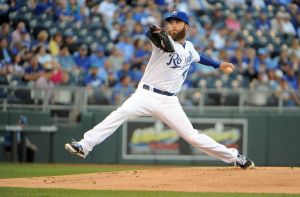 I’ve been a little down on Duffy so far this season. He hasn’t pitched horribly, mind you. But he has looked more like the Duffy who had high pitch counts and wasn’t very efficient than the Duffman we saw in 2014, the one who felt like a legitimate top of the rotation starter. On Thursday night he looked like last year’s Duffy and it was glorious. Duffy threw 7 innings, giving up 7 hits and 1 run while walking 2 and striking out 7, all in 101 pitches. In the biggest series to this point in the season, Danny Duffy went out there and was very gnar.  I think we all hope at this point that this is  the Duffy we will see the majority of the time going forward. The Royals rotation definitely needs it and I still believe that Duffy is the key to this season. The rotation has had question marks as of late and Duffy’s start was one of 3 really great starts in this series. More on that in just a moment. 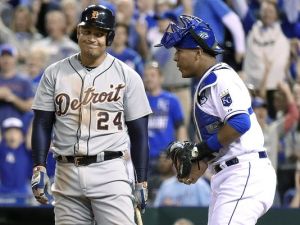 Friday night had one of those epic moments that make you love being a baseball fan. There is nothing quite like a fastball pitcher battling it out with the greatest hitter of this generation(I’m assuming no one is going to argue with me on that point?). In the 8th inning on Friday, with the Royals up 4-1 over Detroit, Kelvin Herrera would walk Ian Kinsler, bringing Miguel Cabrera up to the plate with the bases loaded. I can’t do this at bat justice, as it was easily one of the best things I have seen so far in 2015, but Craig Brown of Royals Authority did a great piece on the 10 pitch battle, really going in-depth and breaking down the at bat. Good stuff. At the end of the day, Herrera would get the better of Miggy and send him back to the dugout. Herrera was shaky that inning, but in the end he kept things in line and left Kansas City with the lead. Just an amazing at bat, and one you should watch if you have not already seen it. The look on Cabrera’s face at the end is worth another view, even if you have seen it.

Now, onto more newsworthy notes of this epic battle between the 1st and 2nd place teams in the American League Central:

Sean Manaea is expected to leave extended ST for a minor-league assignment by the end of May. Still dealing with abdominal strain.

The #Royals are 7th in the AL in attendance and will have a sold out weekend. They're on pace to draw 2.3 million fans, most since '89.

8 earned runs in 70.2 innings for the KC bullpen. Not supported by FIP, unsurprisingly, but incredibly impressive.

A teammate tried to dump ice on @SalvadorPerez15’s equipment and he was not amused: http://t.co/sczMUvPxzl pic.twitter.com/YTTcFqNMyG

No other catcher has been behind the plate for more than 86% of his team's innings. Perez has caught 96% of the #Royals innings.

Chris Young is the first #Royals starter to be pulled with a no-hitter of 5+ IP since J.P. Howell in 2005.

So the Royals split this series with the Tigers and the Royals will travel to Detroit this upcoming weekend for 3 games in the Motor City. I know I should be happy with a split, but after those first 2 games of the series I was really hoping for a series win. The Royals have Cleveland up next, as the Indians are in for 3 at Kauffman Stadium and one can only hope this series goes like the one in Cleveland last week. The Royals will get Cain back from suspension on Wednesday and Yordano Ventura should be back on Friday. May has always been a tough month for the Royals and hopefully they are able to not endure the cesspool that has been May the last two years. If it does, Dale Sveum should start looking for work. The Royals now sit in 2nd place in the Central, just 1/2 a game out of first. A solid week could return them to first as they battle within their own division. Contending baseball is fun folks. This is what Kansas City Royals baseball is in 2015.