The first series is in the books for the 2015 season and the Royals came away with a sweep of division rivals, the Chicago White Sox. One of the big questions being asked all spring was how the Royals core of players would handle the lessons they learned from their playoff experience last fall. Early on it appears as if this team has taken over where they left off in October, with the bravado and swagger they showcased during that special month. In fact they had good reason for that swagger, as there was very little this team did bad in these first three games against Chicago. Time now to breakdown the first three games of the season.

This seemed rather easy but at the same time there were a number of players who can say they had a stellar first series of the year. Alcides Escobar led the way with 6 hits this, Salvador Perez, Eric Hosmer and Cain all had 4 RBI’s while Cain and Perez led the way with 9 total bases. What separates Cain though is how big his hits were PLUS the defensive gems he doled out today. Cain hit the go-ahead home run in Wednesday night’s game while knocking in the first run of the game on Thursday. Cain has really adapted to being the third hitter and it appears that health could be the only thing that could get in his way in 2015. The fact that we could name 3-4 players as serious MVP’s of this series says a lot about just how well the Royals offense is clicking right now. No way to determine if they will be able to hit like this fairly consistently, but it does at least give some hope to people like myself who have worried about this offense being worse than it was in 2014.

I was all ready to give this to Yordano Ventura but the honest truth is Volquez had the better outing on Thursday. Volquez’s line says it all: 8 innings, 4 hits, 1 run, 1 walk and 5 strikeouts. Volquez utilized the same philosophy he used in 2014 in Pittsburgh; keep the ball down, let the hitters make contact and let your defense take care of the rest. He was efficient as well, throwing only 95 pitches in those 8 innings and keeping Chicago off-balance for most of the day. If Volquez pitches like this on a regular basis it won’t be hard giving Dayton Moore credit for signing him to a two year deal this past offseason. 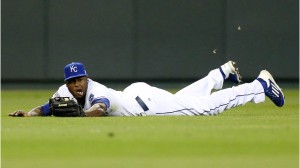 Defensive Play of the Series: Lorenzo Cain on Thursday

I mentioned earlier how Cain made two spectacular catches on Thursday. Both were highlight worthy but only one made me gasp:

Trust me, my first thought was worry that Cain was hurt. Luckily he was not and was able to make another sweet grab against the wall later on. The Royals defense sparkled again this series with a plethora of great plays by possibly the best defense in the game.

Other Notes From This Series:

Things to Work On…

There was very little the Royals didn’t do good this series. In fact so much so that my only complaint is simply a nitpick and a personal preference. The early inning sacrifice bunts have been aplenty so far. Hey, once or twice, fine, I get it. Most of the time it’s even been the players decision, like Escobar trying to bunt for a hit earlier today. But I just hope this doesn’t become a constant thing. It feels like early on they have been playing for one run instead of looking for the big inning. This seems like more of a thing to do if the offense is struggling and you just want to get a run on the board. The offense is clicking right now, so just let them swing, especially when they are swinging the bat well. Like I said, it’s just a nitpick, nothing more, nothing less. Other than that I have no complaints so far; this Royals team is simply playing good baseball.

So one series down, many more to go. It feels like this season has just been a continuation of how the Royals were playing in October and that they are on top of their game right now. We will see if that continues as the team travels to Anaheim to play the Angels for three this weekend. We will see Jason Vargas and Jeremy Guthrie make their first starts of the new campaign and there is also a good chance we will see former Royal Johnny Giavotella, as he is the Angels new 2nd baseman. Will the Angels avenge their losses to Kansas City in the American League Divisional Series? Or will the Royals continue to dominate Los Angeles and prove to everyone they are for real? Folks, we will know soon enough as game one of that series kicks off Friday night at the ‘Big A’. Let’s hope Kansas City is still undefeated when they travel to Minnesota next week.