(Editors Note: I originally wrote this piece back in 2006 for PWInsiderXTRA.com as they were looking for sports articles to post on their site. I happened to stumble onto this while cleaning out my old drafts and thought I would toss it on my blog. Enjoy and just know my thoughts on this really haven’t changed much in 9 years.)

The Major League Baseball home run record is quite possibly the most well known record in all sports. It’s a record that for years was held by an athlete who defined the sport, Babe Ruth. When it was passed some 30 years ago by Henry Aaron, many people were not happy with the record falling, with Aaron receiving many a racist letter and even death threats. The next closest person to Ruth’s 714 has been Willie Mays for many a year, and Mays sits at 660. Many felt no one would ever get close to Ruth’s old record, let alone Aaron’s 755. Then Barry Bonds came along. Bonds has always been a great athlete, but in the last 7 years he has obliterated the record books, and is sitting on the doorsteps of Ruth’s hallowed 714. He probably won’t reach Aaron’s 755, but Ruth’s is so close he can taste it…and Major League Baseball doesn’t like it.

In 1998, baseball was still recovering from the strike of 1994 that ended the season in August, with no World Series being played that year. Fans revolted, some even saying they would never watch baseball again. But in 1998, many a fan was brought back to the great american pastime, as two athletes chased the single season home run record held by Roger Maris. Mark McGwire was Paul Bunyan with a bat, a prolific slugger who many felt was the closest to Ruth of this generation. Sammy Sosa was well known among die hard baseball fans, and the lovable Chicago fans, but outside that he was just another player. That changed in this year, as these two players chased Maris’ record, bringing baseball back into the forefront. Many feel that was the year baseball was saved. It was also the year many started hearing grumblings about steroids.

Barry Bonds was quite possibly the best player in the game, a five tool player who could hit, hit for power, hit for average, field, and run, with a weak left arm being his only downfall. Bonds was a good power hitter, known to reach around 30 homers a year, but not a whole lot more. Bonds was more the complete player; he still stands as the only member of the 500 homerun/500 steals club. But when Barry showed up to spring training in 1999, there was a noticeable difference. He was big; very big. Bigger muscles, bigger chest, bigger head. Big all the way around. It didn’t go unnoticed; the rumblings in baseball about steroids had started years before, but it seemed no one cared. Baseball was in an upswing. No steroid policy was in the baseball collective bargaining agreement, so no testing was being done. Baseball seemed more enamored with their new-found popularity than seeing a growing problem underneath their nose. But this problem wouldn’t just go away.

Season after season, Bonds continued to hit home runs. He even eclipsed McGwire’s single season record of 70 by slugging 73. Bonds passed many a Hall of Famer on his climb to his own Cooperstown induction that seemed to be a simple formality. He even passed his godfather, the great Willie Mays, putting Bonds in 3rd place in all time home runs. But as records began to fall, more talk of steroid use and abuse was becoming prevalent. Congress was even beginning their own investigation into baseball’s dirty little secret. 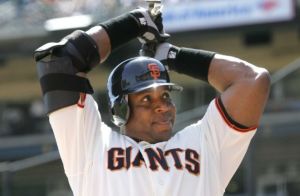 Baseball finally implemented their own steroid policy in 2005, as Congress looked on, almost making them do something that should have been in their agreement anyway. MLB looked the fool; nothing like the government to tell you you’re not patrolling your organization like you should. Baseball now had egg on their face, and decided after putting harsher penalties under the drug policy(with more pushing from Congress) that they would induct their own investigation into players past steroid use. But at what price?

Barry Bonds is one home run away from tying and two away from being the second most prolific home run hitter of all time. He is also the main target of MLB’s investigation. Why Barry? Could be his surly attitude, which has angered more than just a few of journalists, writers, announcers, fans and yes, baseball commissioners over the years. Could be that he is walking on hallowed ground, that of Ruth who some consider almost Godlike in baseball circles. Or it could be that with all the heavy scrutiny already surrounding him, MLB does not want to be associated with him. Commissioner Bud Selig has already said there will be no celebration if/when Barry breaks Ruth’s mark. Selig has used the phrase “we don’t celebrate getting second place.” That’s fine, and maybe even a little valid, but would they celebrate if this was Cal Ripken, Jr. breaking this number? Would someone of Ripken’s stature be made public enemy number one for this investigation and a possible fall guy? The answer is no.

So why wouldn’t he be? The answer is baseball has looked like the fool. They allowed steroids to run rampant in their sport with no penalties, all for the mighty dollar. Now that they have been called to the floor, they don’t want to take the fall. So let’s blame Barry Bonds. Better to blame a man that is already hated by many a fan then have to admit their own mistake. The mistake of letting a substance control a game. Nothing can be gained by going back and finding out who used and who didn’t. All it will do is paint a black eye on a sport that has been forced to take the right path and should be growing off of that. Instead they want to point a finger instead of pointing it at themselves. I’m not saying Bonds is not guilty and I’m definitely not saying he’s an angel. What i’m saying is MLB allowed this; there was no policy on record when all this happened. They made their own bed; too bad they probably won’t have to lie in it.