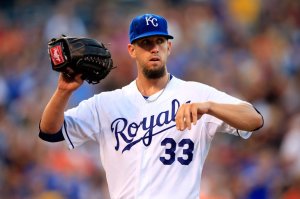 On Monday the Kansas City Royals extended a qualifying offer to ace James Shields, a $15.3 million offer that assures the team will receive a compensation pick for Shields if he signs with another team before June 8th. Shields can accept the offer, but he has to by November 10th. The odds say he will not accept it, as Shields will be looking for a multi-year deal at possibly a higher rate this winter and there are many teams(Red Sox, Cubs, Angels, Yankees, etc.) who will be enticed by James’ ability to be a workhorse for any team he has been with. It appears Kansas City will make a run at Shields, as evidenced by a report back in October that the team would offer him a 5 year, $80 million deal. But would this be the best thing for the Royals? Not in my eyes.

This is not an indictment on Shields or his performance. ‘Big Games James’ did what the Royals wanted him to do; stabilize the rotation, bring leadership to the clubhouse and get Kansas City to the playoffs. Check, Check, and Check. Shields has driven the rest of his rotation mates to reach the 1,000 innings plateau the last two years and even though they didn’t reach that goal, they came close both years. He was a great influence on both Danny Duffy and Yordano Ventura, helping them keep their focus and teach them how to be aggressive on the mound but not ‘too aggressive’. As much as I cringe when people bring up ‘character guys’, Shields is one and has shown this team of young players how to win and how to handle pressure situations. I scoffed at most of this when the trade from the Rays happened, but he has done all of these things and more to get this team to the playoffs for the first time since 1985. So there is value in Shields beyond just numbers and these are things that might not even be replaced if(when) he signs elsewhere.

But is he worth the 5/80 number thrown out there, or even more than that? To me this isn’t even about the numbers as much as the years. James Shields will turn 33 in December and has logged a lot of innings on that arm. A-LOT. In fact, he has accumulated over 1900 innings during the regular season and another 59 in the postseason. He has been fairly lucky injury wise, but it is normally only a matter of time until issues start showing up. If Shields was brought back for 5 years, that means he would be 38(almost 39) by the end of that deal. Can you see him holding up that late in the deal? I can’t. In fact we are already seeing a bit of regression. Over the last few years he has been using his changeup less and less, and even this postseason was mentioned as being more of a “cutter and fastball” pitcher. This isn’t always a bad thing(some think Shields’ changeup has been overrated) but when he doesn’t have a feel for his changeup, he has trouble, as evidenced in Game 1 of the World Series. Shields is a competitor and seems like the type of pitcher who would adjust as time takes away the zip on his fastball and the dip in his changeup. But it’s more probable that Shields will continue to regress and not be even close to the pitcher he is today by the end of a 5 year deal. 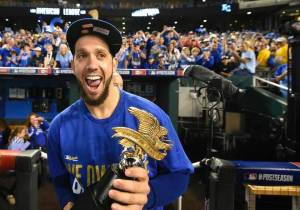 That brings me to a bigger concern, that being the sentimental aspect of this whole scenario. Look, we all loved the run the Royals went on in October. For many it brought out the little kid in us and reminded every one that even though baseball can take you down deep in the depths, it can also lift you to heights you would never imagine possible. But now that the season has ended it’s time to come back down to earth and look at this team from a realistic viewpoint. That means no bringing players back just because they were a part of the “American League Champion Kansas City Royals” and instead looking at the situation on whether that player(s) is a good fit for the team in not only 2015 but beyond. Does 5 years of James Shields really look good for this team? I love the guy as much as the next Royals fan but I also realize that regression is on his doorstep and it probably won’t be pretty. The sentimental factor especially comes into play with Billy Butler, who has been a part of this organization(easy for me to say) since he was drafted by Kansas City in 2004. Butler’s option for 2015 was declined by Kansas City, as his salary would have risen from $8 million a year to $12 million. But there are other factors that the team shouldn’t bring back “Country Breakfast”.

Maybe the biggest reason for the team to not bring back Butler is the fact that the team has discussed making the DH a rotating position for two years now and it would seem foolish now to change course just because the team could lose a longtime staple of their lineup. I’ve long been a supporter of Butler but unfortunately 2014 was a major downturn for him when it comes to production. Just going off of the stats Butler looks like a guy who has begun his regression at a younger age than most players do and his power especially has slid to a meek 41 total extra bases this past season. Back in 2009 Butler had 51 doubles alone not even counting the 21 home runs he hit that year…and 1 triple. Can’t leave out the triple! Yes, Butler could bounce back and put up numbers comparable to his 2009 and 2010 where his OPS+ was 125 and 134 respectively. Numbers like 2012? Probably not. That was a career year if there ever was one. But he could bounce back.

But the numbers factor alone shouldn’t decide whether Billy comes back or not. With the team wanting to rotate the DH, that will leave Butler with less at bats and less games to show his worth. He also loves playing out in the field, and the Royals just aren’t good at resting Eric Hosmer(he of the Gold Glove defense) and letting Butler get some reps at the first base. So Butler could come back(and it has been discussed within the organization)but it would be on a lesser salary and less playing time. That doesn’t bode well for a player who needs to pile up better numbers so he can get another big contract before he trots out to that  corn field in the sky(Wait, that makes it sound like Butler will die when he is done playing baseball. Not what I meant. My bad). Baseball players have a fairly short amount of time to make as much money as humanly possible. Butler, soon to be 29, is running out of time. Coming back to the Royals, no matter how much he loves this team and the town, just seems like the equivalent of spinning one’s tires. Personally I would love for Butler to retire a Royal, but I get why he needs to leave, and now makes the most sense. Even if it crushes my son, a huge Billy Butler fan.

The hardest thing about baseball is that it is a business, and no matter how much joy it can give you, it’s always lingering around to remind you that nothing lasts forever(even cold November rain). Dayton Moore has some tough decisions to make this offseason, especially when it comes to two key elements of a team that ventured to the World Series. James Shields and Billy Butler are two players I have enjoyed watching excel at their craft. But with the Royals being a small market team, they have to be especially intelligent when it comes to structuring a roster that can return them to the playoffs in 2015. With that in mind, it seems like it would be wise to let Shields and Butler go. It might not be what the heart wants, but the brain should be the one making the decisions this winter for Kansas City.