This past Sunday night the Kansas City Royals completed their sweep of the Los Angeles Angels in the American League Divisional Series with a resounding 8-3 victory, advancing the Royals to the American League Championship Series. 29 years of no postseason action makes for many demons, not only with the organization but with the fanbase as well. The good thing is that the Royals have been purging many of these devils this October. For many of us, our mantra became “we just want to get to the playoffs”, as we knew how uplifting it would be for the franchise, the city and the fans. I was lucky enough to be one of the 40,000+ this past weekend to witness the completion of the sweep in person and purge my own demons at ‘The K’. 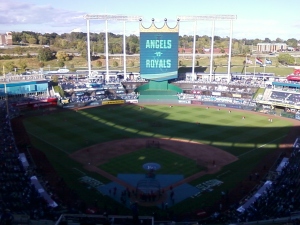 A few days before this game I lucked myself into a playoff ticket thanks to a friend. There was no way I could turn down getting to see my favorite team for 30 years break down the walls and be part of the playoff atmosphere. Little did I know when I bought the ticket that the Royals would be in line for a sweep if the cards all fell right. As I made my way to the gates to enter Kauffman Stadium, it felt like any other time I have been there. There was a bit more energy in the crowd than normal, but for the most part it felt like it had most of this season at my home away from home. As I walked around, I noticed little differences. Postseason banners hung from the rafters and there seemed to be more urgency in getting Royals merchandise from the team store. I found my seat(upper deck, right behind home plate) with about 90 minutes before first pitch and got myself settled. From my vantage point I could see everything; I might have lucked into the best tickets for what was about to go down. Before too long pregame would start up, and that was when it really hit me; I was at a playoff a game, a Royals playoff game! I could lie here and say it didn’t affect me, but it did. During the introductions, watching the crowd go nuts for players like Terrance Gore made me just smile from ear to ear. Even while the announcer was trying to get everyone ready for the National Anthem, the crowd loudly(and I mean LOUDLY) started a ‘Let’s Go Royals’ chant, one so loud you couldn’t hear Mike McCartney. You could tell he was talking, but that was it. This rabid fanbase was ready and dying to see their boys in blue finish the sweep. As the flyover occurred at the end of the anthem, I teared up. For 29 years I just wanted my Royals to go out there and reach the playoffs. I was now not only at one of those games, but one with a bunch of crazy bastards who completely understood how I felt. It was hard not to just break down in happiness at what I was about to witness. I was about to fulfill a dream that I had started to believe would never happen.

Once the game started the insanity didn’t stop. I have always said the loudest I have ever heard that stadium was during Robinson Cano’s weak effort at the Home Run Derby in 2012, but Sunday night it was louder. The crowd yelled, stomped and waved their blue and white towels(homer hanky?), cheering on their team and cheering on the fact that the Royals had made the playoffs. The crowd early on hung on every pitch; Mike Trout tried to upset the mood with a 1st inning home run off James Shields, but it only calmed us for a bit. The Royals would retaliate in the bottom of the inning, as team leader Alex Gordon continued his clutch ways with a bases clearing triple, putting the Royals up 3-1. Insanity ensued. At that moment any chance of me being even slightly sane went out the window. Complete strangers started high-fiving each other, as we were almost all of the same mind and soul. If we had to, we were going to will this Royals team to a victory. Luckily, no willing was needed as the Royals continued the onslaught, not bothering to let up on the Angel’s throat. Eric Hosmer would add a two run home run in the bottom of the 3rd and Mike Moustakas added a scorcher of his own the following inning. Not even an Albert Pujols solo job could deter things. By the 4th inning I was texting a friend, asking him if it was too soon to start counting outs. He said too soon; yep, we are a superstitious bunch. The roof about came off the place when Billy Butler stole a base; if there was ever a sign that the Royals were going to win, that was it. Billy Butler???

That’s what speed do! Between this and two amazing catches by Lorenzo Cain, it just seemed to spell doom for the Angels.

Numerous times during the game I would look around me, look to the left and then to the right. Happiness, all around me. So much suffering was being let go that night and words can’t even describe how glorious that was. More than anything it felt like a giant weight was being lifted off of the collective shoulders of a fanbase that honestly could have just walked away and chose some other team to cheer for. Instead, we all stayed and were being rewarded for our loyalty. 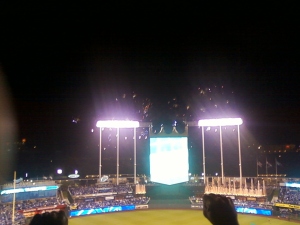 Before the top of the 9th, a video played on CrownVision. I wish I could remember it verbatim, but instead here was the synopsis; this is what we had waited for. It was almost time to celebrate the Royals advancing to the ALCS. Three outs later, everyone in the stadium lost their collective minds. I have never heard ‘The K’ that loud, and I seriously wonder if I ever will hear it louder than that. Strangers high fived, hugged and grown men openly wept. I have been a huge baseball fan for 30 years, and at that moment I had never been happier in my life. Sure, I remember 1985, but I was younger and thought that the playoffs would come again soon enough for Kansas City. This meant so much more to me, more than I can even try to describe here. We all yelled and cheered, hoping the moment would never leave. I know whenever I am old, and my mind starts to fade, there is a good chance I will remember this moment, as it will be hard to ever replace the emotion I was feeling at that time. To give you an idea of just how jubilant everyone was, as we piled out of the stadium, complete strangers started high-fiving everyone who walked by. There was no way I was not joining in, as I became part of the insanity. I would eventually walk out of there, and the rain would come. I was drenched and couldn’t care less. The Royals were going to the ALCS, and I got to be there to be a part of one of the greatest moments in Royals history.

I’ve had a couple of days to reflect, and to be honest I can’t get the grin off of my face. I have felt over the years that I have been a very fortunate man to have gotten to experience some great baseball moments. Without a doubt in my mind, this was the best baseball experience of my life. It’s hard to really describe to people, especially those that aren’t Royals fans. This let out a lot of venom, a lot of pent up anger that I have held against this franchise for past mistakes. All I feel right now is love, to a team that I have loved since I started collected baseball cards and would try to get all the Royals player’s as soon as possible. The only thing that could have made this experience better would have been if my son, my grandma, my dad or girlfriend had been there(or all). In some ways though, it might have been good to let me have this all to myself. I have loved baseball for so long that I don’t remember not loving it; it has given me so much happiness over the years and I hope much more in the future. For one night 29 years of anger, sadness, stupidity, carelessness, and bad mojo just got swept away. Thank you, Kansas City. Damn that was awesome!

One thought on “Celebration At 1 Royal Way”