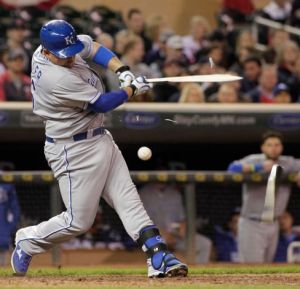 We are through eleven games so far into the 2014 campaign and to say the Kansas City Royals offense isn’t clicking is a major understatement. It’s been awful. Disgusting. Weak. Punchless. Craptastic. Describe it any way you want, they are simply not getting the job done. The good thing? We are only eleven games in. Seriously. I get that as Royals fans we are programmed to expect the worst, but the reaction of the fanbase this weekend was frightening. The season is over already? Eleven games, people. Chill out.

I heard a lot of ideas that fans had yesterday to fix this club. Fire Yost/Moore/Grifol? Sorry, it’s none of these guys’ fault. For once, the blame doesn’t fall on their shoulders. Trade Butler/Moustakas? To who? For what? Their value has never been lower, but they should trade them? The Royals wouldn’t get anything of value in return for them, so that is a pointless argument. Bring back Brett? I love George Brett, but he isn’t coming back and he shouldn’t. He isn’t what elevated this team last year; Grifol is the one who worked on Hosmer’s mechanics, not George. George was just there for motivation, which he was fine at, but he was the hitting coach in name only. To be honest, why would the Royals bring Brett back? Is that the answer every time this team struggles offensively? When I answered that question in my head, I kept coming back to the same thing: no more hand-holding. No more coddling. The younger core of this group has been in the majors now for over three years. They need to either produce or lose playing time. With that in mind, it got me to thinking of what the Royals should do. Now, I’m not totally sure I have the answer to this; hell, maybe I’m not even close. But if I was in charge, or even just asked my opinion, this is what I would do.

First thing I would do is shuffle the lineup. Move Eric Hosmer and Billy Butler from 3rd and 4th to 6th and 7th in the order respectively. I would then bump Alex Gordon and Salvador Perez from 5th and 6th up to 3rd and 4th. Gordon and Perez are at least having good at bats, with Perez getting off to one of the few good Royals starts to the season. I would then move Lorenzo Cain up from 8th to 5th in the order(nice call, Dalton!). Cain is also getting some key at bats, so he should be rewarded for it. With all these moves, it would move Mike Moustakas down from 7th to 8th in the order. Here is the thing though; I actually think Moose had some of the best at bats of the Minnesota series.

Did I just say that the guy hitting .111 had some of the best AB’s in that series? Yes, yes I did. Moose had 2 hits in Friday’s game and a hit in yesterday’s contest. Moustakas was also able to accumulate a walk in games 2 and 3 of the Minnesota series. Mike actually looks like he has a game plan when he steps up to the plate(unlike Hosmer and Butler) and is still taking quite a bit of pitches compared to the rest of the team. We even saw him drive the ball throughout the three games, so there is reason to believe that he is just a tick off and about go on a bit of a hitting streak. I know Moose is struggling and not hitting even close to how he was in Arizona this spring, but he doesn’t look lost like others do. I know it’s frustrating, but I’m willing to be a bit more patient with Moustakas, at least for awhile. 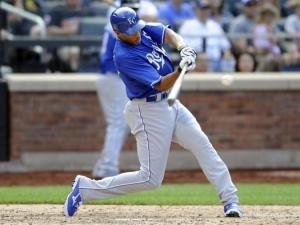 With all that lineup shuffling, I also think it wouldn’t hurt to have a few of the hitters struggling to sit out a game or two. Nothing major, just take a day off, no pressure and sit with hitting coach Pedro Grifol and go over a few things. Sometimes it just takes a different perspective to get your head on straight. Maybe let Justin Maxwell play a few games at DH while Danny Valencia gets some reps in at 1B or 3B. I know Ned Yost thinks it’s better to be in the lineup everyday to get out of a slump, but at this point it is just hurting the team. It won’t hurt for guys like Butler or Hosmer to sit out a game or two. In fact, Yost has a habit of not getting his bench players much playing time. Who already forgot Brett Hayes is on the roster? It looks like there has already been some work being done, as Grifol talked to Butler about moving off of the plate and stand in his normal spot in the batter’s box. It’s good to hear that a veteran like Butler is open to trying something, anything, to help his situation. A game or two talking baseball with Grifol might just be the thing for a few of these hitters. 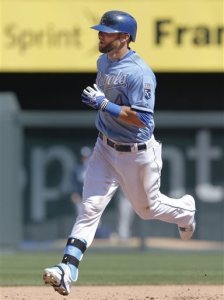 So it isn’t much, but that is what I would do to try and get the Royals offense going. Honestly, I don’t think a drastic event needs to happen for the hitters to come alive. They mainly just need to go out there, relax and try to keep it as simple as possible. This Royals offense has been living off of potential for years now; it’s time for them to either prove their worth or the team will have to consider Plan B. The Royals aren’t in a position where they can completely dismantle this team in the middle of the season, but something would have to be done if the offense continues to sputter along. The main thing is the blame needs to start falling on the players, not everyone else. 2014 could be the season we find out who really belongs and who needs to move on. But remember, we are only eleven games in; there is still lots of time to turn this thing around. Patience will be our greatest weapon.